THIS, THAT AND THE OTHER - SUNDAY MUSINGS 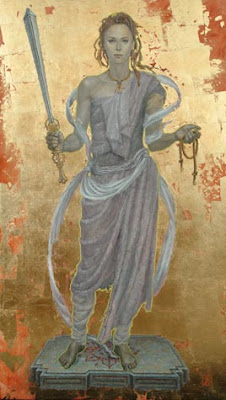 "Light Warrior"
Zoe Kaufman
**********
Musings on a few things that aren't long enough for posts of their own:

I love Christina Aguilera's song, "Fighter". I believe that all the events that have happened to me over the years have strengthened me. ("What does not kill you makes you stronger.") She writes, "After all you put me through you'd think I despise you but in the end I wanna thank you 'cause you made me that much stronger."
**********

"When I have money, I buy books. If any is left, I buy food and clothes."
(Erasmus)
Looking at the sorry state of my wardrobe, you would know this is certainly true of me.

The following was my horoscope the other day: "CANCER: You have money. Remember? Now where did you misplace it? Practice walking, talking and working your spunky self. Woe to the person who gets in your face, as you're a victim no more." As to the first part, now where did I put that pesky money? But the second part is certainly true. I am a victim no more.

Did you know that when lilacs have been blooming for about a week their color starts to fade? I had never noticed it before, but this year the lilac blooms were so thick and massive it must have been easier to notice when a whole block of color changed over time.

On Thursday's "ER", the new doc played by Stanley Tucci told the staff that they had better get used to his "authoritative style of management." Whoa! My head snapped up. Deja Vu!!! I had heard that phrase about a year ago, and that's a reason why I am no longer working at that place. The ER docs and nurses very much resented that comment, and so did I. I REFUSED to get used to that style of management. Authoritative only means "mean". I am a proponent of the theory that you can get more flies with honey than with vinegar.

I am reminded of Aesop's fable in which the sun and the wind had a contest to see who could get a man to remove his coat faster. The wind meanly blew and blew, but the man only wound his coat tighter about his body. The sun came out and gently warmed the man, causing him to soon shed his coat. I know I respond better to kindness, and I thought I had taught "the boss" that too, as she responded positively for a time. But although she may disguise them for a while, a leopard doesn't really ever change her spots.

Speaking of ER, what did Neela whisper to Ray? And if you were wondering what that haunting song was at the end of the show, it was Jeff Buckley's "Hallellujah." Read about Buckley and the song in my post from January.

Gracie has a new trick. Since we leave the patio door open when the weather is warm, she gets a running head start from outside, bounds up the steps and across the deck, gallops across the kitchen, dining room and living room and LEAPS onto the couch from five feet away! Woe to any person sitting on the couch.

I got a message this week from the human resource person at a business to which I had sent a job application. She tells me there are 80 applicants for the job. Oh, my. Well, it is one of the best paying positions I've seen, with some of the lowest requirements, so that stands to reason, but this is scary!

What with the high gas prices, I'm GLAD I'm not driving the 16-mile round trip to work every day.

My husband dug up half the front lawn two weeks ago and hasn't seeded it yet. My question is, what should I use to smack him over the head? I'm thinking the medium-size fry pan.

I went back and added more to my post about my Serenity and Grace Place. Can't forget the clothes, the yoga classes and the women's empowerment seminars!

Saturday is usually the day I watch my Netflix movies, since my husband doesn't like to watch DVDs and he always works Saturdays. Yesterday I watched "The Painted Veil" with Naomi Watts and Edward Norton, and last Saturday I watched "The White Countess" with Natasha Richardson and Ralph Fiennes. Veddy, veddy good in a Merchant/Ivory movie sort of way. At least the former was a M/I film. I don't think the latter was, but it has the same vibe. Now why, why can't studios made intelligent, well-scripted, well-acted movies like that for women in my age group? I am so sick of cartoons, sequels, action flicks, horror movies and re-makes of 60s TV shows filling up the theatres.

A British blogger recently mentioned "Miss Potter", about the life of Peter Rabbit creator Beatrix Potter. It isn't available on DVD here until June, but it is on my Netflix list. It stars Renee Zellweger, Ewan Macgregor and Emily Watson, so should also be veddy, veddy good.

DISCLAIMER: I would never really hit my husband with anything (though it would be fun to have a go with those big foam bats) and he has never hit me either. Although the song "Fighter" is about a male-female relationship, it is not about ours. My friends are always telling me what a great guy I have, and they are right.
Posted by Julie at 4:16 PM

Hi Julie Marie,
What a nice surprise to find your comments on my Potato Prints blog. I went back and read your two posts about Syttende Mai. I enjoyed seeing the recipes. You write with such passion! It seems inevitable that you and your sister will come to Stoughton next year. I'm amazed that you could take a stab at the blue bunad.

Good Morning. I ran across your link from Miss R's page, and wanted to stop in to say hello. I have been enjoying reading your post, and have added you to my bloglines so I can visit often.
Enjoy your day
Patty/Autumn

Hi, found you via... um... forget now, but I have enjoyed reading over your blog, and have 'borrowed' the 100 books list. Miss Potter - I saw it at the cinema a couple of months ago, and liked it so much, I rented it on DVD this weekend to watch again. Wonderful! You will enjoy it when it comes around.

Hi
I came here from Daisy's blog. You are right the book was Outlander...
you have a lovely blog and I will be back to visit!!
:-)