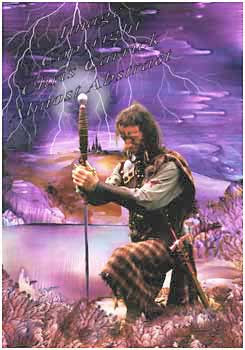 A HIGHLAND WARRIOR
**********
"Eat, Pray, Love," by Elizabeth Gilbert;
"The Magic of Ordinary Days," by Ann Howard Creel
"Outlaw Sword, "Son of the Sword",
"Sword of King James" all by Ardian J. Lee;
"The Year of Magical Thinking," by Joan Didion;
"Paint it Black," by Janet Fitch;
"The Last Templar," by Raymond Khoury;
**********
I have discussed "The Magic of Ordinary Days" and "Eat, Pray, Love" in previous posts, so I won't talk about them here.
The Ardian J. Lee books are set in the Scottish Highlands of the 1700s. The main character is a 20th century American man who finds himself transported three centuries back in time. If this sounds familiar, it is. The theme is almost identical to that of the Diana Gabaldon series that began with "Outlander." This time, though, we have a hero instead of a heroine. I loved "Outlander, " and have read it at least three times. I "made" my book club friends read it, even though they said it was "too loooong." That was 15 years ago, and they still talk about the handsome, charismatic Scotsman Jamie Frasier and his true love Claire. The "Outlander" series dwindled in quality as the series ran on. I was happy to find that this series maintained its quality. I also liked the fact that the hero is a reluctant warrior. Even though his hatred of the English is based on personal experience, he tries to avoid fighting and attempts to prevent the Battle of Culloden in which the Scots were so soundly defeated. With his knowledge of the future, he instead sets out to bring his clan into a better future than other Scots who were forced off their lands during the Highland Clearances. Since I plan to write a post about my love for Scottish books and movies, I won't discuss these books further right now.
The title of Joan Didion's book, "The Year of Magical Thinking" refers to her magical thinking - that her husband, the author John Gregory Dunne, wasn't really dead, even though all rational thought and outward appearances told her so. It is a powerful memoir of death, loss, sorrow, grief and magical thinking. (And not the least depressing.)
I enjoyed "The Last Templar" way more than "The Secret Supper," which I discussed in my March Books post, and about as well as or more than Dan Brown's "Da Vinci Code" and "Angels and Demons". All involve solving riddles/puzzles and the Catholic Church. The protagonists and antagonists in "The Last Templar" are racing against time and each other, trolling the world for a secret, coded manuscript that may stun and change the entire world as we know it if revealed. I found myself running to the computer to learn new things about the Knights Templar, the Gnostic Gospels and the Cathars. Plus, it's a ripping good story, with some romance thrown in to boot.
I really, really liked "Paint It Black." I thought I might, after having read Janet Fitch's "White Oleander." I empathised with the "heroine, " Josie, very much. She is what one might term "trailer park trash", from Bakersfield, California, but she is highly likable. Josie is a 20-year old bleached blond with black roots, wearing a yellow fur jacket, short skirts with ripped fishnet stockings, and too much mascara.
An artist's model, Josie falls in love with a sensitive young artist who has turned his back on his wealthy past and his overbearing mother. As you watch Josie react to her boyfriend's suicide and its aftermath, you realize that a person you might dismiss or reject as being undesirable is actually highly intelligent with many layers of personality that peel away to reveal a beautiful soul. I wasn't raised in a trailer and I wasn't a trashy dresser, but my family came from the wrong side of the tracks, so I know how hard it is to try to separate one's true personality from one's looks and background. I highly recommend this book.
Posted by Julie at 5:29 PM