FOR THE LOVE OF A TREE 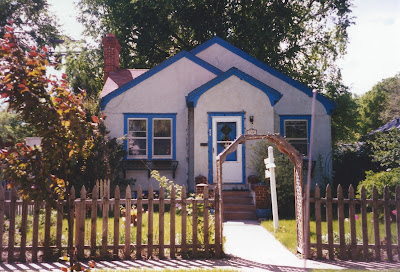 This is a picture of my house in Bismarck, ND. It isn't a recent photo - I've since installed a new door that isn't blue, and a new arbor. These days, a massive William Baffin rose climbs over the arbor. But aside from those changes, it looks about the same as it always has. At least it did, until a few days ago.
I have to admit I shed a few tears when I came home that afternoon, all because of a tree. When I pulled into  my driveway, I could see a huge gap behind my house that used to be filled by that giant American elm tree you see in the picture. I knew it was no longer there, but it upset me just the same.
You may remember that in October I posted about a giant limb from that tree falling on my house during a hurricane-force  windstorm. How it frightened  my dogs and me, and how I had to have the limb removed and my roof repaired due to the two big holes it caused.
The owner of the tree service that removed the limb advised me that the tree was irreparably damaged, and that it would have to come down. Realistically, I knew he was right. But when I saw the blank canvas left by the tree's removal, I felt like I was the executioner and that I had held the axe.
This tree, I'm sure, was about as old as my house, built in 1929. It had weathered so much, through at least three different owners. In our time alone, it made it through two microbursts and a catastrophic wind and rainstorm last June. (In that storm, a lot of live and dead limbs came down, but the strength of the tree was not affected.)  But by signing the contract to have the tree taken down, I feel like I signed its death warrant. I had thought for sure nothing would harm this tree, except Dutch elm disease.
One of the reasons that Dan and I bought this house, other than that it was a neat stucco cottage and was located in an old Bismarck neighborhood, was the fact that it had such wonderful trees. Yes, the boulevard trees were already gone, and we saw evidence of three threes that had once lived in a row at the back of our property. But there was a gorgeous weeping birch out front, an ancient  - and prolific - apple tree in the back, and that elm, probably one of the largest in town.
But one by one, we lost them. The weeping birch fell victim to a tiny insect, the bronze birch borer. The tree was already dead when we had it removed. The apple tree, a victim of all sorts of blights,  just plain fell over after a violent storm. And then the elm.
It's true, sometimes I had a love-hate relationship with the tree. In drought years, it produced millions of elm seeds, causing drifts of light green along the curbs, the seeds sprouting anywhere and everywhere they found a speck of dirt. Some year, it had aphids, whose sticky black sap was so hard to remove from cars and deck furniture. Other years, we had to deal with little green worms that spun down on nearly-invisible threads to unceremoniously land on our heads and in our dinner plates. The elm provided so much shade that grass would not grow under its canopy, and not many flowers either.
Some of the branches were already dead. Val, our foreign exchange student, was always afraid that one particular branch would fall on her head when she sat out on our deck. Val, it was an entirely different branch that fell on the house. "Your" branch stayed intact until the end.
But what wonderful shade that old tree provided. The deck was almost always cool and comfortable. There, I was able to grow my orchids, begonias and impatiens, and summer over my houseplants.  When the breeze was gentle, the branches swayed gracefully. Sometimes when it rained we could stay outside on the deck for a long time because the leaves protected us from the drops. I could tell when fall first arrived when the branch closest to the deck turned yellow overnight. And in the spring, it was the first branch to bud out.
Many summer evenings, after dinner, I would just lean back in my deck chair and stare up at the leaves, watching as they changed in color from light green to dark green to black as dusk descended. And after dark, I would seek out the moon and the brightest stars among the branches.
But now, the tree is  - simply - no more. Gone too are the squirrels who scolded our dogs from a safe vantage point. Gone are the chickadees and nut hatches who scrambled up and down the trunk in the wintertime.
I cannot believe how the landscape of my backyard has changed. That first afternoon afternoon I walked around the yard, stunned at the difference. I will never be able to garden the same again. Yes, maybe I can now have an actual lawn, and flower beds too. But will it have been worth it, after all?
﻿
﻿
Posted by Julie at 3:51 PM 7 comments: