THE END OF YOUR LIFE BOOK CLUB 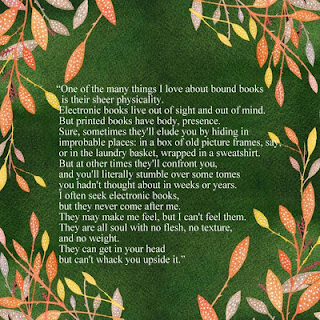 
"One of the many things I love about bound books
is their sheer physicality.
Electronic books live out of sight and out of mind.
But printed books have body, presence.
Sure, sometimes they'll elude you by hiding in
improbable places; in a box of old picture frames, say,
or in the laundry basket, wrapped in a sweatshirt.
But at other times they'll confront you,
and you'll literally stumble over some tomes
you hadn't thought about in weeks or years.
I often seek electronic books
but they never come after me.
They may make me feel, but I can't feel them.
They are all soul with no flesh, no texture,
and no weight.
They can get in your head
but can't whack you upside it."

Schwalbe's love of bound books reflects mine. In fact, I will not use a Kindle or Nook. We actually have a perfectly unused Nook that I bought for my husband at Christmas time two years ago. But for me, if it's not a bound book, it's not a "real" book.

I am sometimes frustrated by my bound books.  I know I have to weed them out but I am daunted by the task. The books overgrew my bookshelves years ago and a lot are stacked on the floor. Sometimes the stacks get knocked over and I have to stack them up again. Dust bunnies have a tendency to gather around them. And it's been way, way too long since I've dusted my bookshelves.

But I love the sight of my rows and rows of books. I love their dust jackets, which add so much color. When looking at them I can often remember the settings in which I read them. I remember the particular sensations that a particular book gave me.

I can look at my various bookshelves and detect geological-type "sedimentation" layers of reading history. The white metal bookshelf holds books I bought when I first joined my book club. It reflects the time when I fell in love with trade paperbacks and mostly turned my back on regular paperbacks.

In contrast, the built-in, dark wooden bookshelves in my dining room reflect a time when we moved into the house, when I was still reading Victoria Holt, Phyllis A. Whitney, Catherine Cookson, Daphne du Maurier (of course, "Rebecca" will always be a classic), Jean Auel and the like.

I like to put my nose in a new book and sniff the freshness of the pages. I have a friend who describes this experience as orgasmic, but I wouldn't go that far! 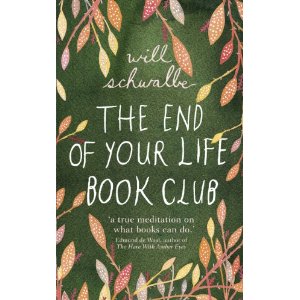 The quote at the top of this post comes from Will Schwalbe's new book, "The End of Your Life Book Club". I have read a lot of rave reviews about the book, which details the books he and his mother, noted humanitarian Mary Ann Schwalbe, read and then discussed while she was being treated for an advanced form of pancreatic cancer. Mary Ann knew she was dying and did pass away two years after her diagnosis. Hence, the title.
Several reviewers have said that the book has prompted them to go out and purchase many of the titles Schwalbe and his mother discussed. But as much as I want to read this book, with a husband having a diagnosis of Stage IV gastroesophageal cancer (currently in remission), I just can't bring it into the house. I certainly can't let Dan start thinking about which book will be the last one he ever reads.
It even freaks me out to think of the last book I will ever read. Will it be a junky beach read or a deeper tome which deserves to be the last book read in a person's life? I mean, I could be hit by a car today and the last book I would have read would be "The Book of Lost Fragrances: A Novel of Suspense" by M. J. Rose. It is, in fact, quite a good story, but it made me wonder - should I start reading only loftier books just in case my time is near??
﻿
Are there any books on your Book Bucket List that you've always meant to read but never got around to reading?﻿
﻿
Posted by Julie at 10:04 AM 6 comments: On our last evening in Colorado, we took the shuttle into Aspen. During the drive through town, we saw scores of young people spilling out of bars, their way of relaxing after the huge bike race that went through town earlier that day. We chose a more sedate option, and dined at Campo de Fiori, which I mentioned in a previous post. 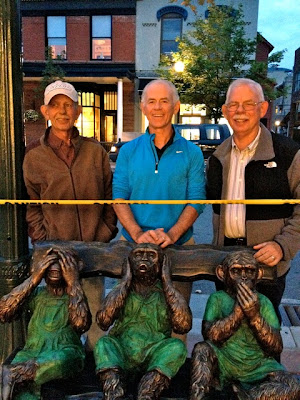 Dan, Scott, Dick
The Fredericksen Boys
After dinner, we still had plenty of time before we had to catch the shuttle, so we meandered aimlessly down the cobbled sidewalk. Outside an art gallery, we found the green-overalled, see/hear/speak no evil bronze monkeys seated on a bronze bench. We got as far as persuading the Fredericksen boys to pose behind the monkeys, but they stubbornly just WOULD NOT imitate them. Spoil sports, I say! 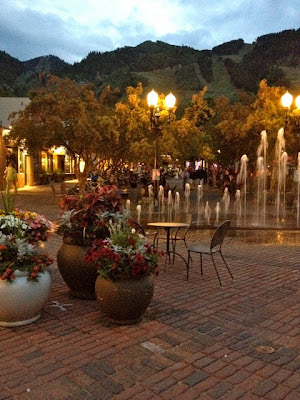 After the photo, we continued our meanderings. As we reached this beautiful plaza, we could hear the music of a Rolling Stones song. We were drawn, Pied Piper like, to a nearby park. We found a live band and a singer who looked, sang and Moved Like Jagger, to paraphrase Adam Levine. We thought it was great, but we were even more wowed as the next song began with the slow lyrics of the first verse:

Aah, "Stairway to Heaven", pitch perfect, voice perfect, Led Zeppelin perfect! We later learned that this was Anthem, a tribute band devoted to performing all of the best songs of the 1970s! 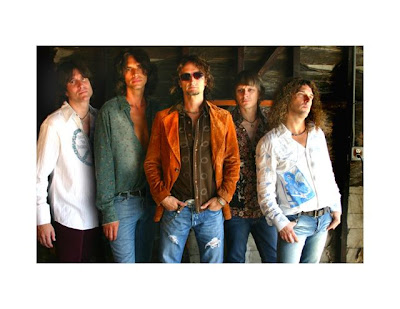 ﻿Anthem  has been described as "the ultimate 1970s tribute band, selecting songs based upon their ground-breaking influence during the period."

As the music segued from slow to fast, the singer screaming like Robert Plant - "And as we wind on down the road/Our shadows taller than our soul" - I looked around me. It was almost dark, but still just light enough to see that we were ringed by Aspen's beautiful dark blue mountains. The air was no longer hot, but still comfortable. Little children were tumbling on the grass, older kids were waving glow sticks and teens were being - well - teens.

Unhappily, the band announced that the next song would be their last. It was one of my most favorite songs from the entire era, Lynyrd Skynyrd's "Free Bird". Like the previous song, this one begins slowly:

"f I leave here tomorrow
Would you still remember me?
For I must be traveling on, now
'Caus there's too many places I've got to see"

I thought, I WILL be leaving here tomorrow, this 8,000 foot high paradise that blogger Brad Pierce describes as "a magical place where everyday life feels like a distant place, like you’re experiencing living in a bubble a million miles away.  It’s a place where fantasy is reality, where everything is perfect and life is good."

And Aspen won't remember me. And unlike the Free Bird, it's not new places I'll be going to see. Instead, I will be returning to the mundane world of home and work.

But I was going to enjoy the moment. We three couples - Dan and Julie, Scott and Dana, Dick and Bonny - were each arm-in-arm, gently swaying in unison to the slow beginning of the song. As it picked up tempo, we turned to leave, because we had to catch the shuttle back to Snowmass.

But on the walk back, with the music still playing loudly behind us, I did a little bit of head banging, ﻿because I had a spot of wine in me, because "Free Bird" still affects me the way it did 40 years ago, and because I still can.