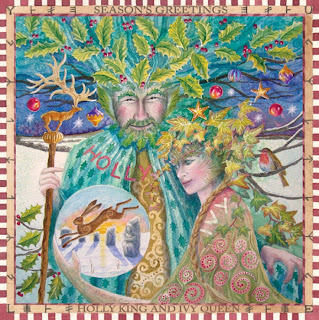 "HOLLY KING AND IVY QUEEN" by Wendy Andrews
I thought I'd post my Yule, or Winter Solstice, post today instead of tomorrow, because of a very rare celestial event that will happen after midnight tonight where I live.

For the first time in 372 years, the winter equinox and a total lunar eclipse are happening on the same day. The last time this occurred was in 1638. Imagine that! What a different world those eclipse viewers lived in! And this is only the second occurrence in 2000 years.

The start of the total eclipse for Central Standard Time is 1:40 a.m. and the time of greatest eclipse is at 2:17 a.m. At this point, the moon should appear as a coppery red.

To top it off the spectacle, the Ursid meteor shower will be peaking. Look near Ursa Major (the Big Dipper) for this display which will produce about 10-15 meteors per hour. It isn't necessarily a spectacular show as far as numbers are concerned but is known for producing bright meteors because they are somewhat larger.

Unfortunately, I probably won't be able to see any of this. We had five more inches of snow today, with promises of cloudy skies and flurries throughout the night.

So as consolation for me and anyone else who can't see the heavens tonight, here are some Yule/Solstice images and poems: 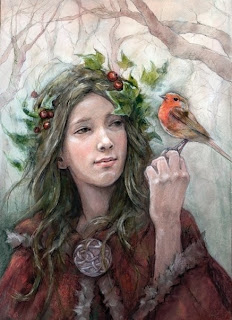 "And so the shortest day came and the year died
And everywhere down the centuries of the snow-white world
Came people singing, dancing,
To drive the dark away.
They lighted candles in the winter trees;
They hung their homes with evergreen;
They burned beseeching fires all night long
To keep the year alive,
And when the new year’s sunshine blazed awake
They shouted, reveling.
Through all the frosty ages you can hear them
Echoing behind us - Listen!!
All the long echoes sing the same delight,
This shortest day,
As promise wakens in the sleeping land:
They carol, fest, give thanks,
And dearly love their friends,
And hope for peace.
And so do we, here, now,
This year and every year.
Welcome Yule." 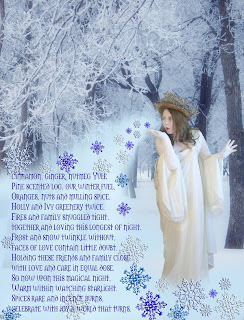 "Cinnamon, gingerbread, nutmeg yule
Pine-scented log, our winter fuel.
Oranges, nuts and mulling spice,
Holly and Ivy greenery twice.
Fires and family snuggled tight
together and loving this longest of night.
Frost and snow twinkle without,
faces of love contain little doubt.
Holding these friends and family close,
with love and care in equal dose.
So now upon this magical night
Warm within watching starlight.
Spices rare and incense burns
celebrate with joy a world that turns." 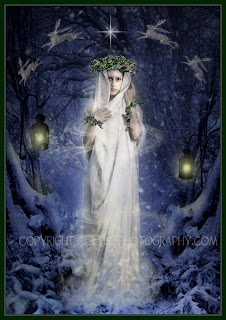 But of each thing a little spark, preserved
and tended by the ones who serve the flame
survives to light embryo season's birth,
'til life returns one more, vibrant and green.
Reaching higher each day the pale sun curves,
not strong enough to set the sky aflame.
So while nature languishes in dearth,
this darkest night the solstice fires burn."


("Frost -wolf" is a reference to the names of the full moons. The wolf moon is the last full moon of the pagan year and so its "icy breath" is the air during the long nights around solstice.) 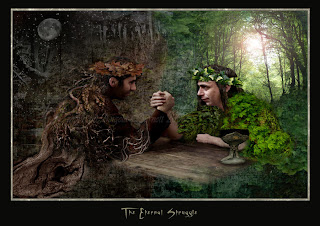 ﻿
"THE ETERNAL STRUGGLE" by Angela Jayne Barnett
(between the Oak King and the Holly King)
(At the winter solstice, the Oak King defeats the Holly King and rules for the next half of the year - until Midsummer's Day.)
"Time of deepest darkness
The God is born anew
Seedling in the frozen earth
Awaiting springtime dew.

The ground, an icy wasteland,
Though neighbors hearts are warm
We share our goods with everyone
So no one comes to harm.

Snow lies on her shoulders
Frosted mantle for her hair
Winter's Queen is giving birth
The Goddess, always there.

The sun is growing brighter.
It happens every year
Promising return of light
For sod and oak and deer.

Stag King, his mighty antlers
Rising from a drift
Leaps for the hunter's arrow
Just as strong and swift.
He knows his time has ended

He is heading to the plain
Where joy caresses memory
Like softly summer rain.

New fawn takes his first step,
The buck he will become.
After the time of knowing
A new year has begun." 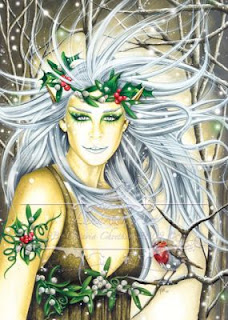 "Before going to bed
After a fall of snow
I look out on the field
Shining there in the moonlight
So calm, untouched and white
Snow silence fills my head
After I leave the window.

Hours later near dawn
When I look down again
The whole landscape has changed
The perfect surface gone
Criss-crossed and written on
Where the wild creatures ranged
While the moon rose and shone.

Why did my dog not bark?
Why did I hear no sound
There on the snow-locked ground
In the tumultuous dark?

How much can come, how much can go
When the December moon is bright,
What worlds of play we'll never know
Sleeping away the cold white night
After a fall of snow." 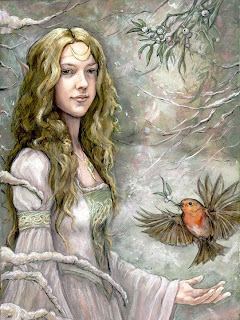 ﻿
"WINTER GIFT" by Julia Helen Jeffrey
*********
I am the Christmas Spirit
That comes with the end of December:
A winter solstice spell, perhaps,
When people forget to remember –
The drab realities of fact,
The cherished hurt of ancient wrongs,
The lonely comfort of being deaf
To human sighs and angel’s songs.
Suddenly, they lose their minds
To heart’s demands and beauty’s grace;
And deeds extravagant with love
Give glory to the common place.
--Anthony F. Perrino
Posted by Julie at 8:31 PM 6 comments: