WHEN LILACS LAST IN THE DOOR-YARD BLOOMED (Walt Whitman) 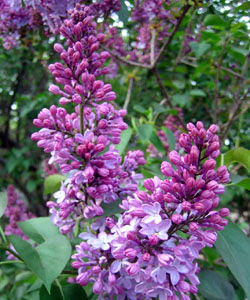 I haven't felt well the past few days. I wasn't really ill, but I wasn't well either. It was a kind of malaise, a restlessness, an uneasy feeling coursing through my veins. This morning, though, all those vague symptoms erupted into true unwellness (not a word, I know). I woke up with a sick headache, a weak, sweaty feeling, an unsteadiness on the pegs and a knot in my chest. (No, I'm not having a heart attack!) The knot part is something esophageal, having started last night while I was eating. Whenever I swallow (even liquid) it feels like a big lump slowly and painfully making its way down. (I wish it would prevent me from eating, but it doesn't.)

Therefore, I spent most of the day in bed, sandwiched between two dogs. (Hey guys, thanks for the support and empathy, but it was hot today!) So it wasn't until about 5:00 that I made my way to the kitchen. When I did, I was met by a wave of warm, lilac-scented air. Our neighbors on the corner have a solid wall of lilac bushes on the south and north sides of their yard. The scent molecules from hundreds - perhaps thousands - of just-opened lilacs came flowing right in through the open patio door.

Amy Lowell published the poem "Lilacs" in 1925. Up to now, I had been familiar with only these lines:

**********
"Making poetry out of a bit of moonlight
And a hundred or two sharp blossoms."
**********
"You are of elm-shaded streets
with little shops where they sell kites and marbles."
**********
"You persuaded the housewife
that her dish pan was of silver."
Or the lines below, to the left of the photo featuring the lilac's distinctive heart-shaped leaf: 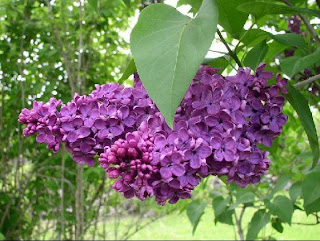 "YOU ARE THE GREAT
FLOOD OF OUR SOULS

BURSTING ABOVE THE LEAF SHAPES OF OUR HEARTS"


However much she understood and appreciated lilacs, Amy irritates me a bit. She seems to be saying that lilacs ARE New England. She enumerates: lilacs of Connecticut, of New Hampshire, Rhode Island, Massachusetts, Vermont, Maine. But, dear Miss Lowell, lilacs are North Dakota too. Although she wrote the following lines about New England lilacs, they evoke in me prairie scenes:

**********
"Lilacs watching a deserted house
Settling sideways into the grass of an old road;
Lilacs, wind-beaten, staggering under a lopsided shock of bloom
Above a cellar dug in a hill."
**********
Dilapidated old farm houses and barns dot the North Dakota countryside, sagging slowly back into the earth. Sometimes only the foundation is left, but often, beside that very same foundation, or the ghost of a shanty, a sod house or a dugout, is an old, old lilac bush, probably planted by homesteaders.
**********
"Pale ghosts who planted you came in the night-time
And let their thin hair blow through your clustered stems."
**********
In the yard of our first home in Larson, there were two large lilac bushes, one on each side of the front gate. We carved a little cave into the side of one. During the winters, snowbanks would form over the top of the bushes, completely hiding them. We would climb up the solidly-packed "hills" and sled down the other side. How those bushes must have taken a beating! In fact, they looked pretty scraggly and were bloom-less by the time we moved to our next house.

Because lilacs bloom weeks later in northern North Dakota, to me, they are inextricably entwined with Memorial Day and the sight of Old Glory. They are also entwined with memories of Vacation Bible School. We would pick heaps of blossoms at lunch time and they would add a heady scent to our afternoon lessons in the little white steepled church. I love how lilacs look against the weathered silvery gray of wooden houses that were once painted white.

Three years ago, my sister, my niece and I took a spin through Larson after we cleaned out our aunt's house in Crosby. I hadn't been back there for years. That first house had burned down a long time ago. The huge elm tree where I used to sit on a low-spreading limb and read for hours is gone. Overgrown prairie grasses hid the foundation. "The prairie has taken over," I bawled.

But there, on both sides of a path that leads to a front-door that is no longer there, were two huge, magnificent lilac bushes in full bloom. Left to their own devices, they came back stronger than ever. I picked as many blooms as I could, and the scent carried us home.
Lilacs last about a week. That's not very much when you have to wait a whole year for them. I am going to pull myself together this evening and - sick or not - walk around the corner to inhale the scent of a lilac. Some years, when there is a late frost, the lilacs don't bloom at all, and I mourn. This year, when they are so abundant, but are still gone so quickly, I am going to do a lot of inhaling while I can.

To read "Lilacs" in its entirety, click on: http://users.pandora.be/gaston.d.haese/lowell_lilacs.html 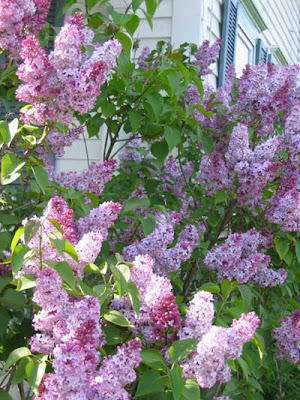 (One can't have TOO many pictures of lilacs)

Those are so beautiful!
Especially the last photo of the sun flooding through them!
(You aren't having an allergic reaction to them and feeling bad from their perfumed air?!?)
Hope you are better soon!

I adore Lilacs, we have a large lilac tree in the land behind our garden and it is in full blossom now, so beautiful. I hope you are feeling better soon.

So sorry to hear you're not feeling well. I hope that will pass very soon. I loved reading about your love of lilacs. My mother is absolutely nuts over lilacs and has been for as long as I can remember. The annual Lilac Festival in Rochester, New York, which is about 2 hours away from where I live, is starting this weekend. I haven't been there for many, many years. Me, I'm a pansy person :-)

This was just all so touching and more than that, it makes me want to visit North Dakota!

Stopping by to say I'm thinking of you and that I hope you are feeling better.