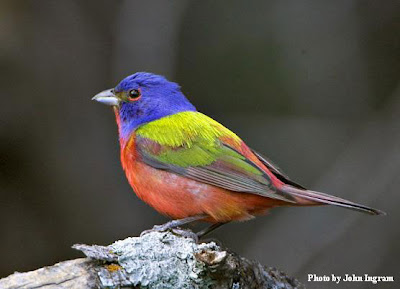 This little fellow, a painted bunting, has caused some big excitement in North Dakota recently, because it is the first one ever seen in our state. It was spotted last week, hanging around a bird feeder in a yard in Dickinson, which is 90 miles west of Bismarck on I-94. Dedicated birders from Bismarck, Grand Forks, Fargo, and all around the state made the trip to see this brilliantly-colored little treasure who seems to have accidentally migrated too far North. I would hop in the car and go see it myself, if it were not for the report that it hasn't been seen for a few days and has probably moved on.
I have loved birds all my life. As I child, I made carbon-copy drawings of all the birds in our World Book Encyclopedia. I bought bird models, the plastic kind you paint. I wonder what my mother ever did with them because I sure would like to have them now. I collected matchbooks that featured birds on their covers. I loved the flashy one the best: blue jays, cardinals, scarlet tanagers, painted buntings, and all those other brilliantly-colored birds that were not native to western North Dakota.
There aren't a whole lot of impressive-looking birds where I grew up. The western meadowlark, Baltimore oriole and the barn swallows were about the prettiest birds we had. Of course we had crows, sparrows, robins, thrushes, magpies, hawks and those pesky Western king birds. I took them for granted.
My favorites were the ones splashed with a dollop of bright color, like the red-wing and yellow-headed blackbirds that you could spot hanging from cattails in sloughs beside the road. One of my best memories ever is seeing a rose-breasted grosbeak in a tree at Turtle River State Park near Grand Forks. It was so beautiful that I couldn't believe it was real.
Speaking of being so beautiful as to seem unreal, my husband and I were so blessed to have a cardinal family in our yard for a few years. I say blessed because cardinals are not common in Bismarck. One early Sunday morning my husband went to get a paper. When he came back he spotted a man standing in our driveway. Dan was upset, rightly so. "I'm just here to see the northern cardinal," the man stated. Dan suggested quite firmly that he remove himself from private property and "look for the northern cardinal elsewhere".
The sight of one lone cardinal making a bright red exclamation mark in a tree full of white crab apple blossoms will stay with me forever. However, I enjoyed his drab little mate too. She liked to sit on a branch and watch me garden. And the sound the male would make from his perch on a high wire! "Purdy, purdy, purdy," he'd boast, as if he knew exactly how beautiful he was.
As I have previously posted, we have blue jays that visit our yard, and waxwings (Bohemian or cedar?), goldfinches, black-capped chickadees, wrens, and once, oh glorious day, a hummingbird, buzzing low to the ground, visiting me as I planted lambs ears.
I want to see more pretty birds. However, I'm not a birder. It's not my quest to find every bird ever spotted in the state. The thought of standing in a slough on a cold misty morning does not ring my chimes at all. Frankly (birdwatchers would kill me if they knew), I think making a list of every kind of native sparrow would be boring.
What I want most right now is to see a bluebird. Although bluebirds are making a comeback in North Dakota, thanks in part to a wonderful group of people who make bluebird nesting boxes, I have never seen one. I know that there are trails of bluebird boxes in the state. I plan to check out at least one if not more trails this summer. I understand there is one at the Assumption Abbey at Richardton, with boxes made by Bismarck Boy Scouts and tended by one of the Benedictine monks.
Oh, and even if he is not brightly colored, I want to see at least one bald eagle.
Posted by Julie at 10:59 AM

Those birds...Painted Buntings...are so colorful, no one would believe it was "realistic" if I did a watercolor! They'd think I was just trying all the colors!

Only nature could make something so real looks so unreal. Gorgeous.

Your stories of your collections are heartwarming and a reminder to me of why I don't get rid of my children's "stuff" much to my DH's chagrin.

I love birds, oh to see one like you've pictured...an elusive little painting flying around! WOW! We get finches, sparrows, doves, bluejays, blackbirds/crows and grackles. I want so badly to see a Robin or a bluebird...I don't think I've ever seen either here. Alas!

Wow, what a gorgeous bird!! Thank you for recommending Cider with Rosie. I will be sure to see if my library has it!
Kelli

painted buntings...what an enchanting name for such a beautiful little bird. i was born and raised in south dakota so i'm familiar with 'your' birds :-)
i always wanted world book encyclopedia's, my cousins had them, but my mother insisted that what she had ordered, the encyclopedia americana was a great set of books. then why didn't it have those gorgeous color photos and lots of black and white pictures that world book did. almost totally words, itty, bitty, columns of words - nothing that held my interest. oh, except for the texture of the paper it was printed on...smooth and fairly thin, of very high qualtiy i would guess. i did enjoy turning the pages...