ON MEMORIAL DAY, I REMEMBER 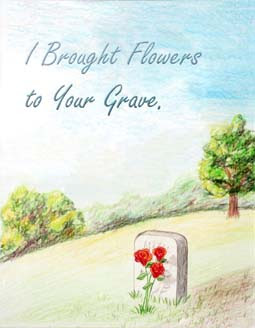 (By Tom Chapman)
**********
Dear Mom and Brother John,
Sorry, I did not bring flowers to your graves this year. In fact, it has been four years since Glori, Kelsey and I were at the tiny Larson cemetery on the crest of the little hill overlooking the village where we had so many good years.
I am sure the crosses, ribbons and silk flowers are faded by now. Maybe someone finally tossed them away, although I don't know if the cemetery association is still active. Sorry. I just can't bear to go up that way anymore. It's too depressing. My people are gone; only tombstones remain. The schools are closed, houses are empty, storefronts are bare and bleak, the prairie is reclaiming the land. Northwestern North Dakota was never highly-populated. Now its faced with extreme out migration.
I have to tell you about the last time we visited you. It was Memorial Day weekend, and we had just buried Aunt Mary ourselves. Mary had died at the end of March, and was cremated. We arranged to come up to Crosby over the long holiday weekend and oversee her burial. I had envisioned that the undertaker would be there to place the container in the carefully-dug hole, and the pastor would say some words. Maybe not a full graveside ceremony for just the three of us, but a few words, surely. What a surprise we had in store for us.
When the weekend came near, I called the undertaker to verify arrangements. To my shock I found out that he and the pastor would be out of town for the long weekend, but he would "leave the mortuary's garage unlocked so we could pick up the ashes." Allllrighty then. No words from the pastor, okay, WE could say some words or recite a poem, then place the ashes in the hole. "No, he said, "You have to dig the hole yourself."
Picking up the ashes from the garage was surreal enough. They were in a baggie in a hard black plastic container inside a cardboard box. I was not prepared for this. Then out to the cemetery. This is Memorial Day weekend, you understand, with lots of people placing flowers and grooming graves, and there we were digging a hole. I'm sure people thought we were grave robbers.
The ground was so hard we thought of giving up and throwing the ashes over the fence, but that is illegal in this state. Eventually, we managed to get a shallow hole dug and the ashes placed. The replaced turf stuck up higher than the rest of the ground, but we didn't care. Hopefully the granite marker would settle the dirt. The more this strange day played out, the more macabre it got, and we reacted by getting silly. We even have photos of us taking turns digging the hole, taken by a friend of Mary's who came out to the cemetery with us. So even in the midst of sadness we found laughter, albeit somewhat ghoulish.
Today, I place flowers in spirit on your two graves at Larson. Glori and Kelsey would add flowers for Ole. In Crosby, I place flowers at Mary's, Grandma Julia's, Grandpa Duncan's and Uncle Billy's graves. In Valley City, at Uncle Donny's grave. In Montana at Uncle David's, in Minnesota at Aunt Ina's. In Washington at Uncle Scotty's. In California at Brother Ron's.
So many gone. I love and miss you all.
Posted by Julie at 9:55 AM