ONCE IN A BLUE MOON 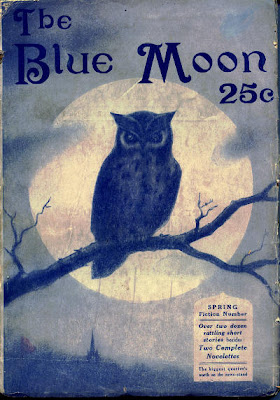 I almost missed it. The Blue Moon, that is. A Blue Moon is defined as the second time in a calendar month in which the moon is full. I was going by the calendar in my kitchen, which says that the month of June, rather than May, has two full moons. Lila at "Indigo Pears" (see link at right) says today is The Blue Moon, so I decided to check it out and found out that Lila was right.

For those of us in the United States, The Blue Moon appears tonight. The makers of my calendar must have been English. England (and I assume all of the British Isles?) will celebrate two full moons in June, with the Blue Moon appearing on June 30. 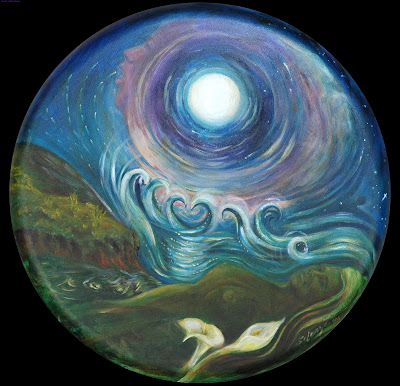 Today, the phrase "Once in a Blue Moon" means something that happens only rarely or fairly infrequently. In actuality, the Blue Moon happens only once about every 2.5 years.

The reason for the rarity of The Blue Moon is that the 29.53 days between full moons is just slightly shorter than the number of days in the average month.

Just as the moon is not made of green cheese, a Blue Moon will not appear blue. It won't look any different than the regular full moon, and it has no more effect on human behavior than any other full moon.

However, there have been rare occasions when the moon really did turn blue. After the volcano in Krakatoa ("East of Java") erupted, the moon appeared blue for two years, because of all the volcanic dust in the air. In 1927, extremely dry conditions in India caused the moon to appear blue. In 1951, smoke and dust from forest fires in Canada also turned the moon "blue."

The term "Blue Moon", however, has been around for centuries, and only took on the meaning of an infrequent event in the 20th century. Blue Moon is a term that is derived from common language usage of hundreds of years ago. A pamphlet printed in 1528 contained the phrase, "If you say the moon is blue, we must believe that it is true."

The first meaning of Blue Moon was "never". So if an 18th Century gentleman told a maid, "I'll marry you, m'lady, when the moon is blue," she would have wasted her time creating a trousseau.

According to certain folklore, it is said that when there is a blue moon, "the moon has a face and talks to items in its moonlight."

In recent years, the phrase "Blue Moon" has been a symbol of sadness and loneliness: "Blue Moon, you left me standing along, without a love of my own" . . . .

In my lifetime, "Blue Moon" has been a much-used name for night clubs or supper clubs. My Aunt Ina (the world traveler - to the faraway land of Montana) always raved about the famed "Blue Moon" supper club in Plentywood, MT. A few years ago, my husband and I happened to be in Plentywood, and The Blue Moon" is still there, 40-some years after I first heard about it and dreamed about it as a place of ballroom dancing, fancy food, exotic drinks and romance. (My husband, not being a romantic, chose a dining place with fast service so that the dogs would not be alone too long.) It would have been fun to check out Plentywood's Blue Moon, which I imagined to be decorated in silver stars and navy blue walls. (Perhaps it is best for my romantic dreams that we did not dine at The Blue Moon.)

On those occasions when one waxes nostalgic, even after never-experienced events, perhaps one should partake of a "Blue Moon Martini", in which the two-most featured components are Bombay Sapphire Blue Gin and Blue Curacao.

Yes our Blue Moon in England is at the end of June. Though our moon at the moment is the most beautiful golden colour, after last month's silvery one.

What an interesting post, I didn't realise that our Blue Moon was at a different time to the US one though I do know that tonight is full moon here. I wasn't really keeping track properly and when I read on another blog that last night was the Blue Moon I accepted it. It was too cloudy to see anyway! Now I discover that I haven't missed it after all:)