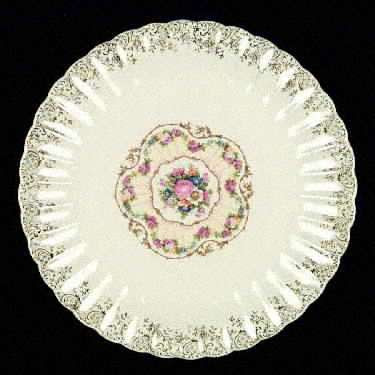 My sister Glori and I went poking around an antique mall on Saturday. I bought a few odds and ends: A book, some silver serving pieces, a little pie bird, a Gurley candle, all for just a few dollars each. I also spotted the china above. This is the American Limoges "Toledo Delight " pattern in the "sand" color, the same pattern Dan's mother used for her best china.

After Lil died, Dan's brother Gordon, as the oldest of the four brothers, claimed the china. This really pissed off Dan. Among other things, we inherited Lil's freezer, which was still full of frozen goods. There, under a layer of angel food cake slices, was one of the plates. It had a hairline crack, so Lil must have felt it was okay to put in the freezer. "At least Gordon didn't get that one," Dan remarked. We have treasured that plate for 14 years.

So, when I spotted eight dinner plates, a big platter and one saucer all for $28.00, I debated about whether or not I should get them. Was Dan really attached to that pattern, or was he just mad that Gordon got it (Gordon not being his favorite brother)? I decided to leave it and ask Dan when I got home. His answer was immediate. "Get it!" he said. I checked this pattern out on EBay and elsewhere on the Internet, and found I would be getting a very good deal on the pieces.

So today, I went back and purchased the set. This will now be our best china. Our previous "best" china had been purhased piece by piece through a grocery-store promotion. We don't mind if there are no matching cups and saucers, and it will be fun to look for the odd serving piece here and there.

While at the antique mall today, I found something else: The print shown below, Maxfield Parrish's "Enchantment", in a gorgeous ornate gold frame. Although I was not planning to purchase anything more, I bought it. I had planned that, when I got a new job, I would treat myself to a print of J. W. Waterhouse's "The Lady of Shalott". But I can order that print on the net anytime, and I am very fond of Parrish's work, so I went for it. And, as the shopkeeper said when she was wrapping my purchases: "And were you planning to line your coffin with the money you had saved your whole life?"

That clinched it. "Enchantment" is now hanging in a place of honor in my living room. 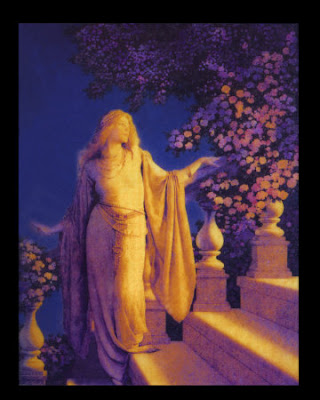 I love that you found the china you will enjoy using for 'best' and that picture is beautiful. What a good day's shopping!

Antique stores are so much fun. I love that plate. I don't think I have seen that pattern before. The picture is lovely, I have a huge print of the lady of shalott hanging over my couch and love it. The one you bought would go nice with it.

That china is so pretty. What a lucky find. Dan's mom must be really smiling from above.

How was your first day on the new job?

Love your shopping story and all the wonderful things you found!

Your new china is just beautiful, what a wonderful find!
Kelli