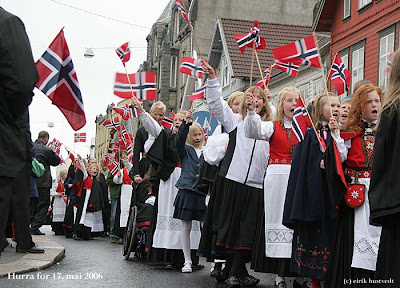 Syttende Mai (sitten duh MY), or May 17, is Norwegian Independence Day or Constitution Day. It is Norway's Fourth of July, if you will. Celebrated with children's parades in Norway, it observes the day Norway won its independence from Denmark in 1814.

Syttende Mai is also celebrated among Americans of Norwegian descent. If I were in Seattle today, I could attend a parade and hear speeches and proclamations. If I were in Wisconsin, I could attend several celebrations, including those in Stoughton and Westby, which would include folk dancing, woodcarving, fiddle music, traditional costume fashion shows, trolls for sale, demonstrations of hardanger (Norwegian cutwork embroidery) and rosemaling (Norwegian tole painting), and of course huge smorgasbords of Norwegian foods.

Even here in North Dakota, I could find Syttende Mai festivities in Minot, Grand Forks and Fargo. North Dakota was settled by Scandinavian immigrants in the Red River Valley, where Grand Forks and Fargo are located, and all across the upper half of the state. For some reason, the Scandinavians arrived via the Great Northern Railroad, which traversed that part of ND. The Germans From Russia came in on the Northern Pacific Railroad, which ran across the southern part of the state, including through Bismarck.

Therefore, we don't have a lot of fellow Norwegian celebrants around here. There is a Sons of Norway chapter in Bismarck, and I did attend one meeting, but the members were SO old (this was some years ago - I'd probably fit in better now). There is a stabbur, or Norwegian storehouse, in a local park, which sometimes is the scene of Syttende Mai celebrations. I used to wear a rosette in the colors of the Norwegian flag - red, white and navy blue - until someone asked me what prize I won at the State Fair.

Years ago, while a reporter at the Tribune, I did a story on a lovely Norwegian American lady who invited people to her home on Syttende Mai for fruit soup, pastries and, of course, coffee. She and her daughter, who hosted one party in the morning and one in the afternoon, would wear traditional Norwegian costumes called bunads, along with their solje, the beautiful Norwegian filigree silver jewelry.

The entire home was decorated with Bing & Grondal and Royal Copenhagen plates, beautiful sky blue hardanger tablecloths and runners, Norwegian pewter, rosemaling and framed immigration records. As a parting gift, she gave each guest a small piece of her handworked hardanger. The next year, she invited me as a guest. However, she warned me (in typical Norwegian "tell it like it is" fashion), "Now, dear, you won't be invited every year. There are just too many people on my guest list."

To celebrate Syttende Mai, my sister and I are going out to lunch, but we won't find any Norwegian delicacies to order. One could find a variety of German foods, from knoephle (potato and dumpling) soup to fleischkuechle (deep fried meat pie) and kuchen (fruit filled pastry). But there will be no lutefisk, lefse, Norwegian meatballs, risengrot (rice pudding), rommegrot (sour cream pudding), rullepulse (meat roll) or fruit soup to be found in any restaurant in town.

We won't be having any of the lovely Norwegian cookies and pastries like sandbakkels, fattigman, spritz, rosettes or krumkakke. The trouble with most of these treats is that you need special equipment to make them. Neither of us has a lefse griddle either. (Lefse, pronounced lefsa and made with mashed potatoes, is something like a Norwegian tortilla.) I prefer to spread my lefse round with butter and sugar and roll it up.

About the only thing we could find around here that's Norwegian would be Aunt Julia's lefse in the grocery store, and maybe some pickled herring and aquavit. Given that we don't like pickled herring, that's out. Speaking of not liking something, we both hate lutefisk too. If you don't know what lutefisk is, it is codfish that's been preserved with lye and cooked to a stinky, rubbery mess. There is a many-versed song about lefse, sung to the tune of "Oh Tannenbaum": Oh lutefisk, how I love you, you smell yust like an overshoe.

My Aunt Mary used to profess her love for lutefisk, and I would reply, "Why do you only have it on Christmas Eve then?" We Johnson kids made sure to stay away from Grandma's house on Christmas Eve. It would be safe to go there on Christmas Day, when the smell of turkey roasting in the oven covered up any lingering trace of old overshoe.

Glori and I will probably do our usual, a Chinese buffet. We'll say skoal over a couple of Cokes, and throw in an uffda now and then. Later we may visit the Norwegian shop, The Stabo, and buy one of the Suzanne Toftey tiles that we both collect.

Here are a couple of Norwegian recipes that even I can make:

**********
NORSKE (NORWEGIAN) MEATBALLS
1 pound ground round steak
1/2 pound ground pork
1/2 pound ground veal
1 onion, chopped
1 cup cracker crumbs
1/2 teaspoon nutmeg
Salt and pepper to taste
Mix together and form into balls the size of a walnut. Brown in a skillet, add water and simmer for 3/4 of an hour. Thicken with white sauce for gravy. 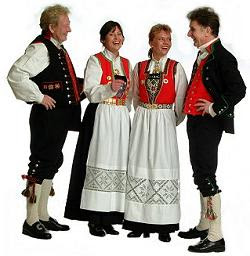 Above: Traditional Norwegian Costumes, or Bunads
Below: The Norwegian Stave Church in Minot, ND
(The big red object in the lower left corner is a Swedish Dala Horse) 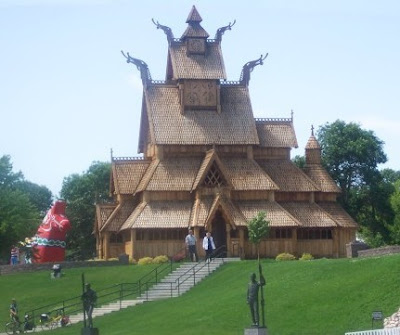 Norway has some wonderful dishes...I'll check out those recipes more later...I bet my good friend who reads your blog will love this post!

This was fascinating and the church looks like something right out of a fairy tale. I have never seen anything like it but I would love to see it in person.