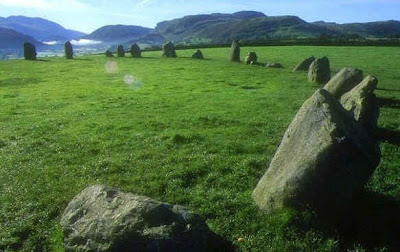 The Standing Stones of Castlerigg Stone Circle, Cumbria, England
**********
In a post written yesterday, Daisy Lupin of "Cats in the Kitchen, Flora in the Garden" wrote about the phenomenon of liminal times and spaces. I have never heard of these mysterious events (or at least I had never heard them identified as such), but evidently they are thresholds betwixt and between two realities, where you can pass through a portal into another reality. (Instead of my having to repeat all of Daisy information, read her post at the link under "Blogging Kindred Spirits" listed on the right side of my blog).
After reading her post I had a better understanding of an event that happened to me not quite 25 years ago. My husband and I and another couple were spending a June day fishing and boating on Lake Sakakawea, a huge man-made lake created from the damming of the Missouri River. (North Dakotans spell Lewis and Clark's guide's name Sakakawea.)

In order to eat lunch, we pulled up to an island and got out onto a nondescript beach. After eating, the others relaxed and I wandered down the shore. Rounding a corner, I came upon a dozen or so huge boulders scattered along the sand. I knew that they could not be sedimentary concretions like the famous boulders of Moeraki, New Zealand, because the Missouri was only dammed in the 1950s. I know that the glaciers that once covered North Dakota deposited big granite rocks from Canada that farmers have to pick out of the fields each spring, but I had never seen such huge boulders, or ones gathered in a group. They appeared as if a giant hand had tossed them on the ground like bowling balls.

Entranced, I hauled my eight-month's-pregnant self onto one of the boulders and sat looking out at the lake. It wasn't cloudy or foggy that day, but all of a sudden the boundary line between the lake and the sky disappeared. You could not tell where one ended and one began (which can be very disconcerting, visually). I was looking at one silvery, misty continuum of . . . ummm . . . space. Exactly as Daisy describes it, the air was hazy and shimmery.

It seemed to me that if I could look long enough or hard enough I could see through to "the other side" and find . . . ?? I don't know. Something. And why did I think of it as "the other side?
"
What I do know, though, was that it was a transcendent experience for me. I have read about standing stones like the ones at Stonehenge, Avebury and the circle shown above, and know they are considered mystical places. My stones may not have been standing or placed by human hand, but they created the same otherworldly effect.

I returned to the picnic spot, not long after - I thought - I had left it. The other three exclaimed how long I had been gone. They were afraid I had gotten lost or fallen in the lake. How absurd, I thought, they could have just walked 'round the bend and found me.

But could they have? Maybe I wouldn't have been there. Maybe I was in another time and space, a liminal time and space that gave me an enormous sense of calm, peace and oneness with the universe (believe me, I am not a New Ager and do not - have never had - these feelings before or since.) Was it the place? Is there a mystical spot in the middle of Lake Sakakawea? Did an Indian village exist on that spot? Or was I, because of hormones, in a more receptive state? Was it a time of thinning of the veil? I'll never know.

The story doesn't end there. We returned to Bismarck, and the very next morning, our home burned down, leaving us with only our clothes, our cars and our dog. For a long time I have pondered why God/Higher Power/Wakan Tanka (Lakota Great Spirit) had given me such a great gift one day, and handed me such a great sorrow the next.

But now that I have read Daisy's post, I realize that it was perhaps just a sign that great changes would be coming to me. Within weeks, I was a mother for the first time. Within months, I had a brand new home. At the time I thought that adjusting to the loss - and to even such a welcome gift as a child - were the hardest things I have ever had to do. Now, of course, the sharp edges of those difficulties have been weathered by time into a form that seems remarkably like those smooth, round, ages-old boulders, pummeled and shaped by time and water.

If I ever have such an experience again - and I hope I do - I will greet it and embrace it.
Posted by Julie at 6:46 PM

Yes, you are exactly right that was a liminal time experience. You describe so accurately. Now I will tell you something, your photo of Castleriggs stone circle, about Keswick is about sixty miles from where I live. I stood in that circle about 30 years ago and had a liminal experience. I will blog about it on my next posting.

"Sharp edges weathered by time" So evocative, Julie. I'm must catching up on some reading. Deeply moving.