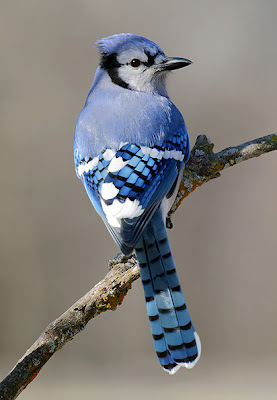 Standing at the patio door this morning, I saw a single blue jay in my honeysuckle bush, sitting quietly and gazing contemplatively at the neighbor's yard.

This was interesting on two levels. First, I have never seen a blue jay in our yard until later in the season, perhaps July. And secondly, the jay was alone, and it was being quiet. We didn't have blue jays in northwestern North Dakota where I grew up, so I always thought I'd be thrilled to be around them. I was wrong.

Sure, I love their striking color, but they are always squabbling with each other. As I mentioned before, I usually don't see them until later in the summer, when a bunch of them swoop into the yard, start "arguing and scrapping" with each other, stick around for a while, then pack up and leave again. I call them "The Bickersons", after an old radio show in which the husband and wife engaged in relentless verbal war. My Bickersons are raucous and unpleasant and I'm happy to see them leave my yard.

Remembering an incident with the jays that happened a couple of summers ago, I now realize that my train of thought regarding these birds went off the tracks somewhere along the way. That summer, Penny, our Golden Retriever, actually caught a blue jay in her mouth. There was a pair of jays, obviously male and female, hovering and swooping low to the ground along with their fledgling. Penny moved in and, amazingly, snapped up one of the adults in mid-flight. I got the bird away from her and put it on the other side of the fence, out of her reach, but the jay had been too badly injured and eventually died.

I gave Penny a round scolding for killing such a beautiful bird. Then, Dan chastised me for scolding Penny. "She's just being a dog," he said. I had to agree. I remembered the story, "It's in my nature," from the movie "The Crying Game."

Anyway, back to my theory about the jays only arriving in our yard later in the season. That fledgling was obviously just learning to fly. It had to have hatched in a nest very close by, as it wouldn't have been able to travel any great distance. Therefore, those blue jays were in my yard all along. I don't know how I missed those flashes of blue, let alone the noise, but I must have.

Later this morning, when I walked to the back of my yard, I saw what my blue jay was looking at. My neighbor's lilacs are just about to burst into full bloom. It is surprising how just a few days of warm weather brings on the flowers. My own lilac bush is a bit behind, because it is shaded more.

Now that the weather is nicer, I leave my patio door open so the dogs can come and go as they please when I am home. I don't close the screen door because the dogs will go right through the screen. Therefore, Gracie has been bringing in a ton of "finds" from outdoors. Empty flower pots, pots full of damp soil, the water sprinkler, hose guides, rocks, and oh so many branches. When I told my daughter about this, she replied that it was natural for Gracie to bring things in since she is a retriever. Basically, Kristen was telling me, "It's in her nature." Actually, I told my daughter, Gracie is a German Short-Haired Pointer. A discussion ensued about whether or not pointers are also retrievers. I deferred to my husband, a long-time hunter, who says that yes, pointers are also retrievers.

I have also discovered, through researching the breed, that German Short-Hairs are escape artists, able to wriggle themselves out of tight situations. No matter how many times I put Gracie in the dog run, and how many ways I try to block the gate, she always manages to get out. Now she is called "Great Escape Gracie."

Today, the mailman came about 2:00. Knowing that Gracie has a penchant for eating mail, I ran to retrieve it (now who's the retriever?), but I was too late. Gracie grabbed two envelopes and dashed out the patio door. I had to chase her all over the yard before I got my letters back. Raucous blue jays. Bird-hunting dogs. Naughty puppies. I guess it's just "in their nature."
Posted by Julie at 1:25 PM