In Flanders fields the poppies blow
Between the crosses, row on row,
That mark our place; and in the sky
The larks, still bravely singing, fly
Scarce heard amid the guns below.
**********
We are the dead. Short days ago
We lived, felt dawn, saw sunset glow.
Lived and were loved, and now we lie
In Flanders fields.
**********
Take up our quarrel with the foe:
To you from failing hands we throw
The torch; be yours to hold it high
If ye break with us who die
We shall not sleep, though poppies grow
In Flanders fields
(Major John McCrae, MD)
**********
Major McCrae, a member of the Canadian Expeditionary Forces in World War I, wrote this now famous poem in May, 1915, after the Second Battle of Ypres (Belgium). Although I have known about this poem since I was a school girl, it now holds much more significance for me.
After my second cousin Shirl from Golspie, Scotland, "discovered" us members of the North Dakota branch of her Clan Munro, she invited us to read all about the family on the Ancestry.com website. There, I learned that one of my Scottish great-uncles was gassed at Ypres and taken prisoner, while another was wounded twice at Ypres but lived to fight heroically in many more battles.
Two other great-uncles fought in The Great War, meaning my Great-Grandmother Hughina had four souls to worry about and pray for.
Since thankfully I have no friends or family members who have fallen since - be it in World War II, the Korean War, The Vietnam War, the Gulf War, or the War in Iraq - I would like to take today, Memorial Day, to celebrate these men who fought against a terrifying enemy, the dreaded "Hun" who threatened to overtake all of Europe and possibly America.
I don't know if many Americans realize how horrid WW I was, as our country entered into the fray so late. Trench warfare was cold, muddy, smelly, bloody, gruesome, terrifying and shell-shocking. In short, it was HELL.
It is said that England lost a whole generation of young men as "cannon fodder" to the war, and I am sure it can be said of Scotland as well. When I first read the stories of my Scottish great-uncles, I bawled my eyes out to think that these young men whom I never had the privilege of knowing had fought and died for future generations, including me, their American relative who was born so long after they died.
**********
Sgt. Archibald Munro
Canadian Army 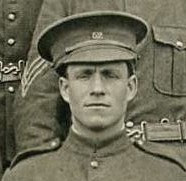 Three of the Munro lads from Golspie immigrated to Canada in their young manhood. One of them was my grandfather, Duncan, who had joined the Canadian Rifles and was preparing to go to war when the Armistice was signed. Another, Donald, had to have been Hughina's "Fourth Son" engaged in battle, although all records for Donald have since been lost.

The third was Archie, already married and a father. Looking through his records, Shirl and I have concluded that Archie lied about his age - downward - to get into the army as part of the British Overseas Expeditionary Force. He was among the first 30,000 Canadian troops to enter the war.

Archie's service was cut short. He was caught in the first attack in which Germans used gas, for which the Allies were unprepared. He was left in No Man's Land at Ypres for 24 hours, then was captured by the Germans. He spent 18 months as a prisoner of war. At the POW camp, the "Spanish" flu was killing prisoners by the hundreds. Archie, who had gone into a coma, was thrown out with the dead. Fortunately, a Russian doctor checked the pile of corpses and found Archie still alive and persuaded a German doctor to send him to a hospital.

Later Archie was sent to recuperate in Switzerland, where hospital care and the clean mountain air helped improve his health. He was later sent to England in a prisoner exchange. Before the war was out, he was sent back to Canada, where the government sent him on tours to lecture about his experiences among the terrifying Huns.

Archie and his family later moved to Chicago. He succumbed to his injuries and died in 1921. 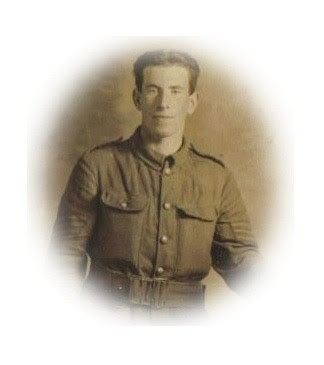 Before the war, William Munro was an athlete - a noted footballer (soccer player) - and a newspaper reporter. He had "a fine manly bearing", and was "a most estimable young man." For a time, his letters from the front were, said a newspaper for which he had worked, "an outstanding feature of the paper."
After a furlough home, waiting to board a train back to the front, he was quoted as saying, "Get your flags ready for victory, and don't forget a good Union Jack for the centre!"
William was, newspaper articles recounted, "an ideal type of Highland soldier and a great favourite with his comrades." He was "a valuable non-commissioned officer and a soldier to his fingertips." His men "loved him and would follow him to the last."
"The last" came on Nov. 13, 1916. He was 25 years old. All of Golspie mourned.
**********
Regimental Sergeant Major
John Alexander (Jack) Munro
King's Own Scottish Borderers 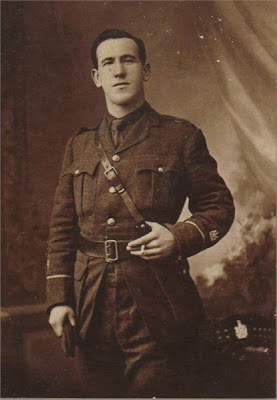 Like his brother, John Alexander (Jack) Munro, was an athlete, a frequent winner in Scottish Highland games. He was "a fine strapping fellow, courtly in manner, held in highest esteem in Golspie."

Jack went to France in 1914, at the beginning of the war, and fought through all of the outstanding engagements and battles of the war: The Retreat from Mons, Ypres, St. Julien, the Battle of the Marne, The Somme Offensive. He was swiftly promoted through the ranks, and achieved the rank of regimental sergeant major, a remarkable feat for a man so young. He went through a long spell of trench warfare.

During one engagement, in the face of fierce shelling and machine gun fire, he carried one of his officers off the field. He was well known for continually denying himself to help his wounded comrades, even to the length of giving up his own field dressing.

Jack was wounded four times, the last most severely. After recuperating, he was posted as an instructor and could have remained in that position, but "his whole desire was to be in the firing line along with his comrades."

On April 12, 1917, he was killed by a shell while again helping a comrade back to safety. He was only 23 years old. His death came just five months after his mother was devastated by the news of William's death.

Jack's obituary reported that "the community of Golspie could hardly accept the sad tidings. They simply refused to believe such a gallant life had at last been tragically ended."

He was posthumously awarded the Military Cross for "conspicuous bravery on the field of battle."

Today, Memorial Day, I am so proud to honor and name among my relatives these stalwart, steadfast, brave men who made, as the cliche says, "the ultimate sacrifice". I am sure that they, like the soliders in "Braveheart", "fought like warrior poets, and won [our] freedom."

They are my heroes.

It is always humbling and sad to read of the young men who died so young fighting for the freedom we enjoy now. In UK our Remembrance Day is November 11th the anniversary of the day when WW1 ended, I wrote a piece last year on my blog about family members who also gave their lives. The least we can do is remeber who they were and what they did.