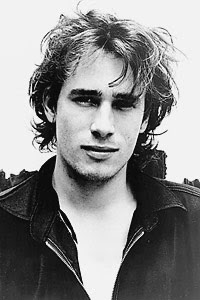 Today is the 10th anniversary of the death of Jeff Buckley. I wrote a post about my admiration for Jeff's music in January, but since no one was reading my blog then, I thought I would reprint it today:

**********
Tonight has been a Jeff Buckley night. I have been listening to his CD, "Grace", and skimming through Merri Cyr's book, "Jeff Buckley: A Wished-For Song."


My fascination with Jeff Buckley began with a haunting song I heard on "Crossing Jordan." I HAD to find that song. First I learned its name, "Hallelujah", then I began to search for the singer. Leonard Cohen wrote it but oh my Lord, no. Not his version. Rufus Wainwright recorded a version. Better than Cohen's, but not quite right. I even listened to Gavin DeGraw's feeble imitation. Finally, I discovered that the haunting, ethereal voice belonged to Jeff Buckley. I later read that even though Cohen wrote the song, it is considered to be Jeff Buckley's song.


I bought "Grace" and listened to it over and over. I ordered Cyr's book and became entranced with the man as well as the musician. I checked out Jeff's websites and read "Dream Brother", Jeff's and his father's biography.


I learned that Jeff was the son of 60s folk singer Tim Buckley. Tim wanted nothing to do with Jeff and his mother after his birth. This rejection, of course, affected Jeff profoundly. However, it was his father's death at age 28 that ironically helped Jeff begin his career. At Tim Buckley's tribute, Jeff - virtually unknown - went onstage and played. Who, everyone asked, was that young man with such talent? He quickly drew raves for his otherworldly, (some say) eight-octave voice. "Grace" and touring brought him a measure of fame. On May 29, 1997, the eve of beginning recording sessions for his next album, he drowned in the Wolf River in Memphis, TN. He was only 30.


Jeff left a world of mourners - fellow musicians, friends and fans. His circle of friends was worldwide. Not only was he a tremendously gifted musician, but he was also a very special man: "Such a true artist, such a generous spirit", "So likable, so innocent", "On this earth but not of this earth." "Jeff was from the heart and soul."

Spiritual, introspective, searching, endearing - that was Jeff Buckley. He profoundly affected the people who met him, having "the ability to make every person feel, even if it was for one second, that they were the most important person in the universe".


Jeff was only semi-famous when he died. I didn't know of him during his lifetime. Why then, was Jeff Buckley so important to the world of music? Because he was an inspiration to the best musicians of our time: Jeff Beck, Robert Plant, Patti Smith, R.E.M., Bono, Elvis Costello, Eddie Vedder of Pearl Jam. Bono called him "A pure drop in an ocean of noise."


He had a tremendous effect on the music industry. He was called the future of rock and roll and his music "a yardstick by which people compare other music." "Every (singer) wants to be like Jeff," said one friend, "but no one ever will."


So today, I listen to Jeff to not only hear my beloved "Hallelujah", but also to marvel at the pure choirboy voice on "Corpus Christi Carol". (Who else could take a medieval chant and put it on a rock album?)


I listen to Jeff to visualize scenes like this: "I lost myself on a cool damp night/I gave myself in that misty light/Was hypnotized by a strange delight/Under a lilac tree" ("Lilac Wine") or "Looking out the door I see the rain fall/Upon the funeral mourners/Parading in a wake of sad relations/As their shoes fill up with water". ("Lover, You Should Have Come Over")


Jeff had a premonition of his early death, no doubt about it. In "Eternal Life" he sings, "Eternal life is now on my trail. Got my red glitter coffin now, need just one last nail". In "Grace," he sings, "There's the moon, asking me to stay, Long enough for the clouds to fly me away. Well, it's my time coming, I'm not afraid to die".


On that spring evening in 1997, Jeff, waiting restlessly for his band to arrive in town, waded into the Wolf River for a carefree swim. Four days later, his body washed up at the foot of Beale Street, Memphis' famed "musicians' street." I suppose that you could say of many a man, "He died too soon, too young." But I believe that with Jeff's death the world was robbed of a musician like no other.


"His death was so hard to believe because he was so godlike in his talents. You couldn't believe his life could be snuffed out. That he was mortal. His talent was so immortal. He was so vulnerable with a lot of baggage and problems to work out and at the same time he had this ascendance, talent beyond even him." (George Stein )

I wrote recently about striving for three qualities in my life: serenity, grace, and class. Jeff's album was entitled "Grace", and recently I ran across a quote from Jeff about grace:


"Grace is what matters. In anything. Especially life, especially growth, tragedy, pain, love, death. About people, that's what matters. That's a quality I admire very greatly . . . It sort of keeps you alive and keeps you open for more understanding."

I will have to listen to him!

You're right - I wasn't reading your blog in January, but I did read this post in your archives when I found your blog recently! I don't think I know his music, but I really like how you write about him. It's good to mark and honour the people who have inspired us.

I'm so glad you posted this again Julie. I had not heard of Jeff Buckley. So sad that such a talent left us so early.

Hi Julie .... Hallelujah and Corpus Christi Carol are my two favourites I have them on my playlist which gets played daily. Recently a tv show brought together a group of people who are on struggle street because of drug or alcohol addiction or struggling with other of lifes challenges .... anyway the idea of the show was to form a choir which in turn would release a cd and perform a concert. One of their songs was Hallelujah it had even more of an emotional meaning hearing this choir sing it *!*