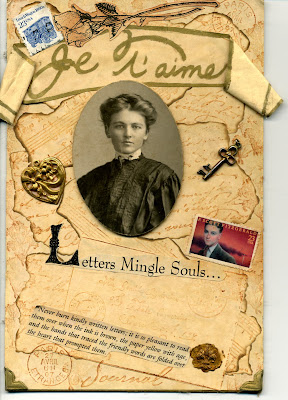 Look what I found between a cabinet and the wall in my living room! (Cleaning house does have some rewards!) I made this collage some years ago. If you think it looks familiar, you probably saw something very similar in "Somerset Studios."
At that time, I stuck pretty close to duplicating the examples in the magazines. I know people pooh-pooh that today, but I was a beginner then. I went so far as to order the exact stamps used in the original. I found my "Instant Ancestor" at a flea market. That's an actual sealing wax seal in the lower right hand corner, and I burned the edges of the papers. I did add my own background stamp and embellishments.
I had no qualms about putting this on the scanner today, as the banner rolls have been flattened for quite some time. I'm amazed at how much the brown ink has faded in places. I actually convinced the owner of a local stamp shop to order the required stamps and display my collage in the store for a time.
Today, I would not copy a magazine sample so closely, but I had huge fun making the collage and telling people that my work was on display in a store.
I am also passionate about the art of letter writing. Two of my favorite books are exchanges of letters between two people: "Stillmeadow and Sugarbridge" by Gladys Taber and Barbara Webster and "84 Charing Cross Road" by Helene Hanff.
For a while, my niece Lisa and I were really good about sending each other long, handwritten letters. In order to write even better missives, I bought "The Pleasures of Staying in Touch: Writing Memorable Letters" by Victoria magazine. Each of us bought a bunch of seals and sticks of colored sealing wax. When Lisa tried wax chips, I did too. We tried special inks and pens. We added little ribbons under our seals. I also once sent Lisa a very swanky writing set with inks and nibs.
There is just something about opening a letter with swirly writing on the front and a seal on the back. For one thing, it tells you the writer really took the care and time to compose your letter.
Lisa and I really have fallen out of the letter-writing practice in recent years, especially since it is so quick and easy to email each other. I actually don't mind corresponding via computer, but it is still fun to get a letter in the mail. And besides, you can't attach stickers and seals to an email, or tuck little surprises inside it.
Posted by Julie at 4:18 PM

Hello Julie, I have enjoyed your blog page very much today and will be coming back for more of your posts that is for sure.

We are here in Australia feeling the cold and taking a moment to go around the blogger world looking at some new friends and some that I have know for awhile.

You post here is lovely your art is beutiful and yes I too miss getting letters in the post. I must send some and see if I get a return!

I look forward to seeing you again.
Lee-ann

Hi there, I followed you over here from my sister's blog (Kelli - There is no place like home)
I wanted to say I like your collage and you're right, letter writing is really important. I haven't done that in a long time, and need too. :)

there is always going to be 'discussion' as to whether it is right or wrong to copy. I believe that if you just do it for fun and don't sell it - to learn things as you did, then it is ok - you can never duplicate things 100% anyhow.. many will come out of the closet screaming at my opinion, I am sure.

I have looked everywhere for the CD Celtic Gleam but can't find it. Haven't heard any of Loreena Mckennit music but have heard of her

I agree that a handwritten letter is a lost art and frankly I do miss it. I can remember getting letters in the mail with such anticipation to carefully open it and read the words written in that persons hand. And likewise sit and write a letter to someone. The advent of the computer and email has definitely made it easier and FASTER to correspond - yet it lacks the personal touch. I prefer writing with a fountain pen and I do have my stamp/sealing wax for the envelope. Just as I am starting to journal in long hand, perhaps I should write a letter to someone too.
As for copying work, to do that in the beginning is to learn technique - soon experimenting, colors, textures and style emerge as ones own.
XOXO

I wrote a comment to you last night to thank you for your words of condolence on the death of my Meggie. It seems the comment didn't get through.

So...once again....thank you. I am still hurting, still unable to accept, and still missing her.

Julie, I have a feeling that you write lovely letters, because your posts are so well written. Writing is becoming a lost art...I can feel myself forgetting how to write...the actual penmanship skills evaporating! I thought journaling in long hand would slow down this "evaporation"...maybe it has...but now I mostly "journal" on my blog!

By the way, I hope you ladies have heard that Victoria is being relaunched this Christmas! You can subscribe by going to www.victoriamag.com!!