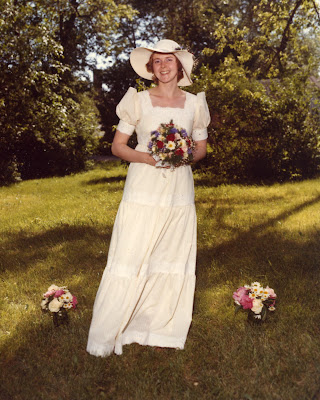 Determined to be a June bride, I made it - barely!
Welcome to Langdon, North Dakota's, first hippie wedding! It wasn't really, but that's what people in Langdon called it. It was the first outdoor wedding in the town's collective memory, which must have translated into "hippie" for them! (Langdon was very conservative at the time and probably still is.)

Thirty-three years and about two hours ago, on a warm, mellow late summer afternoon, my fiance, Dan, and I walked together across a city park toward a crowd of our friends and families to say vows we had written ourselves. The day had started with much less promise.

We awoke that morning to wind and angry black clouds threatening rain. I and my friends spent most of the day cleaning the Jaycee Arena, where the reception was to be held - and the wedding, if indeed it did rain. The previous party that had rented the hall had left it in bad shape, with muddy floors and a mess throughout. We only had time to clean, not decorate it. Tired and dirty, I was almost crying by late afternoon.

But everything did come together for a beautiful ceremony that was in keeping with our plans for a simple wedding. My dress was simplicity itself - handmade at a cost of under $100.00. I was daring to go with the hat, because brides those days seldom wore hats. On my hat and in my bouquet I carried simple garden flowers - roses, daisies and bachelor's buttons (some pink carnations, too, I think.) Our friends sang and played guitar on songs including "Bridge Over Troubled Water" and "The Wedding Song" by Peter, Paul and Mary.

As a bride to be, I was anything but "Bridezilla." In fact, I was the opposite. I refused to have a bridal registry anywhere. To me, it seemed like "Gimme, gimme." I only ordered flowers for myself, Dan and our attendants. That upset some of the ladies so much that they picked flowers from their gardens to put in vases, as shown in the photo above.

Since Langdon is such a small town, and since Dan was known and loved by everyone as "Doc Fred" in his job as a physician's assistant at the clinic and the hospital, we invited everyone, and a lot of people showed up! For the reception, we didn't want to feed people justs dinner mints and nuts, so we had our friends at the local Greek American restaurant make up huge roasters of comfort food, and the ladies who worked at the clinic served it. The two doctors that Dan worked for footed the bill for the booze. The docs used to have champagne parties after hours at the clinic, and this party was no exception - the champagne flowed!

We had one small glitch later on - the band hired by Dan's little brother Scott failed to show up, but we just moved the whole party to The Eagles Club, much to the chagrin of my brother and sister, who were only teenagers. Everyone had a great time, which was our intent and focus.

I just die now to think that I let Dan choose his own powder blue wedding suit and accessories (see Bridezilla note above.) Everyone said he looked like a Southern gentleman instead of a Norwegian NoDak.

I set up the pose below, in imitation of those old-fashioned photos in which the groom is seated and the bride STANDS beside him (what was that all about?), neither of them smiling. I later had the photo printed in black and white to further the effect. We unfortunately lost our wedding photos in a house fire in 1982, but Dan's mother graciously gave us her photos. And I do mean graciously, because I remember her huge gasp when the photographer gave her the bill for the large set of photos she had ordered! 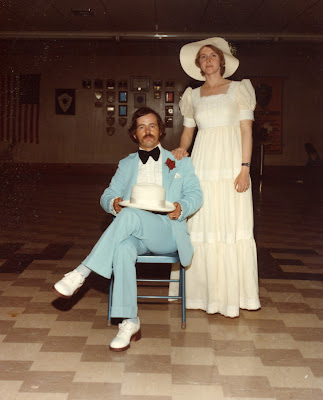 Oh, those white shoes - he's more dressed up than I am!
Much later that night, we hopped into our chrome yellow Volkswagen for the two-hour drive to Grand Forks. We had a plane to catch the next morning - to Athens, Greece! 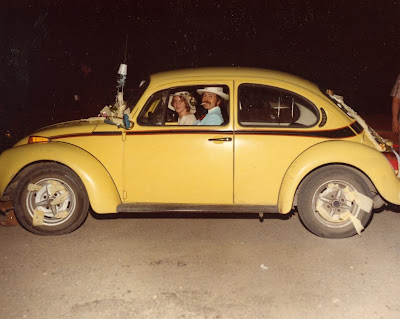 Here we are, Bonnie and Clyde, off and away in the V Dub.

Happy Anniversary. I didn't realize it was today. Wow you have your birthday and anniversary in the same month. I remember those days and out door weddings really were considered unusual..."What you not getting married in a church?"
:-)
xo

What a wonderful post! I love the pictures and your dress was beautiful. When I got married I walked into Macy's, straight to the sale rack and found the perfect dress for $50.00. It was exactly what I wanted.

Happy Anniversary to you and Dan.

Congratulations! You have lovely memories and photos of the day!
I really like your bouquet and hat....your dress is very like the one my sister had for her simple wedding in 1973. I think we had a lot going for us with the "hippie" weddings...friends pitching in and community support rather than huge amounts of $$$$ spent on a lavish production!

Oh how sweet. What wonderful memories for you. Congraulations!

wow, you got married just after your birthday! Happy anniversary - I love your dress and hat.. hope you had simply wonderfully romantic day - blessings always xo
ps - haven't forgotten the crystals - will get to it soon xo

Happy Anniversary!!! What a wonderful post, I enjoyed hearing about your day and seeing all the pictures. You were a beautiful bride, I love your hat and bouquet of garden flowers. I think outdoor wedding are wonderful, having had one myself! :0) It rained on our wedding day too. About 15 minutes before the ceremony it started up and a neighbor offered us his sheltered back porch until it stopped. They say it's good luck if it rains on your wedding day but I'm glad the the sun came out again soon!

Happy Anniversary to you and your hubby, Julie:-) I so enjoyed hearing about your day...weddings are so expensive these days, I swear they should all be the way you had it!! Your day turned out so wonderfully, it just goes to show one doesn't have to spend a fortune!! Loved all the pictures:-) xox

Belated Happy Anniversary to the two of you. Very much enjoyed seeing the pictures and hearing the story. Love Hugs and Blessings

Happy anniversary Bonnie and Clyde! I love your dress and hat! I am glad you got some wedding pictures from your mother in law.

Belated anniversary wishes Julie. What fabulous pictures, so reminiscent of my own. Hippy dippy must have been in the air back then but simple is good, in fact the best. Your community drew all around you contributing to the beginning of a very long and successful marriage of two hearts.