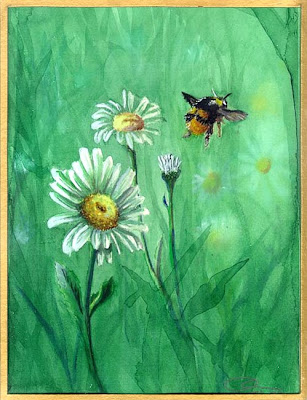 (Painting by Alana Harley)
I have always longed to have a front garden, and now I'm going to get one!

I used to be an avid gardener. I wrote a column called The Garden Gate for the Bismarck Tribune. I prepared the newsletter for the Bismarck-Mandan Garden Club, and I took the Master Gardener Class. I had a pretty nice perennial garden going in my back yard, but as our huge American Elm got even huger, the garden got shadier and shadier, and eventually everything died out. My lovely little herb garden is too shaded as well. Although I continued to grow a lot of annuals in containers, my dream of having a beautiful perennial garden evaporated.

Funny how some things come together. The north half of our front yard - where the sun shines all day long - had gone badly to weeds in the past couple of years, so this spring my husband rototilled it all up. Weeks later, he still has not planted the grass and the weeks are back with a vengeance.

Then, a certain home improvement store, which I won't name, but starts with Lowe's, finally gave us a refund on a badly-installed floor. (I'm still going to fight to have the labor costs refunded too.) However, it was in the form of store credit, not cash. Well, I certainly am not going to buy another floor at Lowe's, so what to do with the money?

I made Dan a proposition: "For Father's Day, let's use part of the money to get you a really nice, new gas grill for a change. And," I continued, "why not let me turn the front yard into a front garden? That way you'll only have to seed the boulevard." It didn't take him long to answer. Done deal!

While we were at the garden center I picked out 40 leaf-shaped stepping stones for laying out curving paths. It turns out that the front yard is bigger in reality than in my mind's eye, so I will go back tomorrow and pick up some of the stepping stones that have a Celtic look to their design. I also have a collection of decorative stepping stones from my pathetic shade garden that will now go up front. I already have an arbor with a seat that will go in one corner.

At least for now, I think I will be putting down plastic mulch to squelch the weeds. It's more important, I think, to get a lot of hardscaping done now. I will put in the perennials gradually, and I'll plant seeds this fall like bachelor's button that will sprout in the spring. And of course, I will fill in blank spaces with annual bedding plants.

I do have a picket fence and an arbor over the sidewalk, on which grows a monstrous William Baffin climbing rose. (The poor mailman should have a machete to whack at William when he delivers the mail.) William is in full bloom right now, and he is gorgeous. I also have other hardy Canadian shrub roses against the fence, and some lilies, so I won't have to start absolutely from scratch. In fact, a lady passing by once told me that my house looks like a fairy-tale cottage!

I have a birdbath and some large pots that I will put to good use in the front. And, I have a large collection of fairy statues, and a sign that says, "There are fairies at the bottom of the garden." So, as I am imagining this fairy garden, a light bulb went on in my head. Who loved fairies? Who loved gardening? Who gave herself a nom de plume made up of two flowers' names?

Yes, my garden will be in honor of Daisy Lupin. I will put a little plaque or marker to that effect somewhere. Even though I don't have a digital camera, I will try to post a few pictures now and then to show you the progress of Daisy's garden.
Posted by Julie at 8:46 PM

This was a very funny way you make me visualize your now garden and future garden, LOL, specially the part about the mailman and his machete, LOL
Thank you for my future and better said now wrinkles from laughing, LOL and more LOL
I am so glad you decide to bring your garden back in honor of Daisy, what I still can't get over is the fact about not having a digital camera, ???
I can't live without my camera, LOL

Hello, neighbor! Ahh, a front garden; they're the best. There were a couple in Chicago that I loved to drive by, picket fence, hollyhocks and all. I'm so happy for you. Don't work too hard and send pictures!

Hello Julie Marie:-) Carmen suggested I come visit you because she figured we would like each other...from reading some of your posts, I think she's right!! lol I think it's a wonderful idea to make your front garden in memory of Daisy...I miss her so much already and am still in shock over her death. I'm holding a Faerie Day Giveaway so make sure you come visit me and enter your name in my draw:-) xox

Hey, I am the artist who painted that painting. I was supprised when I did a search to find my work out there! lol Where are you from? Alana.