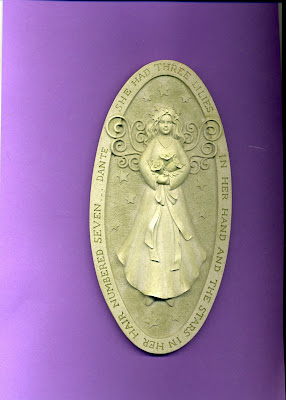 SHE HAD THREE LILIES IN HER HAND
AND THE STARS IN HER HAIR NUMBERED SEVEN.
Dante
*******
My friend Jude, whom I often mention, is a kindred spirit to me for many reasons, not the least of which is that we are both Cancers and we ALMOST share a birthday. Her birthday is the day after mine next week, so today we shared a birthday lunch at Kroll's Kitchen, a replica of an old 1940s diner. In addition to being nostalgic and serving great chocolate malts, Kroll's also features knoephle soup, a German staple around these parts. It and the other Kroll's Kitchens in town have cute TV commercials featuring ladies with thick German accents saying, "Sit down und eat!" We chose Kroll's because it is three minutes away from my new office, but I digress.

We generally don't gift each other, so when we saw that each of us had pretty gift bags in our hands, we said, "Now, we aren't going to make a habit of this!"

I got Jude a nice pink, capped pen and "J" note cards just like I had featured on my blog a few weeks ago. My sister and I happened to go back to TJ Maxx a week after I bought my stationery. Lo and behold - and I could have sworn there were no more left - there was a box of the "J" cards. What serendipity! Jude is a lady from the old school - she still writes notes and letters in longhand, bless her.

I also got Jude a card that is a reproduction of a Victorian folding fan. On the back I wrote, "It isn't a nu shu Secret Fan, but I hope you like it." This is in reference to the book "Snow Flower and the Secret Fan," which our book club read last month.

An important part of the book is the tradition of Chinese women sending each other messages on silk fans in nu shu, or secret women's writing. Jude had the inspiration to add some writing on the fan next June and send it back to me, and so on and so forth. I have heard of people doing this with Christmas cards, etc. I hope this starts a great new tradition. Leave it to a kindred spirit to think of something like that.

The plaque above is Judy's gift to me, just right for my new front garden. I have seen the Dante poem before, but I was thrilled to have it on a plaque so I can read it often.

She also gave me the card shown below. To know Jude is to know that even picking up a CAT card is an ordeal for her. She is, shall we say, very "uncomfortable" around cats. "They are too unpredictable," she says. However cats always seem to go straight for Jude, even in a crowded room. At our book club Christmas party, Jude leaped onto Kathy's lap when the resident cat decided to stand up and put her paws on Jude's - and ONLY Jude's - legs.

So, for Jude to get me this card is extra special. By the way, the inside of the card reads, "Have a happy birthday, if you must." Just like a cat! 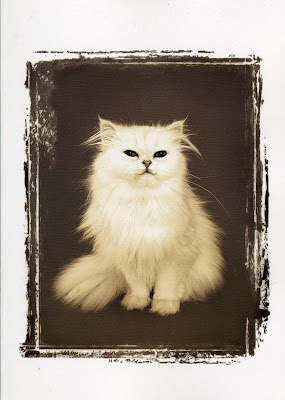 Tomorrow - a saga of angel food cakes and a special BD card my sister gave me!

How wonderful that you and Jude were able to have a birthday lunch together:-) Isn't it wonderful to have such a kindred spirit?!! Such lovely gifts you exchanged also...that plaque is gorgeous!! You were asking me about the chicken tornados...I actually buy them like that, I've never made my own! lol They're great because you grill them from frozen and I usually put a honey garlic bbq sauce on them as they're grilling. Hopefully you can find them at your grocery store!! xox

Your plaque is beautiful - what a lovely gift to receive. I enjoyed reading about your book group's Summer Solstice celebration - what a fun evening it must have been. The goody bags were a nice idea, especially the gossamer bags with soap leaves in. Gossamer is the perfect word to associate with Midsummer and fairies. We have grey skies and rain here, not very summery at all!

Sorry, I put my "happy birthday" wishes on your solstice post, so thought I'd just add them here again. Happy Birthday!