DESCENDANT OF A HEROINE? 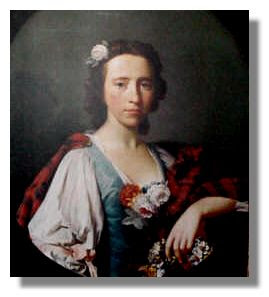 FLORA MacDONALD
**********
Barrie, one of my newly-discovered Scottish cousins, sent me "The Clinton Saga" written by his uncle, Eddie Clinton. In the saga, Eddie writes, "Granny's father [meaning MY Great-Grandmother Hughina Munro] was a MacDonald, a shepherd in Wester Sutherland. His family came from (the Isle of) Skye and, I believe, were direct descendants of Flora MacDonald of Bonnie Prince Charlie fame."

What a tantalizing tidbit! Could I, myself, be a direct descendant of Flora MacDonald?

Flora MacDonald (or Macdonald) is a Highland Heroine, having helped Charles Edward Stuart ("Bonnie Prince Charlie"), the young pretender to the Scottish throne, escape the clutches of the English.

Following the overwhelming defeat of his forces at the Battle of Culloden in April, 1746, Prince Charlie, with a bounty of 30,000 pounds on his head, was on the run for months, hiding out in the Western-most islands of Scotland. Since the outer islands were overrunning with Redcoats, it was determined that Charlie should make for the Isle of Skye in the Inner Hebrides. It fell to Flora to guide him. After some hesitation, she finally agreed to help the prince. Most sources say she was not a Jacobite (supporter of the Stuarts' claim to the throne), but, says one writer, "Flora would never have seen the prince betrayed though she sympathized not with the Jacobites."


Another theory is that Flora was handed the task because she was young, healthy, full of spirit and practical, and she could obtain passports using the ruse of visiting her mother on Skye. Whatever the case, she later told the English Duke of Cumberland ("The Butcher of Culloden") that it was "an act of simple humanity", and she would have done the same for him.

To further the ruse, Bonnie Prince Charlie was disguised as Flora's Irish maid, "Betty Burke." Although clothing was rounded up to fit his big frame, he made for a very funny woman, taking giant strides and having difficulty managing his skirts. His big clumsy boots nearly gave him away.

The journey was fraught with peril at every turn, but Flora successfully delivered Charlie to Skye, and he eventually went into exile in France.

When they parted, Charlie supposedly gave Flora a gold locket, and told her, "Madame, we shall meet yet at St. James." By that he meant that he still hoped to be king one day and welcome her to St. James' Palace in London. Flora never saw the prince again.

Bonnie Prince Charlie never returned to Scotland. He died in Rome in 1788. For her part in the escape, Flora was sent to prison, including a brief stay in The Tower of London. However, she became highly regarded as a heroine and was released in 1747.

The lovely Flora, who was described as having soft features, gentle manners and an elegant presence, later married. She and her husband immigrated to North Carolina in the Colonies, but later returned to the Isle of Skye, where she is buried.

Some say Flora and Bonnie Prince Charlie fell in love during their brief time together, but "simply knowing that she put her life on the line for the fleeing prince is romance enough for most." And it is enough for me as well.

Am I her descendant? This could be all poppycock. Supposedly I am related to Buffalo Bill Cody as well (but not directly, as he had no children). I may never know, unless my super-sleuthing second cousin, Shirl, tracks our family back that far (and she's the one who could do it.)

In the meantime, it is fun to think I may be descended from such a courageous, bold, beautiful lady, a Highland Heroine. 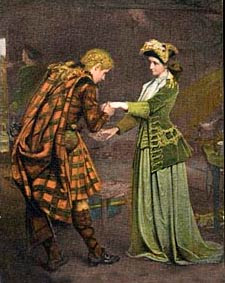 What an interesting story,how marvellous it would be if you could prove your descent from Flora. I've always been a Jacobite as long as I can remember, The Bonnie Prince came through my home town of Macclesfield on his march south. I've followed the Road to the Isles too many years ago and stayed in Arisaig. 'Speed Bonnie Boat' was one of the first songs my mother taught me as a child. Her maiden name was Allen which is a name connected with the MacDonald clan but I've so far made no Scottish connection at all. It's a romantic thought though:)