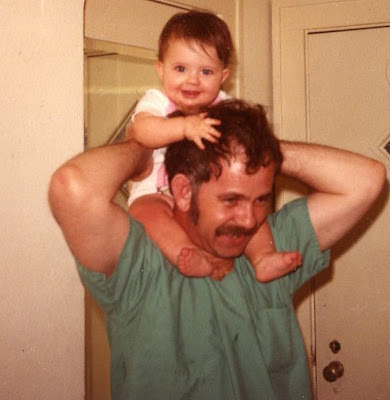 SILLY DADDY!
I don't really have the spirit to blog today, but this is timely, and besides, Lisaoceandreamer is reminding us to tell those close to us that we love them before it's too late.

So, Dan, even though you haven't seeded the lawn and the weeds are growing like...weeds, and even though you mowed down a third of my beautiful lavender irises this spring, I LOVE YOU, and HAPPY FATHER'S DAY, because you are a great dad!

Because I lost two pregnancies before Kristen, Dan had to wait a long time to be a dad, but he made up for lost time. The day Kristen was born, he went out and bought her a frilly pink dress. The saleslady, who turned out to be our new neighbor when we moved into our house, told us later she had never seen a prouder dad than Dan.

Because at that time he was on the road from Monday morning until Thursday evening, their dad-daughter reunions were much anticipated. That's Dan giving Kristen a horsey ride not long after he got home and changed into his comfy scrubs.

When Dan wasn't on the road, he was the one who got up with her for night feedings when she was an infant. He and she would watch old war movies on TV and he would, he joked, tell her all about "tin futures in Bolivia." Whatever he did, it put her to sleep! Thanks, Dan, for that.

And thank you for giving me my Saturdays. Every Saturday afternoon he volunteered to take care of her so I could shop or go to a movie.

For years, Dan and his pal Al would take Kristen and Al's three girls for a dads and daughters fishing trip. Dan even took Kristen turkey hunting when she was still very little and was proud of what a little trouper she was.

I may have told this story on my blog before; I've certainly told it to all my friends. When Kristen was in second grade, her teacher asked her if her mom could bake some treats for a class party. "Well, I'll have to ask my Dad," she replied, "Because my mom doesn't bake." So true. Dan was the baker. Every Christmas Eve Day Dan and Kristen would bake huge batches of sugar cookies and decorate them.

When Kristen was hit by a car when she was 10, I wasn't able to reach him right away. I'll never forget the look on his face as he came tearing into the emergency room and the relief that replaced it as I told him she would be okay. Later, when she was 22 and deathly ill in a DC hospital, I could hear the panic and worry in his voice when he called me. It was harder for him, having to stay in Bismarck, than it was for me being at the hospital, and he was so grateful for the tiny little bits of good news I was finally able to give him.

Kristen used to call Dan "Silly Daddy" a lot when she was little. At almost-25, she loves her old Dad but still thinks he's pretty silly sometimes, especially when he starts repeating himself. He has asked her umpteen times how her car is doing, and told her a gazillion times that he thinks her boyfriend is a "great guy and a really hard worker." She teases him that the only TV programs he watches are on "the war channel and the killing channel." (The History Channel and The Hunting Channel.) She also teases him about being a wanna-be cowboy, with his cowboy boots and hat. She knows he is a man of simple tastes, happy with the gift of a book or a flannel shirt. She knows he is extremely proud of her accomplishments and brags about her to all his friends and customers. And she knows she can count on him in good times and in bad times because she has his unconditional love. 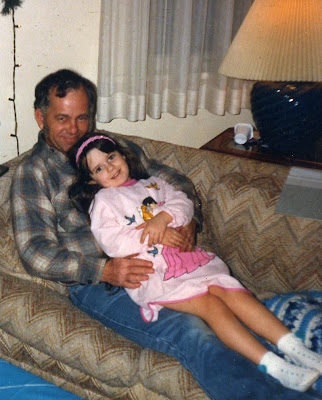 I LOVE MY DAD!
Dan had a really good example to follow in his dad, Earl, who died when Kristen was in grade school. Earl always helped Dan's mom with the dishes and cleaning. He showed Dan you can be a man and still do housework. He took Dan and his brothers hunting from an early age, teaching them sportsmanship and a love of nature. He was a wonderful grandfather to Kristen, his "little chicken," and like Dan, he was a good husband to his wife. And what better kind of Dad can you be than one who loves and cherishes your child's mother and treats her with kindness and respect?
**********
FIRST DAY OF COLLEGE FALL 2000 - I'LL MISS YOU SO MUCH! 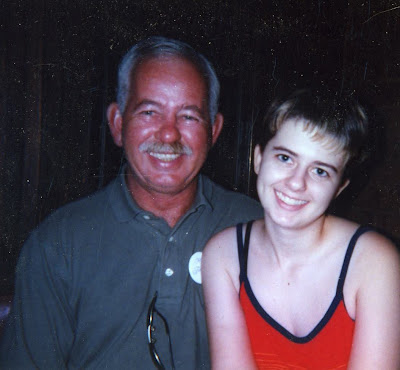 Lovely tale of a daughter and her daddy.

Such a touching post -- you're surrounded by lovely people. Thanks for sharing!

I am so glad Lisa encourages us to do this.