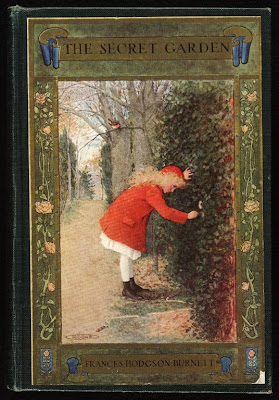 The very successful poetry fest initiated by Daisy Lupin, which features best-loved children's poems, got me to thinking about my favorite books as a child.

I was amazed to discover how many of the best-loved children's books I did not read until I was an adult: "A Wrinkle in Time," "The Secret Garden", "The Indian in the Cupboard," "The Velveteen Rabbit," "The Little Prince," "The Borrowers," "The Hobbit," "Charlotte's Web",
"The Giver," "Anne of Green Gables," "The Lion, the Witch and the Wardrobe," "Little Women", "Amelia Bedelia". Gosh, that's a lot of great children's literature to which I was never exposed.

When I was a student at UND and was tired of my study carrel in the library, I would sneak down to the fiction section and read "The Secret Garden" until I felt refreshed enough to study again. My college roommate and I read chapters of "The Borrowers" aloud to each other because it was a requirement for her kiddie lit class. Some books, like "The Velveteen Rabbit" and "Charlotte's Web", I read for the first time after I bought them for my daughter.

I always had my nose stuck in a book, so what, then, did I read as a child? Of course, a few books came readily to mind: the Bobbsey Twins series, the Nancy Drew series and the Little House series. I was so upset when "Little House on the Prairie" became a TV series. Hardscrabble, bearded pioneer Pa was nothing like Michael Landon. And the pretty actress who played Ma should have been drabbed down a lot.

The Little House books, now they were the real thing! I followed the Ingalls family from their "Little House in the Big Woods" in Wisconsin to "The Little House on the Prairie" in Minnesota to Indian country in Kansas and finally to De Smet, SD. Pa, always restless, always looking for the frontier, was forever uprooting the family. They lived "By The Shores of Silver Lake" and "On the Banks of Plum Creek" and in "The Little Town on the Prairie". They suffered through an extremely tough "The Long Winter" in South Dakota.

I loved reading about Pa's cleverness with making and building things. How Ma cherished her beloved Delaney dress, how Mary and Laura played with corn husk dolls and were delighted to receive oranges in their stockings at Christmas, how Jack the Brindle Bulldog trotted faithfully behind the covered wagon for hundreds if not thousands of miles in his lifetime.

I attended a one-room schoolhouse, and its "library" was just one small bookcase. But it contained "Pippi Longstocking", and "Heidi." Johanna Spyri could make a simple meal of bread and butter and goat's milk seem like heaven! The library contained a couple of really odd (to me) books: "Water Babies" and "White Patch," but it also contained a book I read over and over again, "Call it Courage," by Armstrong Sperry, about a young Polynesian boy who accidentally ends up stranded alone on an island and learns to fend for himself.

I adored "Caddie Woodlawn," by Carol Ryrie Brink, about an adventurous girl growing up as a tomboy in Wisconsin in the 1800s, and I so enjoyed Elizabeth Enright's "The Saturdays" and "Four Story Mistake," about the Melendy children who lived in a house with a cupola. (Love that word.)

Outside of school, I somehow found "The Yearling", by Marjorie Kinnan Rawlings, about a young Florida girl who tries to keep her pet deer even though it ruins her father's crops. I discovered "Where the Lilies Bloom", about orphans who struggle to make a living and hide the fact of their parents' death. I bawled over "Lassie Come Home", and I read "Lad" and every other dog book I could find by Albert Payson Terhune.

From my grandma's bookcase, there were the charming older books like "The Five Little Peppers and How They Grew" and "Mrs. Wiggs of the Cabbage Patch." I also discovered the Ramona books, by Beverly Cleary, whose books for teenagers became my favorites later.

My book club friends who grew up in Minnesota would surely add the Betsy-Tacy books, but sadly, I was never introduced to them. Must be a Minnesota-Dakota thing.

The more I thought about my favorite childhood books, the more they seemed to rise up out of the mists of my mind. Take, for example, "Blue Willow," by Doris Gales, about Janey Larkin, the daughter of itinerant farm workers who only wants to live in a place like the scene from her family's one valuable possession, a Blue Willow plate. I haven't thought of that book in years!

I'm sure if I thought about it some more, I could unearth some other jewels from my memory. Please share your favorite childhood books with me - I might be reminded of a few of mine!
Posted by Julie at 4:42 PM

I enjoyed reading about your favourite childhood books, Simmy from Echoes of A Dream did a similar post recently and I wrote quite a bit on her comments. It's in my mind to do something similar at some stage. It was interesting that you didn't read many well known stories until you were an adult - the same is true of me. I did read The Bobbsey Twins though even though they weren't available in England then (mid 1950s). I had a friend who had lived in Canada and I borrowed all hers and loved them. The same with Nancy Drew and The Hardy Boys. My favourite authors were Enid Blyton, Elinor Brent-Dyer and Capt W.E.Johns plus pretty much anyone who wrote books about boarding schools. As an only child I spent a lot of my time reading.

I can't believe how much we think alike! I too was just flabbergasted when Michael Landon played Pa with out a beard!It was a good TV series but really had very little to do with the real Little House!
I too read and still read children's literature now that I am (almost?) grown. I posivtively loved "Wrinkle in Time" which I read for my Children's Literature college class. (After that, I read everything Madeline Lengle wrote...including her autobiograpical writings...)

I enjoyed reading about your favorite childhood books because we share so many of the same: Bobbsey Twins (great fondness there), Secret Garden, Nancy Drew, Caddie Woodlawn, Five Little Peppers, only the Little House in the Big Woods (loved the bears!)Lad, Boxcar Children. Did you read any of the Beany Malone series by Lenora Mattingly Weber, or am I the only one? I was enamoured w/the idea of a brick wall around a garden in The Secret Garden.
Your website is lovely. . .thanks for the memories!