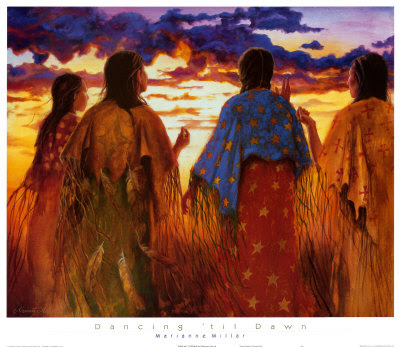 I found the illustrated quote shown above a while ago and have been saving it in "My Pictures" until I found a use for it. I think I found the perfect quote/poem to go with it, thanks to Gemma, who published it in her blog a few days ago. (http://www.gemmashouse.blogspot.com/):

I live in the heart of plains Indian country. Drive a ways south of Bismarck-Mandan, and you'll see a sign that says "Welcome to the Great Sioux Nation." I get a thrill every time I see that sign even though there is nothing to see but more sagebrush. Most people probably don't even see the sign, intent as they are on getting to Prairie Knights, the Native American casino.

Most Americans are familiar with the Sioux - or Lakota - Indians. (Lakota, their name for themselves, means friend; Sioux means enemy. ) Their introduction probably came from the Kevin Costner film, "Dances With Wolves." While DWW played in Bismarck, the theatre was always packed with Native Americans (a rare sight) and they seemed to very much approve of the movie. The movie was filmed in South Dakota. As we North Dakotan have to remind everyone, "Dakota" country is an advertising image. There are TWO Dakotas.

The Sioux were nomads, but we also had Mandan Indians living close by. The Mandans were an agricultural-based people, living in stationary communities along the Missouri River bottoms. Many villages were swept under water when the Garrison Dam was built. Today, the Mandans are joined with the Hidatsas and the Arikaras into the Three Affiliated Tribes. We also have the Turtle Mountain Band of Chippewa in the state.

Living in Bismarck, I have learned some of the native culture - or what passes for it. I have attended powwows at United Tribes Technical College and been mesmerized by the drums, the dancing and the colorful costumes. I've attended Native American art shows. I've purchased dream catchers. I've tasted Indian tacos (made with Indian fry bread and taco fixings).

I've read "Grass Dancer" by Susan Power, and studied the Ghost Dance which led to the massacre at Wounded Knee. When I walk down Fifth Street in Bismarck I sometimes think, "Sitting Bull walked down this.actual.street." I've burned cleansing sage gathered from prairie. I've learned bits and pieces of Native spirituality: About Wakan Tanka - The Great Spirit, the Medicine Wheel and the Four Directions, Buffalo White Woman.

I've seen the rare white buffalo at Jamestown, ND, long anticipated and very revered by the Native Americans. I've visited The Crazy Horse Monument in South Dakota (and I don't like his big-nosed face!). Fort Abraham Lincoln - George Armstrong Custer's last post - is closest, just south of Mandan and across the river from Bismarck. From there, Custer and the Seventh Cavalry left for Montana and the ill-fated Battle of the Little Bighorn (they died on my birthday!). At the same location, but in an earlier time, the Mandans had a village of earth lodges.

But for one who lives so close to the source, my knowledge of Native Americans is pitiful. At this stage of my life, as I seek wisdom, explore my oneness with the earth and try to find my place on the planet, I am eager to learn more of Native American spirituality.

Several people who commented on Gemma's post wrote words to the effect that Native Americans "got it" long before the rest of us, and hopes to the effect that "WE get it before it is too late." The respect these aboriginal American held for the environment was natural and abiding. (Yes, Native Americans are our aborigines, which is merely a term for indigenous people. American Indians referred to themselves as "The People", because, in the beginning, there were no other people.

We would all do well to follow the Native American Ten Commandments, which I ran across recently (author unknown):

1. Treat the earth and all that dwell thereon with respect.

3. Work together for the benefit of all mankind.

4. Give assistance and kindness whenever needed.

5. Look after the well being of mind and body.

6. Remain close to the Great Spirit.

8. Dedicate a share of your efforts to the greater good.

9. Be truthful and honest at all times.

10. Take full responsibility for your actions.

I just obtained a copy of "The Journey of Crazy Horse," by Joseph M. Marshall III, and plan to read it soon. I hope that reading this book about the famed visionary and brave warrior is just the first step I'll take in learning about Native American religion, culture and wisdom.

I have no wish to be a Native American "wanna be" or all of a sudden turn into a shaman who smokes a pipe in a sweat lodge or has vision quests and practices the Sun Dance. I mean no disrespect to Native Americans. I just want to "get it" myself before it is too late, and I want to feel a oneness with "The People" who share our web - our circle - of life.

we could all learn from our indigenous people. Our Aboriginal people - (who were known by that name when I was a child) are wise beyond belief. They know this land, its weather and its way - this wisdom has been ignored for many years and as we go into 'climate change' I believe we need to look at the knowledge and embrace it with both arms..
I also believe that ancient people such as the Druids had knowledge that was poo-pooed by the intellectuals and hence was lost..
we all need to go back to our roots before it is too late.
White Buffalo woman is one who I call in each time I create my sacred space.... I will share this invocation on my croning blog soon.
yes, things are connected - I have a wonderful piece that I want to blog about soon..

gee, Julie - I could go on and on but I should stop here before my comment becomes a blog of its own. great post !!!!
Blessed B xoxo

Daisy would have adored this post! It is her favorite subject!
Thank you!

I have been interested in Native American culture for many years now, I first started to learn a little from my Canadian cousin when I visited in the 1990s and that prompted me to read more about their way of thinking. It resounded so much with the way I see things too. Like you I am not a 'wannabee' but I have tremendous respect for their culture and their spiritual beliefs which hold great wisdom. There is much common ground with the old Celtic beliefs too and my path is my own version of these two. I wish I had known more of what Daisy Lupin had to say about this - I shall miss her posts a great deal. I will happily be your link to England in her absence. I only wish I had a tenth of her wisdom and knowledge.