WHAT IF EVERYONE CARED? 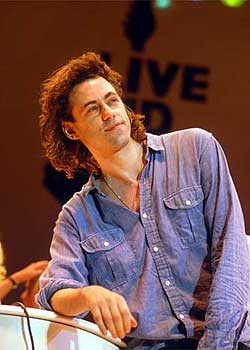 SIR BOB GELDOF
KNIGHT COMMANDER OF THE
ORDER OF THE BRITISH EMPIRE
**********
"Never doubt that a small group of committed people can change the world. Indeed, it is the only thing that ever has." (Margaret Mead)
**********
Mead's comment is shown at the end of the Nickelback video, "If Everyone Cared." The video showcases single people who have changed the world: Bob Geldof ("Live Aid"), fighter against world hunger; Nelson Mandela, fighter against Apartheid; a single committee, organizers of Amnesty International; Betty Williams, Nobel Peace Prize winner and organizer of the peace marches in Northern Ireland.
**********
"If everyone cared, and nobody cried,
If everyone loved, and nobody lied
If everyone shared and swallowed their pride
Then we'd see the day when nobody died"
**********
But what if everyone started smaller than that? What if this week we all committed ourselves to showing loving gestures at home, to zipping the lip against saying hurtful things? What if we swallowed our pride and turned the other cheek at work or in the marketplace? What if we shared something small with someone?
What if we stopped lying? (Except for the little white lies that are intended to PREVENT hurt.) What if we not only stopped lying? What if we told the truth, the whole truth and nothing but the truth, for just once? What if we stopped lying to ourselves? What if we committed a Random Act of Kindness? Just one?
If we set a limit of just one week, could we do it? I've been thinking about this and have been practicing it already for a few days now. Can I make it seven days? Can you?
So far, I have told the truth to myself about something about me (that I'd rather keep private for now). I have shared something small and inexpensive - my time - with a friend in the hospital. I have turned the other cheek when the lady at Job Service bawled me out (for having a four-page resume. It's been 11 years since I looked for a job. Who knew?)
Maybe I'm no Bob Geldof. Maybe we can't change the world at large, but maybe we can change our small world. Who is up to the challenge?
View Nickelback video at: http://music.aol.com/video/if-everyone-cared/nickelback/1798454
Posted by Julie at 12:49 PM

If everyone cared then this world would be a better place to live in...