WHATEVER YOU CALL IT - IT HURTS 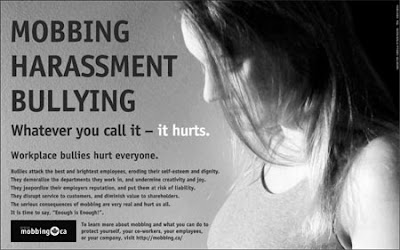 The small print reads:
"Bullies attack the best and brightest employees, eroding their self-esteem and dignity. They demoralize the departments they work in, and undermine creativity and joy. They jeopardize their employer's reputation and put them at risk of liability. They disrupt service to customers and diminish the value to shareholders. The serious consequences of mobbing are very real and hurt us all. It's time to say ENOUGH IS ENOUGH."
I learned two things Friday. One is that I will be awarded unemployment compensation, as it was determined there was no misconduct involved when I lost my job. Well DUH! But I had to pretty much prove it to the the u.c. people before I won out. I also learned that North Dakota is a "fire at will" state, meaning if you do not have a contract, your employer can fire you for good cause, bad cause, or NO CAUSE AT ALL. As one source states, your employer can fire you if you wear green and green gives her a headache.

I know that if my wonderful former supervisor Marilyn hadn't recently retired I would still be at my job, moving right along at 9 years plus. Marilyn was my boss for 8 years and 9 months of that time. But there was a small part of me that knew that once Marilyn was gone I was a goner too. Once I learned our department was being transferred to our sister office, I was afraid - very afraid - because I had already heard stories about the person who would eventually become my supervisor. Her reputation had preceded her.

I am a victim of a toxic work environment and workplace bullying, and right now I'm checking out what legal recourse I have. If I lived in England, Canada or Australia I'd have an excellent chance at recourse, because they have better laws against this no-longer-tolerated problem.

Please don't call me disgruntled. As Steve Carell in "The Office" would say, I am "gruntled, very gruntled." Even considering that have I lost my livelihood and my health insurance, and will likely be discriminated against in the job market because I am 57 years old, I am happy.

I'm happy to be away from a boss who holds different people to different standards, who berated and belittled my department and my supervisor on a daily basis. I no longer have to face temper tantrums and childish behavior. No longer will my questions be called stupid. I'm happy that my former supervisor is no longer there to have her 24 years of experience and vast knowledge of the field denigrated at every turn and her opinions undermined and dismissed. (Her husband reports that she "hasn't quit smiling" since she left.)

I'm happy to not be around a boss who is a hypercritical, nitpicking, moody, grouchy, volatile and mercurial control freak. A boss who calls her style of management authoritative, when it is in fact just plain mean. A boss who makes Meryl Streep in "The Devil Wears Prada" look good.

I do worry about my friends who are still being victimized. I worry about my friend with the stress-related intestinal ulcers, my friend who goes home and cries at night, my friend who's been there 30 years and has been passed over for many promotions. Oh, yes, I was not the only victim, not by a long shot. Because I was a highly productive worker who made few mistakes, I never had to face what some of my co-workers did - being severely chastised (in front of their peers) and even demoted for their mistakes while others making the same mistakes got off scot free. I never had my personality torn apart, analyzed and found wanting. Unlike another employee, at least the supervisor never told me "I have nothing good to say about you."

In fact, sometimes I could sit back and relax for a while because someone else was in the hot seat. Someone else was the scapegoat of the week. There is just one thing I wish I had done differently at work, and that is to stand up for another fellow employee and friend who was incessantly being picked on. Instead, I sat there and kept my mouth shut like a coward, worried about my own job. I hope I'm never that cowardly again.

Mother of God, what a horror show. Unfortunately, they apparently are everywhere. My department is pretty decent but another in close proximity to me is a problem. My sister, who is no wimp, finally left her toxic workplace job, then returned to a better job in another area next to them. Returning but not being in their control was sweet.

What a blessing that you are getting unemployment. With the state having an acceptance of "fire at will", they must be fully aware of what people have to deal with and by tolerating it, they encourage it. It makes one wonder about state level jobs. I wish you luck on pursuing a legal recourse.