THE HEART OF "GREY'S ANATOMY" 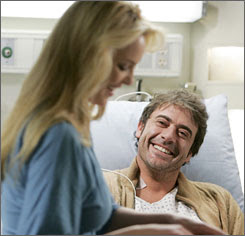 I can't believe I forgot to post about this until now. Denny Duquette came back! Well, not really Denny Duquette, but Jeffrey Dean Morgan, the actor who portrayed the late, great Denny Duquette on "Grey's Anatomy."
Thursday night's "Grey's" special episode was hosted by Morgan. OK, I know I am going to sound like a teenybopper now, but I couldn't stop looking at his handsome smiling face and listening to that warm drawl. "Grey's" fans loved Denny so much that they clamored to have him come back from the dead. Thursday's episode was the writers' answer (plus a cameo in a recent episode in which Meredith "dies" and sees Denny and others from beyond the pale).
Actually, I'm not behaving like a teenybopper, because the teenies wanted Izzy to get together with Alex. Alex? That cad, that lowlife, that uncaring, insensitive jerk! (He has improved now that he's gotten together with the ex-Mrs. Dr. McDreamy.)
I think the writer's answer was the best one. How do you bring a character back from the dead unless you go the Patrick Duffy "his death was just a dream" route on "Dallas." Bringing Denny back as his twin brother would also be lame. No, let Denny be dead, and show the devastating effects of grief, sorrow and mourning over a truly loved person. His death undid Izzy, for a time.
Why did everyone (except the teenyboppers) love Denny? Why weren't viewers willing to let him go? Because he was the ideal man. The head writer says, in fact. that he was HER ideal man. A mature man, a true man - sweet, kind, warm, funny. The chemistry between Morgan and Katherine Heigl, who plays Izzy, was real. As one viewer wrote, Denny blended "warm charisma with unbridled masculinity." He was strong, but also, as a patient awaiting a heart transplant, very fragile.
Part of Denny's character came from the writers, of course. The rest came straight from Morgan. The fact that fans loved Denny so much is testament to his good acting. Poor Morgan. His character was killed off in "Supernatural" too. He is a ghost/memory in "Weeds." Let's give Morgan his own TV series (not as Denny) where his character isn't killed off. Or let's give him some leading roles in movies. I'll watch!
Posted by Julie at 6:44 PM