JOURNEY TO THE CROSS 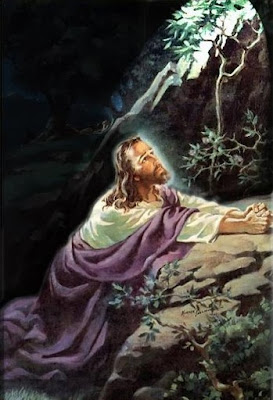 This painting of Jesus at Gethsemane is
displayed on a table in my home at Lent.
Thursday I read an interesting story in the Bismarck Tribune, describing a program called "Journey to the Cross," an interactive Stations of the Cross for Protestants. I was reluctant to abandon my regular Good Friday evening church service, but I am so glad I drove all the way out to Good Shepherd Lutheran Church's North Campus to attend. It was a profoundly moving experience for me. I cried at a number of stations, and other people were dabbling their eyes and sniffling.
The lights were dimmed in the large room. Twelve stations were each enclosed by three-sided screens of dark cloth. At each station, a small lamp threw just enough light for one to view the objects and read the signs containing the Passion Story and directions on what to do. We were asked to respect other people's contemplation time and not enter a station until someone was ready to leave it. Music of an almost Celtic nature played in the background.
At Station One, we were greeted by three televisions, all with blank screens blaring static. We were asked to turn off one of the TVs and acknowledge the static and noise in our minds and hearts, and the fact that in the hustle and bustle of our lives we often tune out God. On the floor at Station 2 was a pair of men's sandals centered on a trio of palm fronds. There, we were to focus on what it meant for the eternal God to become man.
A table at Station 3, "Mary Annoints Jesus," held cotton balls and vials of fragrant oil. I put a couple of drops of oil on a cotton ball and placed it in my pocket so that the fragrance accompanied me through the rest of the journey. At Station 4, we picked up a bunch of coins, feeling their weight in our hands. Are we, like Judas, tempted to betray Jesus over material things?
Station 5 featured the first step of communion, breaking bread, dipping it in oil and eating it. Station 7 was the second step of communion, where we drank wine and remembered that Jesus drank the cup of suffering to save us. At Station 8, we held "the rope" that bound Jesus' hands after his arrest. Station 9 featured a very realistic whip and crown of thorns, with drops of "blood" dripping from the thorns. That was a pretty powerful image, but there was more to come.
Station 9 affected me the most deeply. Each participant wrote one of his/her sins on a piece of paper and nailed it to a cross. The subject of Station 10 was Jesus' death. We snuffed candles and thought about the darkness "that the whole world - and heaven itself - must have felt that day."
Station 11 had a large slab of stone - the stone that sealed Jesus' tomb. Station 12, of course, was The Resurrection. As at some of the other stations, we were invited to write in prayer journals.
At the end of the journey, we dipped our fingers into a baptismal font and made the sign of the cross on our foreheads. I don't believe I have had the sign of the cross made directly on my forehead since I was baptized.
It was a most uplifting time, and at the same time very grounding. By the time I had taken all the twists and turns on my journey around that room, I had found peace with a situation that has troubled me greatly of late. I think that the use of interactive materials and the engaging of all five senses greatly amplified the experience for me and I am sure for others. 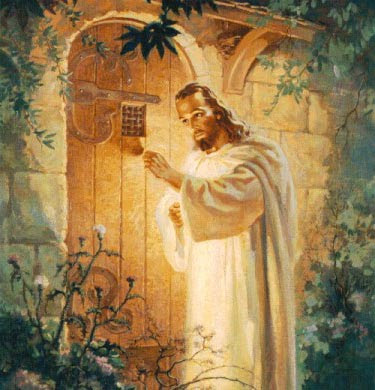 This picture of Jesus Knocking At The Door
is also on display in my home at Lent.
Posted by Julie at 4:41 PM

Labels: Journey to the Cross

uhm?? who was the artist of that painting??? :)♥can u email me? this is my mail... sussiey_g@hotmail.com

It is "Christ at Hearts Door" by Warren Sellman, was said to have been inspired to do this painting back in the Mid 1900s by the passage found in Revelations 3:20, "Behold, I stand at the door and knock: if any man hears my voice, open the door."