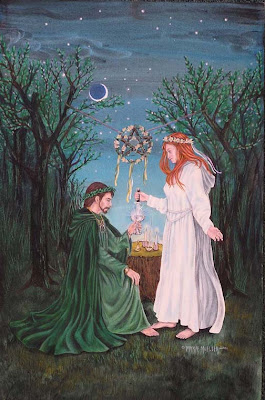 Tonight is the Eve of Beltane, one of the two most important Celtic festivals of the year, or, as you probably know it, May Day. It is properly observed from sunset April 30 to sunset May 1.

On Beltane (or Beltaine) Eve and its counterpart, Samhain Eve (or Halloween), the veil between the two worlds is at its thinnest. But unlike Samhain, when spirits of the dead roam the world, on Beltane Eve it is the fairies who are returning from their winter respite, carefree and full of fairy delight and mischief. Beware, tonight the Queen of the Fairies will ride out on her white steed to entice humans away to fairyland. If you hear the bells on her horse, turn your face away, or she may choose you!

More properly, Beltane is a Gaelic festival, celebrated by those in Ireland, Scotland, and the Isle of Man. (Other Celts, like the Welsh, had similar celebrations). The name Beltane means bright fire, bale fire, or Fire of Bel (Bel or Belinos being the Sun God). Halfway between the vernal equinox and the summer solstice, this day marks the beginning of the bright half of the year.

Preparations for Beltane began with gathering flowers for the Maypole and for wearing on the body and in the hair. Young men went May boughing or May birching, gathering garlands of hawthorn (Mayflower) and rowan (mountain ash) to hang over doorways and windows. On the Isle of Man, the youngest child of a family would gather primroses to throw against the door of the house for protection.

From the woods, villagers gathered nine different types of sacred wood. From this wood, two giant bonfires, or need fires, were built on top of a hill. The villagers drove domestic animals between the two fires to purify and protect themselves and the animals, insure their fertility, and bring luck. People also jumped over the bonfires (hopefully after they had died down a bit) in a fertility ritual. In Scotland, boughs of juniper were added to the fire for purification and blessing.

The Beltane celebration honored life over death and celebrated the rebirth of the world. Above all, it was a fertility festival, a symbolic union of the God and Goddess, of the divine masculine and the divine feminine. A young virgin, often dressed in white with a crown of flowers, was chosen to be the Queen of the May. Her consort went by many names, including the Green Man, the May Groom, the May King, and Jack-of-the-Green, often dressed in green and decorated with leaves.

In Scotland, bannocks (or oatcakes), were passed around in a bonnet. One bannock had been blackened by the fire, and the person choosing the blackened bannock became The Fool. It was the hope that all misfortune would henceforth fall on The Fool and no one else. Poor Fool, he also had to jump over the bonfire three times.

After the fires died down, the youth of the village would slip into the woods to go "A-Maying", to act out in reality the symbolic joining of the God and Goddess. No wonder they sing about "The Lusty Month of May" in "Camelot".

May Day morning, the young people would emerge from the woods, perhaps mussed and disheveled, to dance around the maypole, gaily decorated with colorful ribbons, flowers, leaves and garlands. Flowers were put in baskets and left on doorsteps for those who were too ill or too old to participate in the festival. From that, we get our modern day May baskets.

Beltane was serious business for the Gaelic people. They believed that the wheel of the sky would not turn without their intervention, and they did everything in their power - with their fires, celebrations and rituals - to ensure that summer returned each year.

Beltane was celebrated in English villages up into the 1950s. The festivities came to include mummers' plays, Morris dancing, riding the hobby horse, feasting and drinking. Tonight, the Beltane Fire Festival on Colton Hill in Edinburgh, Scotland, will attract 12,000 to 15,000 people.

There will be no May bonfires for me, in Edinburgh or Bismarck, and certainly no creeping into the woods to go "A-Maying." Instead, I will look at the nearly-full moon and play "Huron Beltane Fire Dance" by Loreena McKennitt a number of times. Since I can never listen to this music without dancing, I'll do a little springtime dance of my own. Beltane comes only once a year!

For a sample of "Huron Beltane Fire Dance," click on: http://www.quinlanroad.com/explorethemusic/paralleldreams.asp On the right of the screen, under the photo of the "Parallel Dreams" CD cover, click on the audio symbol next to the song title. 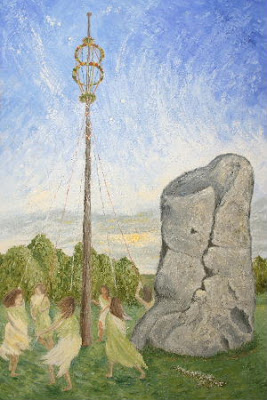 I came across your blog while searching for information on Beltane. Your entry was very informative and I enjoyed reading it. I thoroughly enjoyed exploring your blog and learning a little about you from your profile. We seem to have similar tastes in music and reading. Thank you for letting me visit and I hope I will be able to return again soon.

How wonderful for you to write about this for us! I wish I could see a bonfire in Scotland too!
i think I will make a "Queen of the May" doll for this month...maybe something to do with Guenivere(sp) from Camelot....I will go listen to the music link now!

Happy Beltane and May Day. ...For summer is a coming in and winter is a gone.... Hope your May Day weather is as beautiful as it is here in England, blue skies and hazy Sunshine, woke me this morning, with the dawn chorus singing their little hearts out, so many birds were singing today to welcome the May.

You are my kind of lady! Oh how much fun I am having Today reading and discovering YOU! You are my kindred spirit, too!!! Stay my friend! And one more time what a wonderful blog you got going.
Thank you!