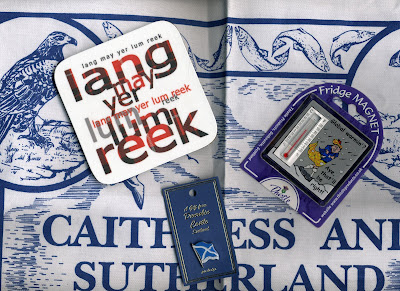 Last week was a week of peaks and valleys for me - one day hopes were raised, the next day they were dashed. But one of the high points was definitely a package from SCOTLAND! I really wouldn't have cared what was in the package as long as it came from Scotland, but my "new" cousin Shirl sent me some wonderful things from the Scottish Highlands, where the members of my Clan Munro came from and still live.

In the background in the photo above is a blue and white wall hanging of Caithness and Sutherland, the two northern-most counties in Scotland. There was also a big silk Scottish thistle, a fridge magnet, a pin of the Scottish flag, and a coaster that says "Lang May Yer Lum Reek." To Americans, reek means smell or stink so maybe Shirl was wishing "Long May Your Feet Stink." However, my niece Lisa, knowing my penchant for all things Scottish, had long ago sent me a small English-Scottish phrase book she found at a rummage sale. In there, I found that "Lang Your Lum Reek" means "Long May Your Chimney Smoke".

In an email today, Shirl elaborated that this is an old Scottish proverb that implies, "May you always have a fire in your hearth, may there always be food on your table and may there always be welcome for a stranger." I was delighted to add a SCOTTISH proverb to my repertoire of Irish sayings.

Shirl also sent a calendar and bunch of brochures and pamphlets about the area, so now I am drooling over Scottish wildflowers and cultivated flower gardens; highland stags, grouse and trout; misty moors and lofty mountains; Highland Stoneware (www.highlandstoneware.com), and even the big-horned shaggy red Scottish cattle. I so much want to visit the standing stones of the Shetland and Orkney Isles, just off the northern tip of Scotland. I want to climb the (low) mountains and descend the valleys. I want to see the lights of Inverness. I'd even venture down to the Lowlands to take a look 'round Edinburgh, walk the Royal Mile, see Edinburgh Castle and pay a visit The Palace of Holyroodhouse, residence of my old friend Mary, Queen of Scots.

One of the presents was in a gift bag from Dunrobin Castle, about a mile from Golspie, where Shirl lives. Of course I had to immediately google this marvelous French-influenced castle and its lovely grounds. 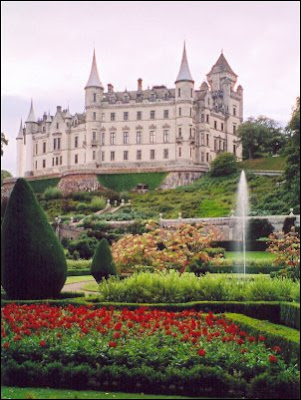 Of course most of all I want to visit Shirl, her family, and other Munro relatives. But, I doubt I'll ever get there. Dan and I had actually planned to go to Scotland on our 25th anniversary, but we had what you might call a "Reversal of Fortune" and never made it. But if we had gone we wouldn't have known about Shirl and the other relatives anyway. A month before our 25th anniversary, Dan had a heart attack and by the time the anniversary rolled around he was still feeling very fragile. We made it as far as Deadwood, SD, to celebrate. What a far cry from Scotland!
Our 35th anniversary is in two years, but I'm pretty sure we won't make it by then. But we could shoot for our 40th. I can dream, can't I?
Posted by Julie at 9:10 AM

Dreams are made to come true. How I wish that yours comes true.

One of my sil's is from Scotland. Her parents still reside there in a town called Blairgowrie, Perthshire. My brother and she married there so we went to Scotland for the wedding about 13 years ago. Alas we weren't there long enough to really see the beauty that is Scotland. I've always wanted to go back. I truly hope your wish comes true and you can experience all that you've dreamed of seeing there.

I forgot to mention that I love Lorena, too, wonderful singer!