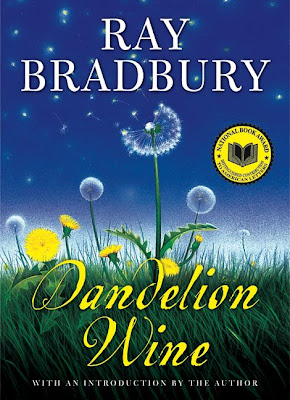 This month's books were a varied lot. Some I hated, some I loved. I bought one because it was the much-anticipated sequel to the book "Dandelion Wine," that has been on my top five list of books for 35 years. And I re-read two books I had read years ago, because I was packing up my daughter's books to ship to her in Washington, DC, and decided to keep two for myself (one she didn't like anyway.)
**********
I despised Ray Bradbury's "Farewell to Summer." It has none of the magic and innocence of "Dandelion Wine", the story of 10-year old Doug Spaulding, growing up in Green Town, IL in the 1920s. I loved the chapter about dandelion wine, that magical elixir that, when brought up from the basement and dusted off in the dead of winter, brings a breath of golden summer to people fighting colds, flu and winter blahs. The chapter on the mysterious killer, a re-telling of the "100 Steps" legend, was heart-wrenchingly suspenseful. And who could forget the story of how Doug's relatives, thinking they could make Grandma's ambrosial cooking even better by re-arranging and straightening up her kitchen, turned her instead into a cook who made dull, tasteless meals. It took Doug going into the kitchen in the middle of the night, tossing pots, pans and cutlery everywhere and dusting the silverware drawer with flour, to transform Grandma back into a heavenly cook. There were stories of the human time machine and the mechanical Gypsy fortune teller and the old lady who was never a little girl, all told through Doug's perceptive eyes. "Farewell to Summer" was more than disappointing, it was disgusting. It doesn't deserve any other description than that. I don't know why Bradbury waited all these years to publish it.
**********
I re-read "The Bell Jar," Sylvia Plath's semi-autobiographical novel based on her suicide attempt and subsequent hospitalization and shock treatments while she was a college student. I think most everyone knows about Sylvia Plath. She was a brilliant poet who married British poet Ted Hughes, had children, and later committed suicide by sticking her head in an oven. I read "The Bell Jar" in college, when in some circles it was considered cool to be crazy. I think the book has held up very well after all these years. Having gone through depression myself (though I was never suicidal), I can appreciate the accuracy and even the humor in this book. Too bad modern pharmaceuticals weren't available to her then, because she may have lived to write hundreds more brilliant poems.
**********
"The Secret Supper" by Javier Sierra was awful. It had an intriguing premise - find the secrets Leonardo painted into his "The Last Supper." But if you want to read a good book about solving clues and puzzles, and the Catholic Church, read "The Da Vinci Code" or "Angels and Demons" by Dan Brown instead.
**********
I had read "In the Lake of the Woods" by Tim O'Brien years ago, but was amazed how much I had forgotten. The entire book is based around two questions: "What happened to him?" and "What happened to her?" on the Lake of the Woods. I went to my book club session with my mind fully made up about both their fates, but when I left that night I had changed my mind about what happened to him. It was the persuasive arguments in a lively discussion with my fellow club members that changed my mind. And I think I changed some minds about what happened to her. I love the intelligent and insightful members of my book club.
**********
I purchased "Water For Elephants," by Sara Gruen, before it went on the bestseller lists. I love this book. Not evening liking circuses, I didn't know if I could love the story of a young veterinarian who joins a circus in the 1920s. In the process, he falls in love with an equestrienne/elephant rider, and is half in love with "Rosie", the dear elephant, as well. I am love with them all, especially Rosie, the intelligent and loving creature who delighted in stealing tankfuls of the circus' lemonade supply. Fortunately for our protagonists, Rosie was an elephant who never forgot. Fortunately, because she is the real heroine of this story. I loved the tales of the big top, the roustabouts, the circus train and the freaks ('cause deep down we are all freaks).
**********
I re-read "The Collector", by John Fowles, about a young Englishman who collects butterflies and ends up collecting young women against their will. I was fascinated by this character when I first read the book and I must confess I am still fascinated by him. I now call him by what he is, a serial killer, even though I did not know the term back then. Fowles' portrayal of this seemingly mild-mannered young man is still creepy, even with all those other books about serial killers proliferating the market.
**********
"Cage of Stars", by Jacqueline Mitchard, resounded so profoundly with me. For some reason, my book club gravitates toward books about Mormons, but unlike some of the other books we've read, this book tells the good side of Mormonism. Like Rosie, the circus elephant, I never forget. And I never forgive either, like the protagonist in "Cage of Stars." It is about the Mormon concept of reconciliation, and how even though her family does, the heroine cannot reconcile with or forgive someone who has committed a heinous crime against her family. There is someone I need to forgive right now, someone who hurt me terribly, but that concept is utterly foreign to me - absolutely incomprehensible. Especially since this person would never think she needs to ask forgiveness of me. I must re-examine myself and see what is lacking in me that I cannot forget and cannot forgive.
**********

Comment added at 6:50 PM. Oh. My. Lord. I decided to have Chinese takeout for supper tonight. The first fortune cookie had this message: "To understand is to pardon." Is that an example of serendipity or what? Can a message from God truly come in a fortune cookie? The second fortune cookie's message was: "A surprise announcement will free you." Yes, I think I already got that message on Friday. It was a total surprise, and yes, It has totally freed me.
Posted by Julie at 3:38 PM

You are quite a reader! I haven't read any of those...and am still waiting to get the TV series "Roar" which you recommended to me...someday! (We are still watching Monarch of the Glen...free from our library.)
You definitely got a message from those fortune cookies!