OH TO BE IN BISMARCK, NOW THAT SPRING IS HERE 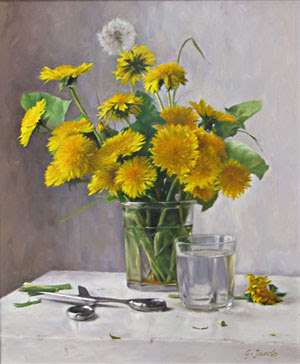 A BOUQUET OF DANDELIONS
by Gundula Jacobs
**********
Spring is a series of firsts:
1. First barbecued chicken of the season (last night), accompanied by my husband's famous Fredericksen potatoes - sliced, sprinkled with herbs, dotted with butter, wrapped in foil and cooked on the grill.
2. First thunderstorm (last night). It was pitiful, as thunderstorms go, but the rain did settle the dust.
3. Lawns dotted with dandelions (dents-de-lion, or lion's teeth, in French). I loved the sight, probably because it wasn't my lawn they were covering. Like my mom before me, I always put my daughter's dandelion bouquets in a glass of water.
4. Finally, a glimpse of red and yellow tulips.
5. Newly-leafed trees.
6. Clouds of white plum blossoms.
7. Irises poking up by the driveway. I have gorgeous lavender blue irises whose stems are extremely sturdy.
8. And - ta daaa - saving the best for last, The St. Mary's Central High School Marching Band's first practice. I had forgotten that every spring, this band from a high school just a few blocks from my home practices in the neighboring streets. It used to be a wonderful background to getting ready in the morning, but today, it blasted me awake when I had no need to get up early. I woke up with a headache, and the band only aggravated it. Not only that, I found out something I never knew before. The band practices a SECOND time later in the morning.
The second round featured even more vigorous drum solos than the first, with a low booming drum beat that resonated perfectly with the throbbing in my head: Boom, throb....boom, throb....boom, throb.
Oh, it's grand to be in Bismarck, now that spring is here!
There was no more sleep, so I started googling jobs, and found one I would really, really like to have, so I hope you all pray for me, to God or your higher power, that I get it. I have until Wednesday to figure out how to do Microsoft Access, or even figure out what it is. It seems that whatever job I want to apply for, I am lacking knowledge of some sort of computer software. I already wrote that I flunked the 10-key test. For another job I applied for last week (and also would really like), it was PowerPoint and Photo shop.
Egad, I am from the days of overhead projectors and cut-and-paste newspapering. Not to imply that the Tribune's methods were outdated, but I didn't have to do layout there, just write. Now, it's Access, like some form of mysterious ancient code that I'm going to have to try to decode before the villains get to it. (Sorry, I just read "The Last Templar.") I want to tell my potential employers, "I can write it, the rest will come." (didn't Kevin Costner say something like that in "Field of Dreams"?) But of course, that's not what they want to hear.
Today I also made a trip to the library to do some research. I could do it at home but my printer doesn't work and I wanted to print out my research instead of enlarging and reducing screens, which makes me dizzy. Then, I visited my local Barnes & Noble, with a credit burning a hole in my pocket. I found a book set in 14th-Century England, "The Illuminator", by Brenda Rickman Vantrease, and a book set in modern day San Francisco, "Summer of Glorious Madness," by Christy Yorke." I spent a grand total of one cent.
Posted by Julie at 2:48 PM

Well, whimpy or not, thunderstorms send me to the cellar and mind you, I live in CA where we define the meaning of whimpy thunderstorms and no one has cellars unless they are housing wine. There is something about lightning and noise that just doesn't do it for me. So much for moving to Bismarck.

I remember putting dandelions in a glass when I was a kid. What a sweet memory.

Marching Band - this is temporary, right??????? I swear they have got to be violating some sort of noise ordinance.

Kevin was right but the only people who believe that are the people looking for jobs. **sigh** Good luck good woman.

And a killing at the B&N. Perfect ending to the day.