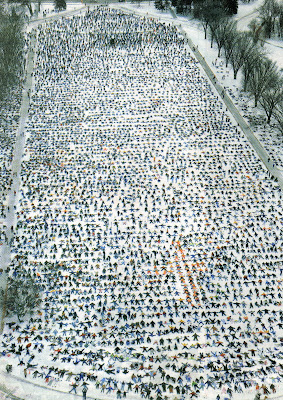 North Dakota re-claimed its snow angel record on Saturday with 8,911 people flapping their arms and legs in the snow. I should have been there. I excused myself on the grounds that it wouldn't do my arthritic knee any good. Now I'm ashamed of myself because a 99-year-old woman showed up on her birthday and made her first-ever snow angel. And an 8-year-old boy with cerebral palsy. I am ashamed of myself.
There's no doubt that if they had done this 20 years ago, Kristen and I would have been there. If they had done it in 2000, Kristen would have been there, as well as Val, our Venezuelan foreign exchange student. I would have probably tagged along too, even if they wouldn't have let Mom be in the same row with them.
Houghton, MI, recently had to cancel its attempt for the snow angel record, ironically because of too much snow. But if they or anyone else ever beats our record, and they hold another catch-up event here, I'm showing up. no matter how old I am. I'm too embarrassed not to.
Posted by Julie at 6:45 PM