IN THE DOG HOUSE 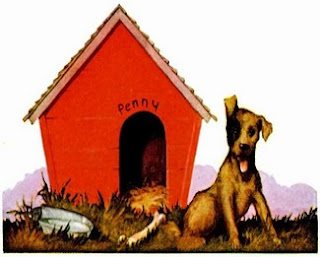 Anyone want to buy a dog, cheap? No, it isn't Penny. I just happened to find a picture of a dog house with the name Penny on it, with a brown dog who looks kinda sorta like Penny.
No, it's Gracie who's in the dog house. You just can't see her because she's hiding in the back of the house. She's trying to avoid Mad Mom.
I came home this evening to find out that she had chewed a hole in the couch cushion and scattered the foam all over the floor. While I was cleaning it up, she jumped on the coffee table and knocked a glass candle holder on the floor, breaking it.
She is the most destructive dog we've ever had. (Well, Jacques did chew up one shoe from every pair of shoes I owned, but after that he went straight and became my lover boy.) Beau, Lady, Penny - all were relatively good pups. And sweet, shy Brandy, who came to us as a three-year old, was raised as a kennel dog so she never had much chance to be a puppy.
Not long ago, Gracie chewed up a book that I had borrowed from a friend, so I had to fork up the money to buy her a new one. Yesterday, she gnawed on the back of one of my much-loved Thom McAn walking shoes. Thank goodness she didn't destroy it, as I probably wouldn't have found a replacement pair. AND, she is chewing up the linoleum in my bathroom!!!
Granted, my couch is worn and shabby, and my linoleum is crappy, but I don't have the bucks to buy a new couch or a new bathroom floor right now. Besides, I wouldn't buy ANYTHING until puppyhood days are over. Lord, let that be soon. And let me still have some money left in my pocket by then.
Posted by Julie at 7:59 PM