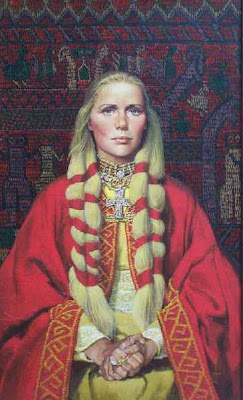 This is an artist's rendering of his/her vision of Kristin Lavransdatter, probably as she would have looked on her wedding day. In a previous post, I "reviewed" the trilogy of Kristin Lavransdatter books, but in this post I am showing her picture because when I think of this fictional character, I think of the significance of her name in Norwegian genealogy. She is Kristin Lavransdatter, literally, the daughter of Lavrans. One of her sons, whom she named after her father, was called Lavrans Erlendson, because her husband's name was Erlend. (And woe to the parents who named their child after a living grandmother or grandfather!!)

Therefore, if I had lived in Norway, instead of being called Julie Fredericksen, the name I took when I married, I would be called Julie Forrestsdatter, after my birth father. Tracing back from present days, my husband would be called Daniel Earlson, and his father would have been named Earl Hanson. Well, not really. If I am correct in assuming that Danish names followed the same pattern, they would be Daniel Earlsen and Earl Hansen.

Obviously, it gets very confusing when the surnames change from generation to generation. My particular family history is even more confusing, with variations on the spelling of first names, surnames, and what I call "place" names, lacking the real word for this type of surname.

It gets more confusing. My grandmother was also known as Julia Wangen. In Norway, family names changed to match the farm on which they lived at the time! My ancestors lived first on the Pladsen (or Plassen) farm, then on the Wangen farm. In America, my grandmother was always called Julia, and though I was christened Julia, I was always called Julie! In my lifetime, I have been named Julia Marie Munro, Julie Marie Johnson (spelling and surname changed when I was adopted at the age of 12) and Julie M. Fredericksen.

It's enough to make a genealogist's hair turn gray! Good luck to Kevin when he searches the records in Norway this spring.
Posted by Julie at 7:31 PM