THE MOST ROMANTIC SPOT ON CAMPUS - THE COULEE BRIDGE 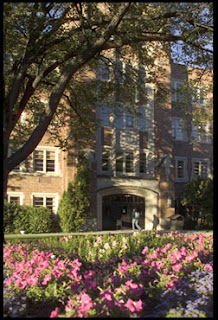 Last night I read in the latest UND Alumni Review that a developer (I'm not going to honor him by naming him) wants to turn the area north of the campus into a "Dinkytown" sort of neighborhood. Anyone who has been to The Twin Cities knows that Dinkytown is a charming little neighborhood near the University of Minnesota Campus. It's a sweet, low-key mix of little restaurants and smaller shops and service businesses. A Dinkytown cannot be created. It happens gradually over years and years. It is the antithesis of planned. An aerial photo accompanied the story. It featured the area where I used to live - UND's student trailer court. The English Coulee wound its sinuous way nearby. I used to take my dog, Beau, and a camera down to the walking path by the coulee. I'll never forget the day a great blue heron suddenly rose from the water, flapping its huge wings and startling me so much that I didn't even think of getting a photo. In the summer, teams used to play softball in the vast open field to the east, right outside my front window. It was heaven. 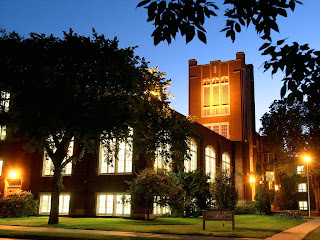 Now, there's an upscale housing develop-ment where the trailer court used to be. Right there, where I walked the coulee banks and waved to passing canoeists, where I picked wildflowers and snapped pictures of frost-covered weeds. Right there, where my friends and I flew kites as undergraduates; where, as a woman living in married student housing, I had a flower garden in the community vegetable plots. I am incensed. I have read dozens of stories of developments ruining nature, but this was my home, my little corner of the world. And all this happened without my being aware of it. 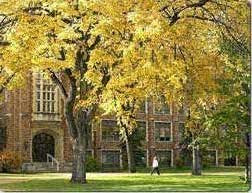 I have not been back to Grand Forks since about 1985, since our friends Fred and Sara moved to Arizona. I haven't seen the changes that came about after the flood ravaged the city in 1999. I'd like to visit the renovated Grand Forks; I don't mind those changes. But I, sentimentally, want the UND campus to remain the same as when I was a student there 40 years ago. I want the campus not to be bisected by an overpass (I did fight the project when I lived there, and we won that round.) I want the hockey arena to be the one that was built when I was a student (no, not the old barn) instead of the posh, overblown Ralph Engelstad Arena.
Why am I so bothered by these changes? Because my time at UND was GOLDEN, and I want those memories of it preserved as if in amber. It was a full, rich, stimulating period in my life that has not occurred before or since. Halcyon days, they were.
Coming from rural, isolated, northwest North Dakota, from a graduating class of 20 seniors, I came to a world of challenging lectures, foreign films, beautiful Gothic-style brick buildings and the taste of pizza and Mexican food (I had never had either.) I read plays by Ibsen, Strindberg and Synge. I went to student productions at Burtness Theatre and concerts at the Chester Fritz Auditorium.
I got over homesickness and my obnoxious Homecoming Queen roommate. I found a group of close friends who all belonged to the GDEs (god-damned independents). As a freshman I fell in love with a senior who courted me and then dumped me for my roommate.
A journalism/English major, I reveled in the heady world of the finest examples of English literature taught by the finest professors. I took creative writing and bloomed. I went to writers' conferences, newly created by Dr. Bob King. I was exposed to the poetry of T. S. Eliot, Sylvia Plath, Theodore Roethke. I learned to analyze a short story and write a concise paper.
One of my favorite haunts (because of all the classes I took there) was Merrifield Hall, the bastion of the Arts and Sciences. There, I took my English, French and journalism classes. (Only the journalism department was a disappointment.) I loved Merrifield's three flights of wooden staircases, its window seats, its marble steps, slightly hollowed from all those footsteps.
But there were so many other beautiful places on campus: The eternal flame by Twamley Hall, the mall crisscrossed by sidewalks and adorned with English-style bedding plants. The warm, welcoming lights of Chester Fritz Library. And the Coulee Bridge, with the requisite, oh so romantic weeping willow. As I lay in bed at night the gentle, reassuring tones of the carillon drifted over the campus.
I learned to live with two other girls in a dorm room; put in hundreds of hours of studying in the tower of Bek Hall. I grew intellectually and matured emotionally. I got thrown into the coulee
and marveled at spring in "The East" (oh, those double-flowering plums). I learned to love walking in rain and using an umbrella (I had never seen one in person - it was that dry where I came from).
When I was a senior, I met my husband-to-be at UND and introduced him to the Coulee Bridge. He loved it too. It was an idyllic time. In the ensuing 37 years, life has grabbed the two of us and shaken us around quite a bit. No wonder I want that long-ago UND to remain unchanged, hidden in the mists, like a Brigadoon of higher education.