WINTER ALONG THE MIGHTY MO 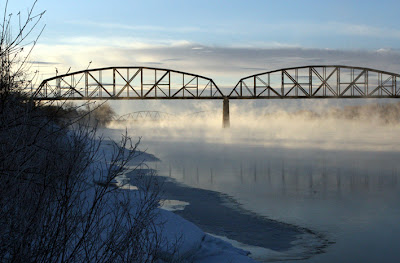 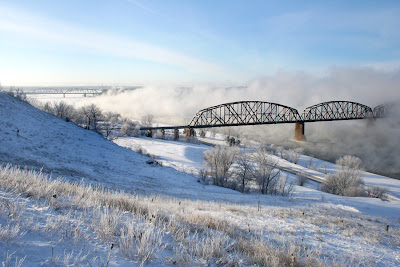 Above photos: Winter views of the old railroad bridge, which is on my left as I drive to work every morning. The photo directly above must have been taken right at the spot where I take the on-ramp onto Interstate 94.
For more than a year, my working days in winter have been bookended by sights like these and the ones below. Each day, I cross the Missouri River twice, going westward toward Mandan in the morning, and back eastward toward Bismarck each evening.
While I've been making my daily treks, I've come to see that my winter days do have touches of grace, due largely in part to the time I spend in the vicinity of the Missouri River, the Mighty Mo.
At this stage in my life, I don't spend a lot of time outdoors in winter. I mainly go from my front door to my car to the parking lot at work, with return stops at the grocery store and gas station. So most of my views of winter scenery have been from the vantage point of my car windows, frosted though they may be.
Grace. There is no other word for it. Every morning, when I traverse the river on the Grant Marsh (Highway I-94) Bridge, I have been graced by the sights I encounter during my commute, whether it be the winter fog or mist rising off the river, or the pure white plumes coming from the Tesoro Refinery on the north. (I'm sure the that steam isn't really pure, but I'm not going to think about that right now.)
Even though I'm not as closely in tune with nature as I should be, I still sense the wheel in the sky turning toward spring. Just few weeks ago, I would have raced the sun after work, challenging it not to dip below the horizon before I reached the turn for the Memorial Bridge. Now, the sun is still suspended high in the sky when I go home.
Each morning earlier this winter, I noted what time the sun crested the horizon (through my rear view mirror). One morning, just as I was climbing the overpass near the eastern edge of Mandan and Josh Groban was singing "You Lift Me Up", the sun "came up like thunder," to quote John Mellencamp. What a moment!
Grace. To spot deer and wild turkeys along the river. To see giant birds soaring on the air currents (too bad they were turkey vultures, not - as I thought - eagles). To see spring-like melted-ice-cream clouds on a supposed winter's day.
Even the most punch-drunk drivers, passing unawares through Bismarck-Mandan, would have a hard time driving through this valley without marveling at its wonders. A few days ago, the north-facing slopes just west of my exit were striated with snow, just as geological formations are layered with deposits of coal and other minerals. Today, the snow had all but melted, leaving the hillsides bare. 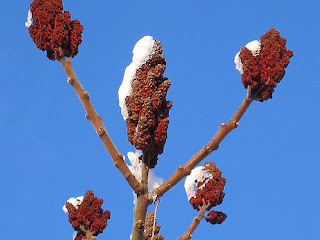 I have noticed the subtle signs as well: The color contrast between the red willow branches and the snow, or the patterns the staghorn sumac makes against a snow-covered slope. Sometimes my errands take me across the Expressway Bridge in the evening. If my timing is right, the sun turns the butt-ugly band of condominiums on the southeast side of the river into a city made of molten gold. 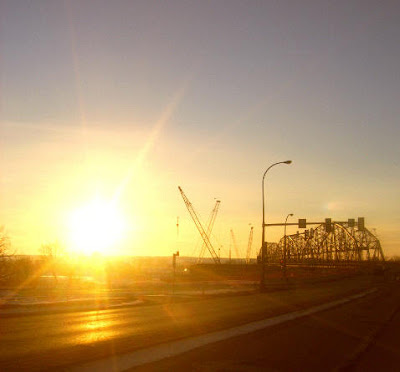 Giving much credit where credit is due, the attributed photos, all taken in and near Bismarck-Mandan in January and February, 2007, are Sky Spy photos from KFYR-TV. The photographers are:
Missouri River fog: Brian Austin, Mandan
Missouri River steam and Blue Skies, Ken Yetter, Bismarck
End of another day: Lauren C. Stewart, Mandan

Wow - great shots of the Railroad Bridge on the Mighty Mo - thanks for sharing them...