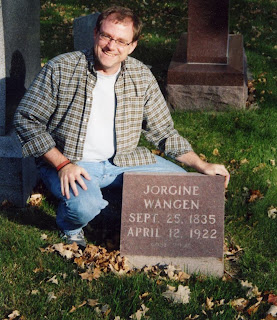 Pictured at left is my cousin, Kevin. No, he isn't a graveyard ghoul, just a generous genealogist. He's kneeling beside the tombstone of my Great-Great Grandmother, Jorgine Hansdatter Wangen.

I had not known about Jorgine until Kevin unearthed her. Oops, sorry, that was a really bad choice of words. Until Kevin researched our heritage, I should say.

At first I thought it incredible that neither my Grandma Julia, my Mom or my two aunts had ever mentioned Jorgine's existence. Then I did the math. Jorgine went to America eight years before Grandma was born, so she never even met her.

According to her obituary, Mrs. Wangen "was a woman possessed of the highest Christian character." At all times, it stated, "her kindly spirit pervaded those who knew her and endeared her to all acquaintances and close friends." I only hope that one of her great-great granddaughters (namely, me) will have such complimentary phrases written about her for her obituary.

Jorgine went directly to Mankato, MN, when she arrived in the United States in 1887, and lived there the rest of her life. How sad that Grandma and her family were never able to connect with such a close relative living so close to North Dakota.

To me, Jorgine's emigration is shrouded in mystery. Why did my great-grandmother leave Norway? Her husband had died in 1862; perhaps she could not farm the land alone. Kevin notes that the area of Norway my ancestors came from (Lesjaverk in the Gudbrandsdal Valley) had a severe famine in 1868 and had one of the highest rates of emigration in Norway. It's apparently a beautiful area, but not good farmland.

But why did Jorgine's son, my great-grandfather, Ole Olsen Vangen, stay behind? At least one of her children, a daughter, emigrated with her. But Ole continued to live on the farm, and he married my great-grandmother the following year. Perhaps he was already courting Margrete when Jorgine decided to emigrate, and Margrete might not have wanted to leave Norway.

Hopefully, Kevin may soon discover the answers to these questions. He's traveling to Norway in May, and I'm eager to find out what he learns there. I had always planned to research the genealogy of my Norwegian and Scottish ancestors, but I'm very happy to "allow" Kevin to perform that task. He's even promised to start researching the Munro side of the family. Like I said, he's a "generous genealogist". (More about my Wangen/Vangen heritage in posts to come.)

I learned from my cousin Kevin that Jorgine's daughter emigrated before her. "The daughter apparently married well and they had a very nice (big for the time) stone house in Mankato. I can see why Jorgine may have wanted to move from the log house farm in Norway." I can see why too, so that's a little bit of the mystery cleared up for me.
Posted by Julie at 7:59 PM

Jules, do you ever check this site
of the news from Norway?
www.aftenposten.no/english/bildeserier
JDM