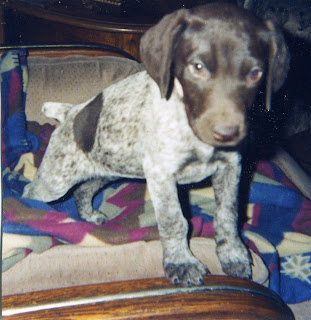 This little imp, a German Shorthair Pointer, came into our home on November 9, just in time to celebrate the 4th birthday of our Golden Retriever, Penny, on Nov. 11.

I admit it, I stole her name. I took it from two books I had read: "Amazing Gracie: A Dog's Tale," by Dan Dye and Mark Beckloff, and "The Saving Graces," by Patricia Gaffney. I didn't think Dan would go for the name, but he did. All my friends think it is THE most charming name for a puppy.

So what is so amazing about Gracie? It's what she did for Penny. After we had to put our Cocker Spaniel, Lady, to sleep in October, Penny was beside herself with grief. Anyone who says that dogs don't mourn is wrong, wrong, wrong. Penny moped around and went into a general decline. She was listless and sad. In short, she was depressed. We decided that although it wasn't the best time for us to get a new puppy, we had to for Penny's sake.

We didn't expect what came next. In addition to bringing Penny out of depression, Gracie helped Penny regain her sense of play! From her first day at our house, Gracie took charge. Only seven weeks old when we got her, she was never the shy, retiring new puppy. Immediately, she began wrestling with Penny, and Penny "fought" right back. Gracie actually inflicted pain, biting Penny with her needle-sharp milk teeth. Penny, however, only "gummed" Gracie, never once biting her back. Gracie would come out of the fray wet, but always unscathed. Penny, however, got nipped on the legs, the ears, the snout. Her tail is somewhat bedraggled from being snagged so many times.

To this day, Penny is exceedingly patient and gentle with her new friend. In addition to wrestling, they love to play tug of war with a stuffed animal or a rag. They can amuse themselves for hours this way, and then it's time for a rest (see photo below).

One Saturday night I fell asleep on the couch. When I woke at 2 AM, I found the two dogs sleeping side by side, with Gracie's "arm" flung across Penny's back. Dan says he's gotten some good photos of the two cuddled in sleep, so I can't wait to get my film back tomorrow.

It's a good thing that Gracie has been so good for Penny, or I would have been tempted to get rid of her. She's been a terror for us, being in the the doggie equivalent of the Terrible Twos. She has drawn blood from both Dan and me, having nipped us hard on the ears. During the holidays, she broke a number of Christmas ornaments and decorations. She's pulled full bowls of soup and tubs of butter off the counter. She stole a whole platter of hamburger patties and would have devoured them if she hadn't been caught in time. She loves to chew paper plates, napkins, toilet paper, socks, underwear, the couch, newspapers, anything she can get out of the garbage, medicine bottles, Dan's ties....I could go on and on. The only thing "Saving Gracie" is that I know she will eventually outgrow this phase.

Besides, I admit it: Her future is secure with us, because I have fallen in love with her. Not a fan of short-haired dogs, I have come to love how warm bodied shorthairs are. When Gracie sleeps on my lap or snuggles next to me when I'm lying on my bed, she is such a cozy little bundle. She likes to sit beside me and lean into me so that I can pet her and speaking loving words to her. She gazes adoringly up at me. How can it not be love? She also loves to have her soft little tummy rubbed. Every morning when I am getting dressed she comes into the bedroom to have a little bit of Mom Love. Could there be any better way to start the day? 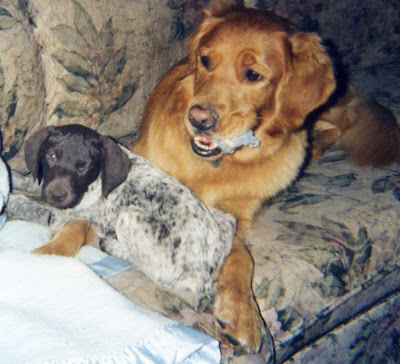