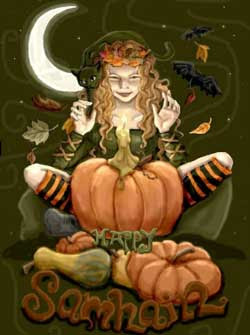 HAPPY SAMHAIN!
Here in North America, we call this night, October 31, by a different name. But to the ancient Celts and neo-pagans, it is Samhain, the eve of the Celtic New Year and a magically potent time.

I'll never forget my introduction to the ancient rites of this holiday. Reading Thomas Hardy's "The Return of the Native" in high school, I was forever impressed by the image of Eustacia Vye standing by a giant bonfire atop one of the barrows, or ancient burial mounds of England, the fire dying down and she standing alone, waiting patiently, waiting and waiting . . . for what?

Samhain (pronounced SOW-in or SOW-een) comes from the Irish Gaelic word Samhraidreadh, and means, literally, the end of summer. At Samhain, the sun is at its lowest point on the horizon as measured against the ancient standing stones of Britain.

The Celts believed that on this night, the veil between the two worlds grows thin and they could again see their loved ones who had departed from this life. Their custom was to provide lights to guide the earth-walking spirits along their way, by means of fires or candles.

This does not mean that hordes of evil entities crossed the veil. It was the Celts' deceased ancestors and other friendly spirits who, if they wished, could return to the land of the living to feast and celebrate with their family, tribe or clan. Extra chairs and places were set at tables, and food set out for any who had died that year. Food was also left at doorsteps and altars for the wandering dead. Apples were buried along roadsides or paths for spirits who were lost or had no one to provide for them.

In Ireland it was known as the Feast of Tara, the principal calendar feast of the year. In every household, heath fires were extinguished, then re-lit from the new fire of the year lit by the Druids.

The Christian church borrowed from Celtic lore and re-named this holiday Halloween, a contraction of "All Hallows Evening", the eve before All Saints Day. And ironically, it was the Christian church that introduced the concept that it was evil spirits, not our dearly departed, who came through the veil. The pagan Samhain was not, and never has been, associated with evil. Also, there is no truth to the theory that the word comes from the Aryan God of Death, Samana. 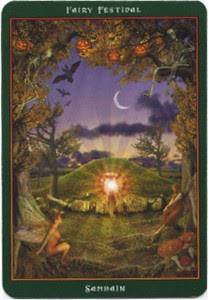 Samhain bonfires, or balefires, were lit on every hilltop in England and have continued to blaze down through the centuries. In the 1860s the Halloween bonfires were still so popular in Scotland that one traveler reported seeing 30 fires lighting up the hillsides all in one night, each surrounded by a ring of dancing figures, a practice that continued until World War I.

Young people and servants lit brands from the fire and ran around the fields and hedges, while community leaders surrounded the parish bonfire with a magic circle of light. Afterward, ashes from the fires were sprinkled over the fields to protect them during the winter month (and fertilize them!). The bonfires provided an island of light against the oncoming tide of winter darkness. Even on this Halloween night in 2007, bonfires lit up the skies in many parts of Britain. 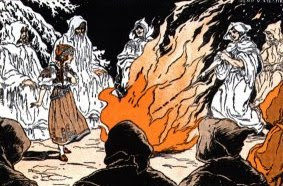 Thanks so much for writing this post...People often have the wrong image of pagans and druids...Hope you enjoyed a beautiful Samhain.

This is a really good and interesting explanation of Samhain. I was particularly pleased to see you emphasizing that Samhain has no connection with evil, horror films or ghosts. Hope you had a very Happy Samhain.

hoping you had a wonderful Samhain too, Julie.
Blessings from Leanne x

This is a great post. So many times people get the wrong idea about something and then it just continues on and on.

Happy Samhain to you.

I love this, thanks so much for the information. So many people do not realize the true origins of holidays that are celebrated, everything from Halloween to Easter.
So true what Janet said about how ideas get twisted into something else.
I hope you had a lovely Samhain!!

This is all so very new to me.

I discovered something about November 2nd, which I will share tomorrow.
You see it would have been my mum's birthday.

Glad you liked the rhyme.

I agree, that this is a wonderful post Julie. I appreciate many of the old Celtic traditions, and I'm glad that you are keeping them real, and sharing them with others.
I hope that your day was a beautiful one, and that today is too!

This was most interesting to read!!
Hummm....I have pets buried in my garden..all the while I thought it was the nocturnal visitors that raided my bird feeders..humm..my little Casper Halo and Ginger may still be walking around..I have not planted ~Freddi's ashes..yet.

We have such fun on Halloween..some
300 kids showed up!! I had the front of the house all decked out for them!!

What about your arm or injury???
Stay well and happy my friend xo
hugs Anna

Such an interesting story, and what a sight it must be to see all the bonfires lighting up.

I loved all you halloween post. I am especially glad you learned some of the tradiations about samhain and feel comfortable using some of them in your home now.
Hugs

We had only 4 trick or treaters...our neighborhood children all go to the Mall now.

Your post about the history of the celebration was so good to read!
Thanks for the research and information!

We had only 4 trick or treaters...our neighborhood children all go to the Mall now.

Your post about the history of the celebration was so good to read!
Thanks for the research and information!

Those early Christians certainly managed to brain wash people into believing Samain was connected to evil. Someone even sent in a letter to our local paper saying Halloween should not get a hold in Australia because it's a Pagan devil worship event .... it's 2007! There were several letters over the following days asking the writer how he/she felt about Easter and Christmas. *!*