THE HISTORY OF THE JACK O'LANTERN 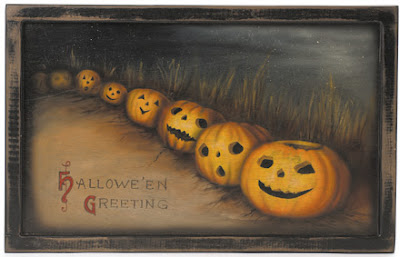 Did you know that the Scots and the Irish brought Halloween to America? As a person who is half Celtic (1/4 Scottish, 1/4 Irish), that make me proud indeed. And it was the Irish who introduced Halloween's most enduring symbol - the Jack O'Lantern.

History of the Jack O'Lantern
(copied from www.pumpkinnook.com)
The Irish brought the tradition of the Jack O'Lantern to America. But, the original Jack O'Lantern was not a pumpkin.The Jack O'Lantern legend goes back hundreds of years in Irish History. As the story goes, Stingy Jack was a miserable, old drunk who liked to play tricks on everyone: family, friends, his mother and even the Devil himself. One day, he tricked the Devil into climbing up an apple tree. Once the Devil climbed up the apple tree, Stingy Jack hurriedly placed crosses around the trunk of the tree. The Devil was then unable to get down the tree. Stingy Jack made the Devil promise him not to take his soul when he died. Once the devil promised not to take his soul, Stingy Jack removed the crosses and let the Devil down.
Many years later, when Jack finally died, he went to the pearly gates of Heaven and was told by Saint Peter that he was too mean and too cruel and had led a miserable and worthless life on earth. He was not allowed to enter heaven. He then went down to Hell and the Devil. The Devil kept his promise and would not allow him to enter Hell. Now Jack was scared and had nowhere to go but to wander about forever in the darkness between heaven and hell. He asked the Devil how he could leave as there was no light. The Devil tossed him an ember from the flames of Hell to help him light his way. Jack placed the ember in a hollowed out Turnip, one of his favorite foods which he always carried around with him whenever he could steal one. For that day onward, Stingy Jack roamed the earth without a resting place, lighting his way as he went with his "Jack O'Lantern".
On all Hallow's eve, the Irish hollowed out Turnips, rutabagas, gourds, potatoes and beets. They placed a light in them to ward off evil spirits and keep Stingy Jack away. These were the original Jack O'Lanterns. In the 1800's a couple of waves of Irish immigrants came to America. The Irish immigrants quickly discovered that Pumpkins were bigger and easier to carve out. So they used pumpkins for Jack O'Lanterns.
Below: a turnip JOL

Below: 19th Century Americans find that pumpkins
make better Jack O'Lanterns than does a turnip. 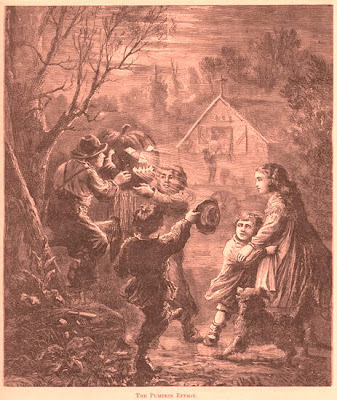 "THE PUMPKIN"
Oh! - fruit loved of boyhood! - the old days recalling
when wood-grapes were purpling and brown nuts were falling!
When wild ugly faces we carved in its skin
Glaring out through the dark with a candle within
**********
John Greenleaf Whittier, 1850.
Posted by Julie at 1:37 PM

Labels: History of the Jack O'Lantern

Awesome! I have heard of the history of the jack~o~lantern as well. I love Halloween!

I knew the history, but an interesting post none-the-less! great pics too Julie!

As I was reading the poem I was thinking back to my childhood in the UK and telling myself that my mum used Turnips then thinking I had it wrong, when I saw what you had written - teaches me not to read from the end of the post first ;)