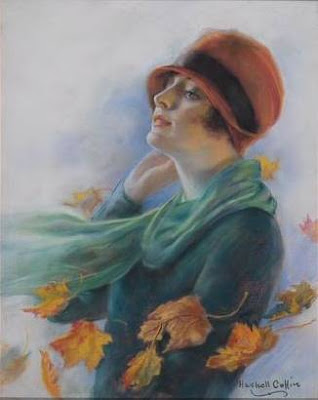 I've noticed that several blogs are celebrating National Poetry Day today. When I googled the subject, I found that almost all the sites originated in the UK, so I'm wondering if it is National Poetry Day there only. No matter . . . I'll just help the Brits celebrate their day with a poem by a beloved American poet.

Since the late Daisy Lupin started her Poetry Fest in June, I have been publishing several poems a month. I followed the themes she chose for June, July and August, and chose my own for September. The subject for September was fall, and I think I'll continue with that theme in October, and add Halloween poems as well. Usually when I post poems, I choose one of my favorite poems first and then add the illustration. This time it was the other way around. I actually found the painting first and then found the poem to go with it.

Did my unconscious mind associate maple leaves and a lady in a pretty scarf with Emily Dickinson's poem???

**********
The morns are meeker than they were,
The nuts are getting brown;
The berry's cheek is plumper,
The rose is out of town.
The maple wears a gayer scarf,
The field a scarlet gown.
Lest I should be old-fashioned,
I'll put a trinket on.
- Emily Dickinson, Nature 27 - Autumn
Posted by Julie at 6:06 PM

That is a fabulous poem for October...maybe our trees will get with it soon!
However, when they do turn orange (we have lots of maples here), it seems to never last long enough!

that poem belongs with that picture, doesnt it? Good choices Julie, very evokative of autumn!!

I love that image and poem, too!
My maple trees in California will be ready until December, warmer weather, ;-)

So amazing julie to find a painting so completely in tune with Miss Emily's words. Love this.

I also really like the autumn leaves painting..your painting of the month! We get huge "doses" of leaves to rake here...and used to burn the piles...now we just bag them and they go to a municipal compost. I'll get lots of "leaf" time this fall I'm sure!

Perect image for the poem!

To Autumn: "Season of mists and mellow fruitfulness"..Jonh Keats

We can surely see the images in the
poetry written by many ..fall is an oil painting!

I am deeply touched by your comments wishing me well..hugging you close NG

I love this poem! it is fun! thankyou and I am sure Daisy is pleased that you have continued her tradition on :)