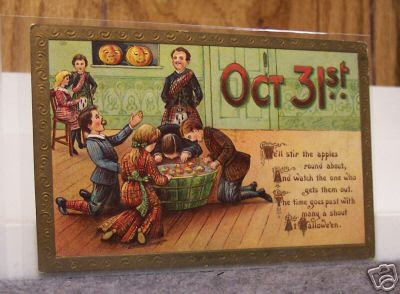 You seem to have enjoyed my posts regarding Halloween postcards and the stories behind them, so here are a few more. I hope I am not boring you with these.

I wrote in a previous post that Irish and Scottish immigrants brought Halloween to America. In these cards with Scottish themes, one can see the fortune telling games they brought with them as well. Besides the obvious tartan and kilts, these cards feature Scottish thistles, heather, the words "Auld Lang Syne" and "October 31st." In fact, I have seldom seen a Halloween postcard with "October 31st" on it that wasn't a Scottish card.

The first three cards in this post all center around bobbing for apples. In the card above, several young people test their apple bobbing skills. The first person to catch the extremely elusive apple would be the first one to marry. 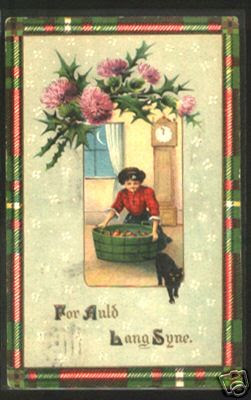 Here, a lady tries her luck all alone (except for her cat) at the stroke of midnight. If she captures an apple on her first attempt, her love will be returned in kind. Apples nabbed on subsequent tries represented fickleness, or ultimately, a sign from Fate to pursue a different suitor. 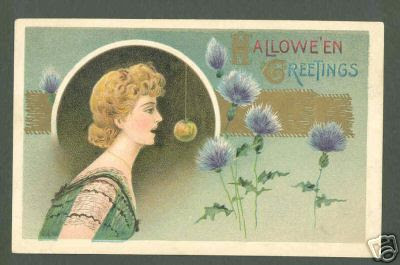 This variation on apple bobbing, in which an apple is hung from a string, is much more appealing in my mind. When I was a kid we always bobbed for apples at our school Halloween parties, and I have attended adult parties in which guests bobbed for apples. Adult or child, I hated it. I cannot stand putting my head in water and was always a spoilsport when it came to this "fun" game. 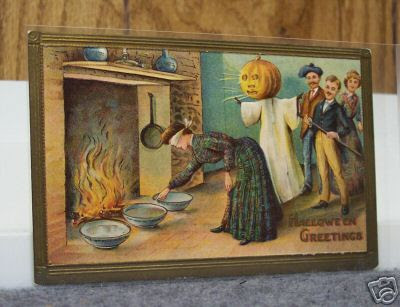 I wrote about this ritual in my post on the Victorian ladies' party. This time, gentlemen are included when the young lady tries to divine her future by choosing from three bowls containing clear water, "cloudy" or soapy water or nothing (the luckiest). These were often called "luggie" bowls, although the traditional Scottish luggie bowl had handles. 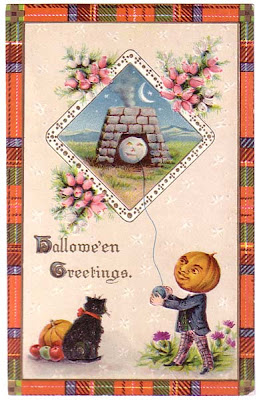 In this ritual, a person throws a ball of blue yarn into a lime kiln and recites a rhyme. The voice of one's future intended will emerge from the depths of the kiln. (Lime kilns were used to make quicklime, which had many uses, including mortaring and waterproofing buildings and whitewashing interiors.) 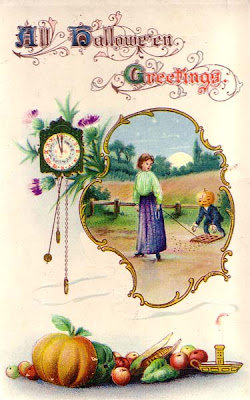 This Scotswoman is performing a ritual called "Raking the Rick", in which seeds are raked on Halloween night. Supposedly, the woman's future spouse will appear to gather the seeds. I have seen at least three variations on this card, and in each the man has a pumpkin head. He wouldn't be an ideal spouse in my mind!

A lady pulls a straw from a haystack in this card. Apparently, what she sees in the straw tells her if she will be a virgin on her wedding night. If it were me, I would do this without an audience!

The symbolism behind this postcard is unclear, but it may have to do with divining the future from a stalk of thistle.

In this fortune telling game eggs are broken into a bowl of water. Supposedly, one could read the future in the pattern of the yolks as they swirled in the water. Sometimes candle wax or melted lead was substituted for egg yolks.
(I gathered a lot of this information from the writings of Lisa Morton, author of "The Halloween Encyclopedia." Because I am of Scottish descent I love collecting these Scottish postcards. I own most of the ones shown here; the rest were taken from the Internet.)
Posted by Julie at 7:32 PM

THese postcards are great, Halloween has always been a much bigger thing in the USA than in the UK - at least during my lifetime. You'd certainly be struggling to find any kind of card to send over here. The bobbing for apples etc has always been around though along with various other divination games.

We played the apple bobbing but we called it apple dunking because some horrid kid would give your head a helping hand a little further into the water then you liked on a cold October night *!*

Not Boring Me- have you anymore?

In your last paragraph you answered the question I had. I was wondering if you owned these wonderful postcards. What a lovely collection!

I never get bored by your posts. You are a wealth of information. I knew about the bobbing for apples and throwing apple peels over your shoulder to see what letters they would form. I had read about it when I was young in one of the "Little Colonel" books. The entire series had been given to me by our elderly landlady. I devoured those books. While now they would be considered politically incorrect, they have always remained one of my favorite childhood reads. Unfortunately, I lost them somewhere along the path to here.

These are all so precious! Thank you for sharing them.

I too, would never want to bob in water for apples. Luckily, I don't remember ever having to. Well, I suppose that's not lucky, if it means I had a very dull childhood. -giggles-

I LOVE those post cards!. I had never heard of some of those rituals so it was an interesting post. Thanks
P.S. Stop into my blog I have some new photos of orbs I captured today