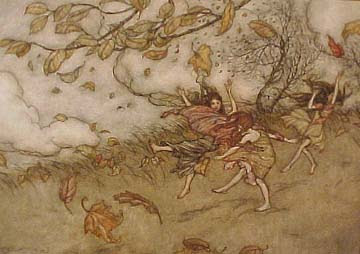 I borrowed this Arthur Rackham painting from Sheila's blog as it is very fitting for our weather here. It has been quite windy the past few days, so consequently about half the trees have lost their colorful leaves. As I was driving along Washington Street yesterday, I found myself enveloped in a shower of falling golden leaves. As much as I hated to see the leaves come down, it was a beautiful sight, and it was the beginning of my perfect day.

I was heading for lunch my with former supervisor at my old job. It was great fun catching up with my dear friend, learning about all her activities since she retired and hearing about her various family members, many of whom I know. It was also great fun gossiping about "that place" where we both used to work. Her twin sister still works at "that place" and I still have contacts there too. Yes, I do gossip occasionally. I think it was therapeutic for us to talk about the job for which we share the same feelings.

After lunch she had to go do family things, so I went to the movie "Elizabeth: The Golden Age" with Cate Blanchett reprising her role of Queen Elizabeth I. Being a true Anglophile I enjoyed the costumes, the castles, and the intrigues (poor Elizabeth has to deal with both the Spanish plan to invade England and the plot to assassinate her by supporters of Mary Queen of Scots.)

Cate does indeed tear up a lot of scenery as Elizabeth, but I spent most of my time watching Clive Owen as Sir Walter Raleigh. He is on my "hottie" list, for sure. I'm quite sure the screenwriter took great liberties with the plot. I DO NOT think Sir Walter was instrumental in helping Sir Frances Drake defeat the Spanish Armada. My English friends will know, but I still had great fun watching the movie. 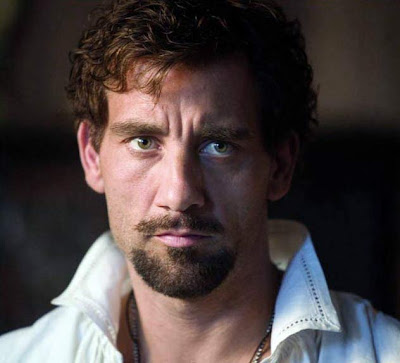 Speaking of hotties, I was thrilled to see a trailer for a holiday movie featuring two of my favorite hotties. "P. S. I Love You," to be released in December, stars both Gerard Butler, shown below with Hilary Swank, and Jeffrey Dean Morgan, shown with Swank in the bottom photo. Yes, I am a true, irrepressible romantic. 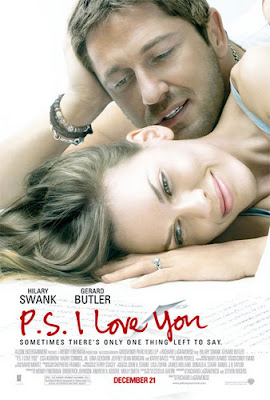 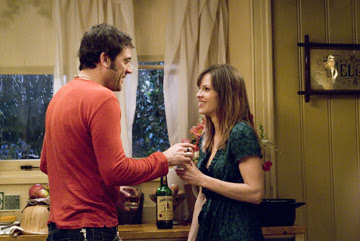 On my way home I stopped in a new little shop near my house called Ambiance. When I had been at my friend Kathy's book club cum Halloween party on Thursday night she had many lit candles, which added such a warm, glowing ambiance to her home. At Ambiance I found a tall candle holder with decorative metal that reminded me of the Elizabethan-type carvings I had just seen in the movie.
After that it was home where I found my Halloween swap box, then to some reading in bed with my doggies snuggling against me, then a dinner of Alaskan king crab with melted butter. It was on sale at a great price recently, and I used my rain check today. The crab was succulent and the wine was mellow.
All in all, a perfect day.
P. S. There was no photo below. I don't know how that got there, and don't know how to get rid of it either.

sounds like a pretty much perfect day! love the sound of the candles at your book club meeting... I can just see it..
oh and it has been windy here too but not that glorious autumn wind.. that blows cold and deliciously... but that hot awful drying wind that comes here.. drying everything bone dry in readiness for our summer fires :(

Don't you just love those kind of days:-) We had those awful winds here too for a few days and now our trees are pretty much all bare. Not too many colourful leaves to be seen at all anymore. xox

Oh, lordy! Both of them in the same movie. I may as well plan on being comatose with the lusty vapors while watching this one!

A shower of falling golden leaves. A lovely mind pic. Even though it is so sad to see them fall. I think a lot of us are rushing to capture the beauty of Autumn, before it all falls. -sigh- Like here and here.

Mmm, I bet the costumes and castles are yummy in the new film. That's what I watch a film for anyway!

Is it just me, or does that photo of Clive Owen, resemble a young Mel Gibson?

What a great name for a little shop... Ambiance. How could anyone pass it by, without a peek inside?!?

My winds are bad bad bad.
I am trying for you to figure it out how to delete that space, If there is a link, you can highlighted and delete it, maybe???

I always enjoy catching up with people from the old job...unfortunately, all the people from me old job are in Florida while I'm in Michigan, so we catch up on the phone. Vic & I have been wanting to check out the new Elizabeth movie, but never seem to have the time!

I agree with you: Clive Owen is hot! Happy your day was so perfect--you deserve it and more. :O)

Beautiful photos and LOVE the hottie ;-) One of my favorites is the hothothot Hugh Jackman.

This is my favorite time of year and though our 'indian summers' have contributed to a major catastrophy here in Southern California (i.e., the Santa Ana Winds and all the fires), it's still so fun to spend Halloween and (often) Thanksgiving in 70 and 80 degree weather.