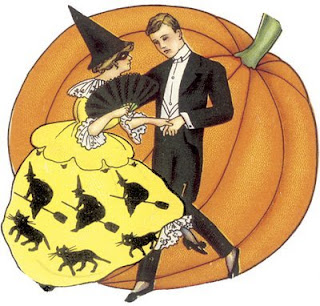 After the Victorian era had passed, elaborate Halloween parties for adults came into vogue, and continued to be popular into the 1930s. Costumes were magnificent affairs, sometimes made all of crepe paper! (Below) 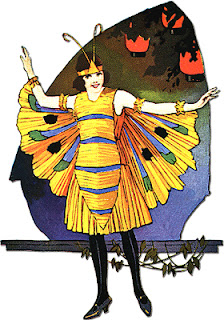 In planning her Halloween party, the hostess was not left high and dry for ideas. She had the current Bogie Book in hand, which gave her a multitude of ideas for decorating, costumes, favors, games and menus. 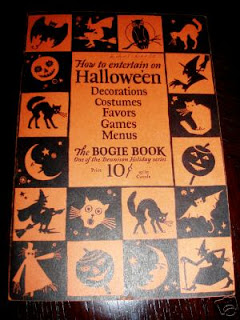 This page from a Bogie Book (shown below) gives an indication of just how elaborate these Halloween parties could be (click to enlarge). Made by the Dennison Company, the Bogie Books were published most years between 1912 and 1926 and thereafter in various other incarnations until 1935. 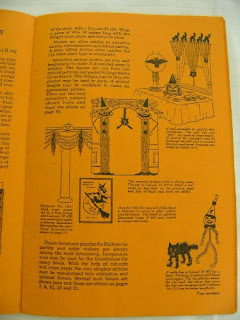 During the Victorian era, mostly natural decorations were used for Halloween parties. But by the early 1910s, manufactured party goods became widely available. The hostess had a dazzling and daunting array to choose from: crepe paper banners and streamers, tablecloths, party favors, paper plates and napkins, nut cups, cake toppers, blowers, party hats and place cards, most in the vivid colors of black, orange and yellow.

According to the Bogey books, any surface of the home was fair game for Halloween decorating: "Take stock with an eye to the possibilities of putting everyday objects to work. The floor lamps, radio speakers, davenports, chairs, mirrors, scrap baskets, umbrellas and even brooms and dry mops can be utilized as foundations for all sorts of interesting and grotesque decorations."

Of course, one must start with choosing just the right party invitation. The perfect one could spark interest in your gala affair as soon as it was received. "Did you ever get a party invitation that was so jolly that you made up your mind on the spot that you wanted to go, and lost no time in saying that you would? That's just the kind of invitation to send out for Halloween night." - The Ladies Home Journal, October 1916. 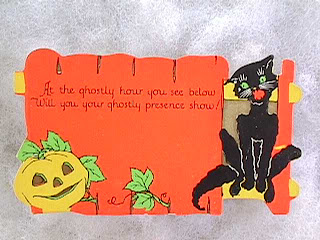 The hostess could don a Halloween apron,
if she wasn't wearing a costume (below). 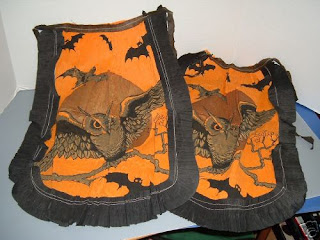 Dancing was a favorite activity for Halloween parties, and masquerade balls were all the rage. Special Halloween sheet music provided for lively tunes. Of course, the hostess had to keep the punch and cider bowls filled for the thirsty revelers.
Bobbing for apples and fortune telling games were still very popular, supplemented by manufactured board games with Halloween themes. Or, the party's theme could be built around bridge games, with highly decorative tallies and score cards (below). 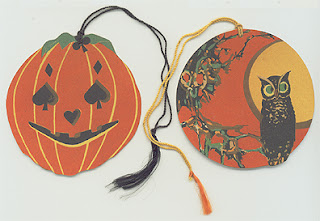 Food, of course, was a major part of the Halloween party, to be consumed either buffet style or at a sit-down dinner. The centerpiece was often a Jack Horner Pie: Decorated cardboard pie-shaped containers formed into the shape of a pie, holding party favors and fortunes.
**********
MIDNIGHT SUPPER FOR GROWNUPS
Needlecraft Magazine, October 1926
Witch's Broth
Deviled Lobster Magic Wands
Savory Cheese Tidbits
Orange Ice
Devil's Food Cake and Angel Food Cake
Cider Black Coffee Nuts
**********
Pieces of vintage Halloween ephemera that have survived to this day have become major Halloween collectibles are are eagerly sought after on eBay and from other sources. And, as you might expect, they have become extremely expensive.
Posted by Julie at 5:12 PM

Great post, I particularly like that wonderful 30s card at the top and those Halloween aprons - wouldn't mind having one of those myself:) Happy Samhain!

They knew how to do things in style didn't they, thanks for showing those images @{@

Julie
I love your pages which I just found this morning!
What a wonderful postcard collection.
Judy
Another green eyed lady of certain years :)You can find me at http://tocjudy.blogspot.com/