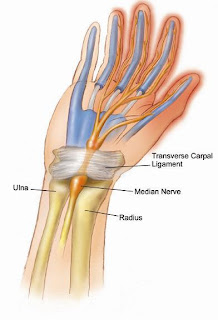 I went to the neurologist on Thursday after being diagnosed with carpal tunnel syndrome by my family doctor. Thank goodness my co-worker, who had severe CTS in both hands, didn't tell me before hand what they do (No pun intended!). I was given electric shocks and had needles plunged into my arms!

I was pretty brave through it all, although those last jabs to the thumbs really got to me. I was telling Dan about it afterward and he told me that when he had these same tests done on his "dropped hand" a few years back, he got to a point where he told the doctor, "Enough! No more shocks." So I guess I am braver than he is.

So, it turns out I have mild to moderate CTS in my left hand and very mild CTS in my right hand. I knew I didn't have a severe case in my left hand - people who do have pains shooting up their arms to their elbows, but I thought it would be at least a definite moderate in my case. I mean, I have a great deal of hand pain in the mornings, my fingers tingle as if they'd been "asleep", I feel like icy-hot liquid is rushing through my hands, and my fingers are numb (except for the little finger - see in the drawing how that nerve doesn't go to to the little finger, and to only part of the ring finger?).

My doctor doesn't recommend surgery for now and hopefully I will never need it. I will wear a splint at night, take NSAIDs and have hand therapy starting Tuesday. When I made my appointment at the Bone and Joint Center the receptionist told me she has CTS too and that Vitamin B6 helped her a lot. This made me very happy because Lila at Indigo Pears told me about B6 right after my diagnosis and I've been taking it for several weeks now, so I have a head start.

All this misery happens because the median nerve leading to the fingers has to travel through a very small, rigid space at the wrist. It is surrounded by bones on three sides and a tough ligament on the fourth. The nerve has to share this cramped space with tendons. Because of irritation and swelling, the space sometimes becomes just too small and the median nerve gets squeezed and pinched. It becomes very unhappy and reacts badly!

Of course, knowing me, I had to do a lot of research on the Internet when I found out I had CTS. One of the things that upset me is that CTS is often a precursor to diabetes. I don't have diabetes but my family history is rampant with it. Another interesting thing, which I learned from my neurologist, is that people who have had tennis elbow are prone to developing CTS. I did have tennis elbow in my left arm about 10 years ago.

People are on both sides of the fence regarding whether or not CTS is caused by repetitive movement. I type all day long - did I do this to myself? However, a 2001 study by the Mayo Clinic found that heavy computer use (up to 7 hours a day), did not increase a person's risk.

Or, I could have done this to myself by sleeping on my hands, which I like to do. However, it may just be genetic. Women are three times more likely than men to develop the syndrome just because their carpal tunnels are smaller, and mine may be even smaller than normal.

But enough dwelling on how or why it happened. Now I concentrate on fixing it. I'm glad I don't have a "surgery-happy" doctor and can try these alternative therapies instead. CTS can get better, I'm told.
Posted by Julie at 9:32 AM

I'm sorry to hear that you have CTS but as you said it isn't too bad and no surgery is indicated. Just keep taking the B6 and visualize your hands getting better.

My hubby had surgery on both his wrists but his was very bad. The doctor said it was one of the worst he had seen in awhile.

Julie...I knew you went to the neurologist but had no idea you had gone through those shock treatments.Sounds painful. Thankfully you don't have to have surgery.Take your vitamins and take care of yourself!
sending love.
xx

All I have to say is OUCH!
I know it must really bother you. I don't have trouble with my hands (except once in awhile when I type to much), but I have ostro arthitius in my knee so I know what it is like to be uncomfortable all the time. I hope the Dr. will be able to help you.

I'm so sorry that you have CTS, the treatment you had sounds awful but if it works it will have been worth it. Taking the B6 sounds like a really good idea and so does Janet's idea of positive thinking, hopefully your hands will get better eventually.

I'm glad you are trying the non surgical route first. Anytime we can use vitamins and therapy to help it is all good. I hope you see an improvement soon.
xo

Julie
Sorry to hear about your CTS. Try to keep to the alternate route as much as possible. I, too, have CTS and have refused surgery. Find out the metaphysical reason for CTS and get to the bottom of it rather than following the orthodox treatments, nothing will help unless you find the cause. Take some time to relax and enjoy yourself.
Blessings be

I am with Janet:
I am visualizing it!
No surgery if you can avoid it for a while.
Thanks to the internet for all the information available out there but sometimes it can be too much too, right?
Stay your best, take that vitamin, all b complex are the good

You are a strong woman indeed. Sorry about the CTS but with your knowledge and taking good care of yourself hopefully you can keep this at bay. Sending you all good wishes!
noni

Ick. Nasty treatment but thank goodness no surgery is recommended at this time. Thanks for passing along some very good information. Be well and lots of hugs, Annie

hugs to you dear Julie.. diabetes is rampant in my family too.. I don't have it either..

think positive about your hands and hold those crystals too! it can all help ease the pain xoxo

Wishing you all the best Julie. I hope all the treatments will help, and that you will feel better soon.