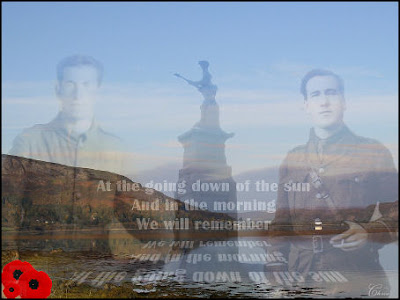 Tomorrow is Veterans' Day here in the United States (celebrated, of course, on Monday so some people can have a three-day weekend). In Canada, Australia and the United Kingdom it is called Remembrance Day. It is also known in some places as Poppy Day, and the original name was Armistice Day. The armistice ending World War I was signed at 11:00 A.M. on 11/11/1918.

Here in the U.S., the day will mainly honor World War II, Korean, Vietnam, Gulf War and Iraq War vets, especially those who have lost their lives. But in Britain, the memory of World War I is still vivid, even unto younger generations. I am posting this picture today in case some of you want to use this picture on your blog tomorrow, or send an e-card.

Yes, it is an e-card, and I have a special reason for wanting to share it with you. The two British WWI soldiers in the card are my two Scottish great uncles!~

William Munro, on the left in the photo above, was with the Seaforth Highlanders. John Alexander (Jack) Munro was a member of the King's Own Scottish Borderers. William was 25, and Jack just 23, when they were killed in France, within four months of each other.

The card was created by a wonderful British blogger named Chris. Her site is "A Touch of Class", http://www.tocchris.blogspot.com/. My Scottish cousin, Shirley Sutherland, worked with Chris to create this card. Since last March, when Shirl and I "met" via the Internet, I have learned a great deal about my Scottish relatives, including those who fought and died in the War.
I wrote extensively about William and Jack in my blog on Memorial Day. I hope you go into my archives and read about them. It's just a few posts down when you click on May archives (posted May 28).

I have felt a deep connection with these men, especially Jack, ever since Shirl sent me all the information on them and their brother Archie, who fought for Canada. Jack was a gallant soldier, the youngest Regimental Sergeant Major in the British Army, and a highly-decorated hero. He died doing something he had done several times before - saving the life of a fellow brother in arms.

But I think a lot about the every day Jack as well. I create scenarios in my head about him. I even asked Shirl if he had a girlfriend back home (we believe there was a special someone named Grace.) Jack is with me so often in spirit that I think I am going to have to write his story.

To send this free e-card or get the picture, click on the link underlined above. Once there, scroll down to "Other Places to Visit" on the left side of her blog and click on "Cards from Touch of Class". Choose "Remembrance Cards" and you will see this card.

I wear my poppy proudly and never forget the sacrifices made by our brave veterans everywhere! My hubby will march beside his father at a verterans parade...a sombre day as they march and remember...those that were left behind. Peace to our world
Julie this was a nice tribute to veterans everywhere! hugs aNNa

This is a lovely tribute to your great uncles Julie.
My Remembrance Day post if about my two great uncles that died in WW1 too.
We must never forget them. When I found the information about them on The Commonwealth War Graves Commission web site, a few years ago, I cried. I felt their loss so keenly, yet they died over 30 years before I was born.
Thanks for this lovely post julie.
hugs
xo

Julie...This is a beautiful post and tribute to your Uncles and all Veterans. I also really enjoyed your November poetry honoring Daisy. Enjoy your weekend.
:-)

What a beautiful tribute to your handsome, young uncles. How sad they died so young. And sad, too, that young men and women are still dying in wars. When will we learn?

I just posted a remebrance day tribute on my blog. Then afterwards started visiting the blogs i frequent and the first three(this is the 3rd) also have tributes posted. The whole world today is taking a few minutes, some time out, to remember the fallen. Their lives were bravely given, and their sacrifices not forgotten. What a tragedy that more servicemen and women the world over will continue to fall in the name of war.

Lovely post JulieMarie, it is this kind of story that turns all the casualty numbers for the various battles into real people. I've edited my post to show the entire poem that the lines 'At the going down of the sun' are taken from.

what a lovely tribute xo
my great grandfather fought in WW1 and died from complications of war. I also had a great-great uncle who fought in WW1.

Julie, that line you enquired about is from a poem by Laurence Binyon, full poem is on my blog.

Julie I am back today to say I am thinking of you because I read your comment on Sheila's tribute to Nov.11
May peace be with you today especially as YOU remember!
hugging you and sending love aNNa xo

What an amazing picture to have Julie! Lovely tribute to them. I`ve mentioned this on my blog today. I`m going over to check your friends blog now.

Dearest Julie, what a beautiful post in remembrance of those who fought for us and how absolutely touching that card is, showing your two uncles. I've just finished watching the Canadian Remembrance Day ceremonies on tv and it makes me tear up every time I see the faces of all those remaining veterans of WW2 and the one from WW1...makes you wonder the horror those eyes saw during the wars. xoxo

P.s. I sent you an email about Mr. Linky. Let me know if you got it.

A wonderful tribute to our Veterans. Thank you.