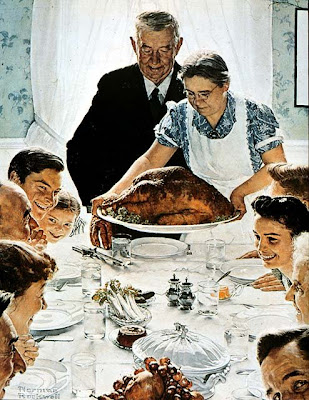 THANKSGIVING DINNER AT THE FREDERICKSEN HOUSE
~~~~~~~~~~
MENU
~~~~~~~~~
Roast Turkey
Mashed Potatoes and Gravy
Stuffing
Scalloped Corn
French's Original Green Bean Casserole
New England Yam Bake
Norwegian Lefse
Crescent Rolls
Whole Berry Cranberries
Pumpkin Pie and Whipped Cream
Perkin's Caramel Apple Pie and Vanilla Ice Cream
~~~~~~~~~~
The entire menu above is what we would be serving if my sister and her family were going to be here tomorrow. But since my sister, who is a nurse, has to work, and since we're not sure of her kids' plans, we're having the abbreviated Thanksgiving Dinner with only the items printed in white.
I like stuffing, but only in small amounts, and Dan doesn't like it at all, so there'll be no stuffing tomorrow. Besides, no one could beat my mom's stuffing so I prefer to go without. I like New England Yam Bake, but I think the others only eat it as a polite gesture to me. (They eat the sweet stuff on top and leave the sweet potatoes, which we use instead of yams.) Hence, no yam bake tomorrow. But I'll get them with it at Christmas! Although I like green bean casserole, I only make it if my sister is coming. And, since it's just the two of us tomorrow, we're skipping the desserts all together. (Pumpkin pie is okay, but I adore Perkin's Caramel Apple Pie.)
However, having said all that, I am going to print the recipes for the yam bake and the green bean casserole, because they are very good dishes and you don't have to have them just at Thanksgiving!
~~~~~~~~~~
NEW ENGLAND YAM BAKE
1 can pineapple slices [20 oz]
2 can yams [17 oz ea] (I use sweet potatoes -
only ONE can - see reference to yam bake above)
¼ cup flour
3 tbsp brown sugar
½ tsp cinnamon
1/8 tsp salt
3 tbsp margarine
¼ cup chopped nuts (I always use hazelnuts)
1 cup miniature marshmallows (or large ones cut into smaller pieces)
Drain pineapple, reserving ¼ cup syrup.
Line sides of a 10x6 inch baking dish with pineapple slightly overlapping.
(I use a round baking dish - works just as well).
Arrange yams (or sweet potatoes) in center.
Pour pineapple syrup over yams.
Combine flour, brown sugar, cinnamon and salt.
Cut in margarine until mixture resembles coarse crumbs; stir in nuts.
Sprinkle over yams.
Bake at 350° for 25 minutes.
Top with Marshmallows. Broil until lightly browned.
~~~~~~~~~~
FRENCH'S ORIGINAL GREEN BEAN CASSEROLE
2 9 oz pkgs frozen cut green beans

Mix all ingredients except 2/3 c onion rings. Pour into buttered casserole and bake at 350 degrees for 30 minutes. Top with remaining onion rings and bake 5 minutes more or until onions are golden brown.

P. S. The scalloped corn is made from the Better Homes and Gardens Cookbook. Can't beat it! 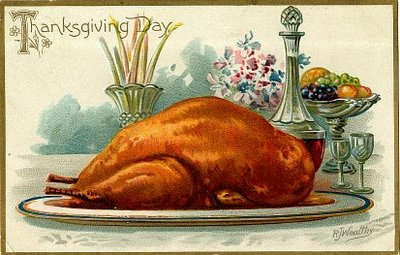 Have a lovely day! I'll be with you in spirit as we consume our various "feasts"!

We are not cooking much...letting "Thanksgiving to Go" from Whole Foods do most of it! I'm sure we'll still eat more than enough!

Have a wonderful Thanksgiving, Julie! Your menu looks delicous!
Kelli

I will be there in a minute! keep mine warm!
I had Thanksgiving once.. when I visited friends in Washington state, they made me a full Thanksgiving dinner even though it was not Thanksgiving.. it was yummy!
I am very blessed too, Julie, that you are my friend. love you ! xoox

Dear Julie hope you enjoy your Thanksgiving Dinner ....... those Pilgrim Fathers set sail from Boston Lincolnshire, a mere hop skip and a jump from where I grew up *!*

Oh yummy, I hope you have a wonderful day. Can you please explain to me what Norwegian Lefse is?

Norwegian lefse, I always tell people, is kind of like a tortilla, only made with mashed potatoes. The mashed potato/flour dough is rolled out thin like a pie crust and cooked on a lefse griddle. I like to eat mine with butter and sugar.

that all sounds lovely, although I havent ever tried a few of the dishes! Have a lovely lovely thansgiving meal, I'm glad youre my friend too Julie,

Happy Thanksgiving JulieMarie - the menu sounds good but I shouldn't think you'd want to do much afterwards:) Watching a football game sounds about right as a post prandial activity. I've had a Thanksgiving dinner many years ago when my American friends were here over the holiday.

Hi Julie. We had such a quiet Thanksgiving this year. We even just had the meal out. Quanah and Erin are driving cross country to Oregon and stopped for dinner somewhere in Colorado. Health issues in my sil's family kept everyone at loose ends so I never saw my brother. My sister is in Texas. So, it was just the three of us and we brought the leftovers home to Tanner and Gus. They were deleriously happy for the turkey windfall.

It's so funny. Ain't no way anybody is the South would dare serve stuffing of Thanksgiving. I'm not even sure what it is. I've only seen the stuff in the box. :-)

We have cornbread dressin' heavy on the sage, with boiled eggs chopped up in it. Topped with giblet gravy. The giblets being the stuff in the bag inside the turkey.

Stuffing is the same as dressing. I debated over which word to use. We use regular bread instead of cornbread, and no hard boiled eggs!