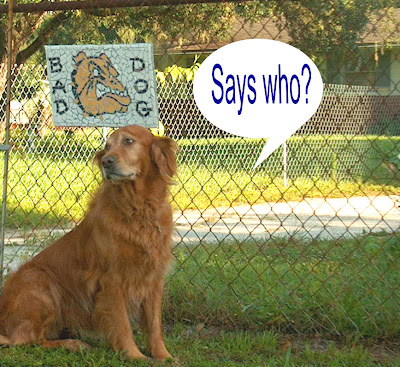 "YA BETTER NOT BLAME ME. I'M PENNY, THE GOOD DOG IN THE FAMILY. GRACIE'S THE BAD DOG. YA, GRACIE'S THE NAME AND BEING NAUGHTY IS HER GAME." (Photo from the Internet - not the real Penny, although Gracie is giving Penny gray hair.) 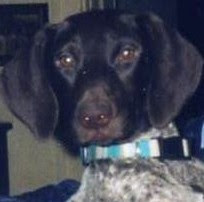 WANTED
GRACIE LOU FREDERICKSEN
REWARD. WANTED FOR VANDALISM, THEFT OF PROPERTY, GENERAL BAD BEHAVIOR AND HARASSMENT OF HUMANS AND PENNY ALIKE.
I am at my wit's end. Tonight - in just one night - Gracie chewed up a box of cards and the thumb out of one of Dan's gloves - Dan's sturdy, buttery soft gloves that he's had for ages, the gloves that keep his hands toasty warm when he has to work outside all day. And my cards - my oh-so carefully chosen, beautiful cards that I could send to my blogging friends who celebrate Christmas and those who observe Solstice/Yule. Every single card in the box, damaged.
If you have read the book "Marley and Me" you know the kind of dog I am dealing with. Although Gracie is a much smaller dog than Marley was, she matches him pound for pound in destructive behavior. Gracie may not have chewed up sheet rock, like Marley did, but she has chewed out the side of the dog house. The dog house, for cripes sake!!!!
I've already mentioned that on Sunday Gracie destroyed the gate that kept her captive in the kitchen. What I didn't mention is that because Dan wasn't able to replace the gate until a day later, she got into the mail on Monday and chewed up a postcard a friend sent me. Oh, just a postcard, you say? No, not just a postcard. AN ELLEN CLAPSADDLE Thanksgiving postcard, a rare, not cheap, vintage postcard of the kind that my friend knows I collect.
Yesterday morning, she was munching on one of my silk autumn picks. And regular readers will remember all the items she tried to bring indoors last summer. On Thanksgiving Day, she obviously thought that my niece's orange hoodie was a tasty treat, since she was constantly trying to nibble on it.
What to do, what to do? My immediate reaction, upon seeing my cards, was: "This dog is gone. She is so out of here!" I admit to uttering a few choice swear words. Dan was all mellow and forgiving, until after dinner, when Gracie had his glove for dessert. Then he was singing a different tune. I have threatened to get rid of her before, but let's face it, I won't do it. I am too softhearted, and Dan won't even countenance the idea.
Dan and I have had six dogs in our married life. All of them chewed things as pups, but they all grew out of it. Gracie has not. I say I can't afford obedience training, but I suppose what I mean is that I would rather spend my money elsewhere. I really don't even know if obedience training covers obsessive chewing. I guess I will just have to dedicate myself to be hyper vigilant rather than just vigilant.
Anyone want a dog, cheap???

YA SEE WHAT I HAVE TO PUT UP WITH?
SHE EVEN BUGS ME WHEN I'M TRYIN' TA TAKE A LITTLE NAP. 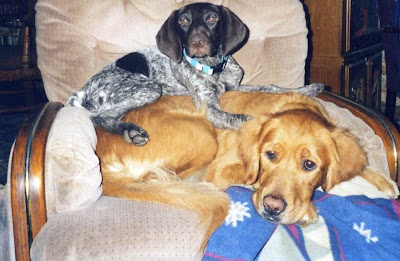 Good morning! I saw you on Annie's newest blog and thought I pop over to meet an otter and say hello! I share your pain with Gracie having lived through that with my Tess.

Long after puppy chewing was over, she would choose the most expensive shoe in my closet and ruin one every time whe was miffed at me. She kept this up until she had reached the age of 4 and had gone through all of the Italian leather that I had owned! She still lives with us so you know there can be light at the end of the tunnel!!!

Sounds as if you have your hands full with Gracie!! I've always had cats so you'd think I'd never have encountered this problem. Wrong! I actually had a cat that chewed things! He once chewed through a telephone cord!! The repairman said it was lucky it didn't shock him.

Oh bad dog! My pug isn't to horrible about chewing, but I did wake up the other morning to find graham cracker crumbs in the bed along with a half eaten pack I had forgot to put away the night before. Get your doggie some bones and see if that helps.

I think you should send the cards to people with pets who understand full well what you're going thru!

Ooooh, mine opens the refrigerator door.

I have read Marley and Me and thanked my lucky stars that I've not had a dog that comes anywhere near his or your Gracie's tendencies for chewing and destroying. Lots of disobedience of course. *!*