Oh, my goodness gracious me. My baby sister is 50 years old today! And like her heroine, Molly Shannon's Sally O'Malley, she promised me she was going to shout out, "Ahm Fifty! Ahm Fifty Years Old!" 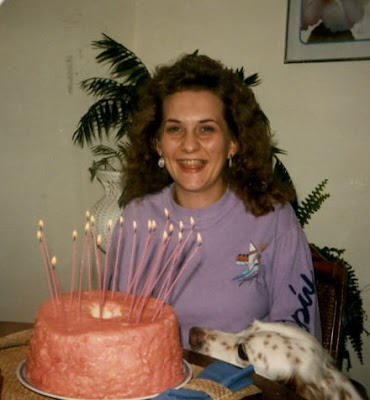 Another birthday, a few years ago
(Must have been the 80s!)
(Our dog Beau thought he should have cake too.)
She had to work the previous weekend, and also tonight, so I will be taking her out for lunch on Saturday. Do you think I should give her black flowers and black balloons? Well, since she didn't do that to me, I won't do that to her. But I am going to make her do the "Ahm Fifty" routine. (Actually, we like it this way: "Ahm Fitty! Fitty years old!"
Instead of "Over the Hill" gags I'll be giving this "old antique" a gift certificate to the Antique Mall, since she loves to browse it as much as I do. (Plus, then I have an excuse to go as well.)
I've already blogged about how proud I am of my sister, about what a difficult time she had as a young woman, how she put herself through nursing college while raising three kids, and how she was recently named employee of the quarter at the nursing home where she works.
(Below) Oh so serious! 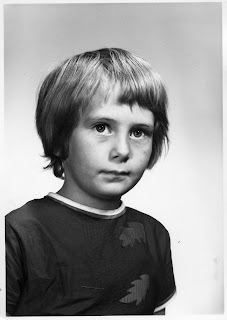 My sister's name is Gloriann, no middle name, but she answers to Glori and Gloria and Gloria Ann as well. I tease her that when she was in grade school she gave herself the middle name of Katrina. She absolutely denies this, but I know it's true!
She goes through life with an equanimity that baffles me (I am much more temperamental.) The only time I ever saw her get really upset was when she was in labor with her second son, Michael. "Give me drugs", she roared when the promised epidural was long overdue. I swear her head spun around a few times, a la "The Exorcist."
Actually, she had another name in the beginning. Someone in the family nicknamed her Baby Ann and that name stuck for quite a few years.
By the time Glori was born, I had had two rowdy brothers, Johnny and Ronnie. When mom left to go to the hospital, I pretty much told her, "Don't bother to come home if you don't bring me a sister."
I stayed with a girlfriend and her parents while mom was in the hospital. One day, after school, my girlfriend and I stopped at my stepfather's shop to cadge some candy money from him. After he gave it to me, he said, "Well you got what you wanted." "Yeah," I agreed, wondering if he wanted me to thank him again. "No," he said, "You got your baby sister."
Well, that was good news and has been ever since. I am 8 years older than she is, so we were not terribly close when we were younger. But now we are the absolute best of friends. My sister has survived a lot of things, including having our brothers haul her to Main Street in the wagon and leave her there in the middle of the street (fortunately there wasn't much traffic in Larson).
She is loving, giving, caring, a good mom, and the best damn nurse on the planet. I love ya, Sissie.
(Below) Baby Ann, another
dog lover in the making. 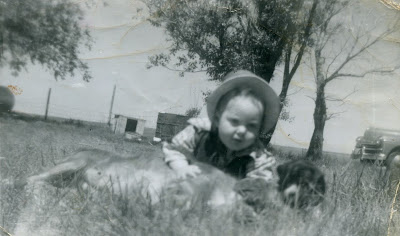 Happy Birthday to Gloriann - I hope she has a wonderful day.

Happy Birthday to you sister! Ask her how it feels to be part of the over the hill gang *giggle*

Wonderful memories a nice tribute(except for the Exorcist part, LOL!) to your sister!
Happy Birthday to Gloriann

Belated Happy Birthday to your wonderful sis - she's still so young, definitely not over the hill! Wait until the big 60 rolls around, now that's when you'll have to blow up the black balloons!!! Luckily nobody did that to me but next year may prove the worst one yet - I'll have to sign up for Medicare, yikes!!!

Sorry about your CTS Julie - hope all will improve soon.

Happy Birthday to Baby Ann:-)Love that nickname! lol So, she's now my age...ain't 50 grand? hehe Loved the pictures of her through the years and glad your mom brought you home a sister that time! lol xox

Julie, your words about your sister are just beautiful.. she is very lucky to have you as her sister xo

Oh, I'm late but the sentiment is still the same....Happy Birthday Gloriann!

Such a lovely tribute to your 'Baby Ann'! Glad you got what you wanted. I'm sure she loves you just as much.
Fun to visit you, as usual.

Julie I am so sorry I was positive I had commented here. I hope your sister had a great day. I have 2 sisters who are very dear to me and no brothers..!