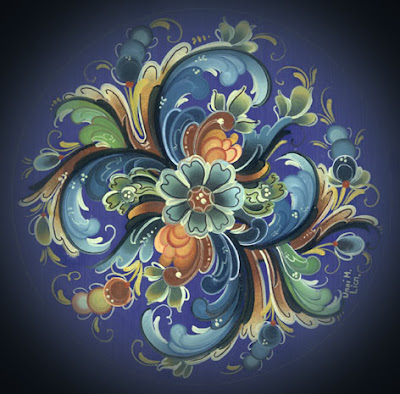 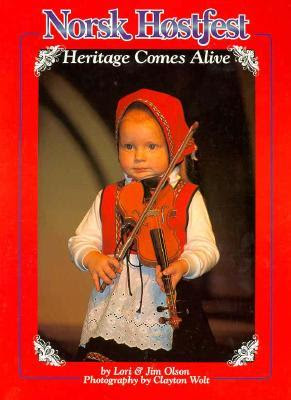 We're not huge fans of Scandinavian food, so we stopped for lunch at a Chinese buffet. Therefore, when we got to Hostfest (pronounced HOOST-fest), we were ready to hit the booths with offerings of handcrafted items from Norway, Sweden, Denmark, Iceland and Finland. Being half Norwegian, I wanted to find something from that country.

Would it be a wooden plate featuring the Norwegian tole painting called rosemaling (pictured at the top of the post.) Or would it be a hand carved tine (lunch) box, now used for storing trinkets (shown below). 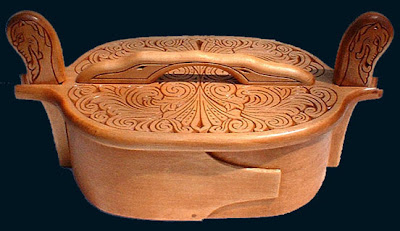 Maybe I should purchase a tablecloth of Norwegian hardanger (cut thread) embroidery. 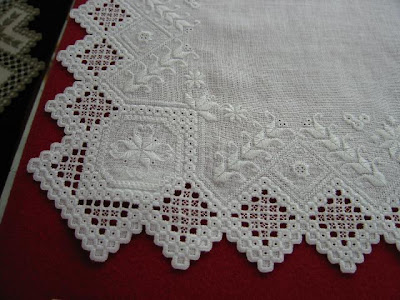 How about a nice warm Norwegian sweater? As with the rosemaling, I prefer designs in blue rather than in red. 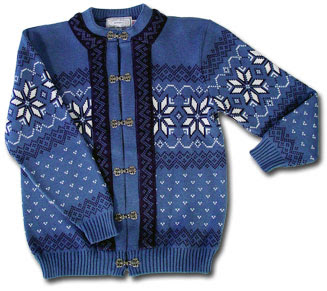 I do love the traditional Norwegian jewelry called solje (SOL-ya), made of sterling silver with either gold or silver "spoons". But where would I wear such an elaborate piece? 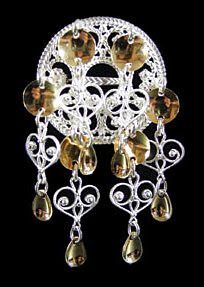 I passed up the ugly Nissen, or trolls, but I really fell in love with these dolls. Called Nisserness, they are Norwegian fairy tale dolls. 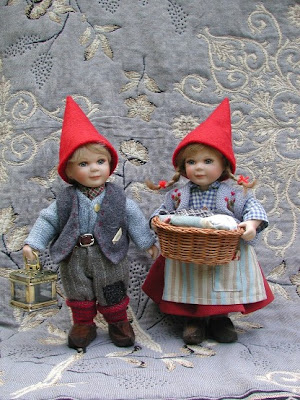 However, all these items proved too expensive for my pocketbook, so I brought this home: 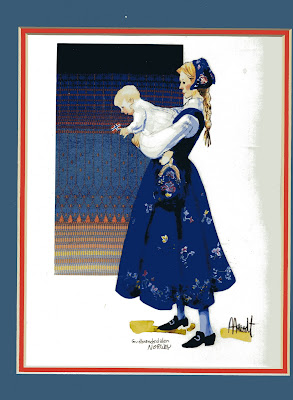 It's a print of a woman wearing the traditional folk dress of the Gudbrandsdalen region of Norway (and it's blue!). It's the area of Norway from which my Grandmother emigrated, so I was very happy to find this print.
I met Sharon Aamodt, the lovely woman from Washington state who paints these renderings of all the regional bunads, or traditional Norwegian costumes. I really like how she includes other traditional Norwegian items in her paintings, like the beautiful woven wall hanging in this print (click on the photo to see the fabulous detailing).
Perhaps someday I'll go back to Hostfest and purchase her print of a woman wearing the red, white and black holiday dress worn by the women of Gudbrandsdal.
By the time we had visited the Oslo, Reykjavik, Copenhagen, Stockholm and Helsinki halls, we had perused all the craft booths, visited the import shop, browsed the bookstore and seen the crafters' demonstrations. Our feet were hurting and we thought we could make room for a little "lunch", which is what Norwegians call afternoon tea.
Giving the lutefisk booth a wide berth, we sampled some "Viking on a Stick", which proved to be a deep-fried meatball. However, we settled on sharing a plate of Swedish meatballs with mashed potatoes and gravy, and some risengrot (rice pudding) with lovely raspberry sauce.
Sis and I knew we would not escape the lutefisk entirely, and we were right. An older gentleman and his wife sat down across from us and sure enough he had a heaping plate of the gelatinous mass which is codfish preserved in lye. The Montana couple, like hundreds of others, had driven their RV to the festival. "He won't get it at home", the lady said, referring to the aromatic fish. "He had a plate of it yesterday and one today. Tomorrow we go home." Fortunately, they were nice people and the lutefisk didn't smell to much.
I had wanted to sample some rommegrot (sour cream) pudding but couldn't remember where I'd seen it and was too tired to go back and look for it. Oh, well, there's always another time. This was the 30th anniversary of Hostfest, so I guess it will be around for a while longer.
Having grown up in a Norwegian community, my sister and I felt like we had been back home for a while. But the day was over, so headed back south to Bismarck, having seen our share of Vikings and heard our fill of accordion music to last us for a while.
Posted by Julie at 2:16 PM

This is an interesting post, it sounds as though there was a huge amount to see and do. I'm afraid I'd have had to buy some of the hardanger items, it's such an attractive form of embroidery. The Scandinavians are such skilled craftspeople. What a fun way to spend your Saturday.

I love attending festivals that center around a specific country or region. I'm not always brave enough to sample the food, but I'm sure to pick up something "I must have" from one of the booths.

I love festivals and I always want to leave with something and I am with you that sometimes it is out of our budgets but at least we learn something new and see lots of interesting crafts.
It seems to me that so far here I am the only one willing to try new foods. I am proud to say that I have tasted all kind of foods and flavors in this world. Yes, That makes me a connouseir and a food critic.
I am a great cook. By the way, Did you like my jams and peach butter?

Your description of the Hostfest was delightful--I felt I was there too (I love these kinds of events!)
Heavenly blues too.
Your print is lovely. Glad you had a good time which should carry you right into a good week!

That sounds like a wonderful day! I didn't know that you are half Norwegian. I used to correspond with a school teacher from Norway. He was my age and had taught himself English, since it wasn't taught in school back then.

That sounds like a wonderful day! I didn't know that you are Norwegian. I used to correspond with a school teacher from Norway. He was my age and had taught himself English, since it wasn't taught in school back then.

This is beautiful stuff, all except the fish..!
I had heard it was an aquired taste, but it is not high on my list to try.
I love the little boy and girl figures..!

I used to have a penpal from Oslo when I was in my early teens. I love that photo of the little girl with the violin. Have to own up to having owned two or three of the trolls in the past and I'm now wondering where they are ..... ugly? no! lol *!*

What a wonderful festival! I love the indigo blue used in the print you bought! I enlarged it to see the details in the weaving. My first weaving teacher was Norwegian.
BTW the best pastry I have ever eaten was at the tea room ofthe "Norway" part of Epcot after a "Viking" boat ride.

How fun to meet Norway through your post :-)
I have all the items shown, and my mother has a blue bunad like the one in the photo.